Mentor Graphics has introduced a new edition of its HyperLynx PCB design suite aimed at both extending its functionality and making the tool easier to use in the face of more complicated project challenges.

The suite, released today (April 4th), takes HyperLynx existing strengths in signal and power integrity analysis, and integrates them in a single environment alongside features such as 3D-electromagnetic solving, and faster rule checking.

“On multiple levels, PCB designers are finding it harder to deal with the challenges posed by new technologies and also to set up the tools in themselves,” said David Wiens, Business Development Manager for the System Design Division at Mentor Graphics. “So our goal has been to address both of those and keep complexity as low as possible.

In that context, HyperLynx’s analysis and simulation capabilities have been extended in four areas.

The new features within HyperLynx are led by an easier-to-use GUI. Setup times are shorter and the tool now automates much of the modeling and reporting task. There is PAM4 support as well as what Mentor claims in the first COM analysis solution. Also in the shopping bag is a move to ‘decompositional’ analysis to cut simulation time.

On that last feature, the tool is now capable, for example, of restricting the use of its 3D analysis engines only to irregular structures, pulling upon 2D and 2.5D solvers and capabilities elsewhere, as appropriate – this hybrid approach delivers a 10X boost in performance, the company says.

Accuracy has been verified prior to the release by working with partners such as Xilinx and Teledyne Lecroy to measure the correlation between final design results and simulations for power and signal integrity. 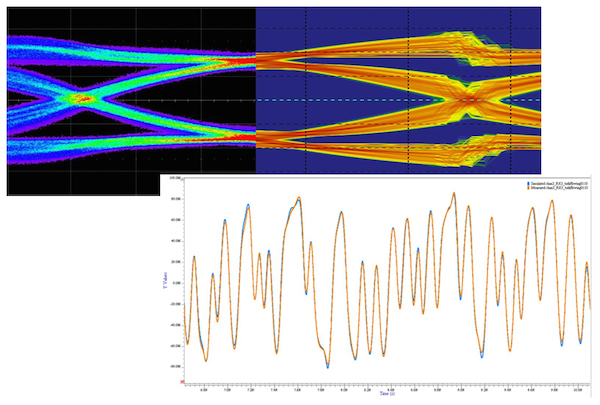 HyperLynx and the virtual prototyping wave

“A lot of this is about virtual prototyping,” Wiens said. “Eliminating iterations by having a comprehensive set of features and getting closer to – even achieving first-pass success as quickly as possible.”

Given the breadth of extensions and integrations within the new HyperLynx, Mentor plans to run a ‘global educational workshop’ series, in partnership with leading consultant Dr Eric Bogatin.

“The series will address new high-speed technologies, as well as best-in-class methodologies, tools and processes to effectively adopt the technologies,” a company statement announcing the program said.

Visit the HyperLynx website for more details of the new release and seminar series.