A Toshiba design team has described how to achieve more accurate thermal simulation for dynamic temperature change on silicon intended for use in harsh environments.

The team – comprising experts in analog, mixed-signal and automotive design – develops brushed and brushless motor drivers that form part of the system for applications such as engine throttles and on/off switches for engine bulbs.

The ICs have high current outputs and in turn generate a lot of heat. This raises challenges with regard to both their own degradation and their impact on surrounding circuitry.

In the case study design (Figure 1), the team also had to meet the Automotive Electronic Council’s AECQ100 qualification for harsh environments.

A critical element within the IC was its on-chip DMOS device that regulated the output current. Designing an AEC-qualifying DMOS element requires simulation and verification of its performance across a range of temperature changes as the transistor is turned on and off.

Previously, uniform temperature simulations were used. These are no longer sufficient given the increasing complexity and load placed on automotive systems.

To undertake dynamic exploration of heat effects, Toshiba used the Eldo electrothermal tool from Mentor, A Siemens Business. The thermal simulation tool supports fully-coupled simulation. It allows the local temperature of devices or individual cells to be simulated as variables.

The analysis flow used by Toshiba is shown in Figure 2. Enabling dynamic simulation also required the insertion of an estimated thermal network in the netlist. This was made up of thermal resistors and capacitors. 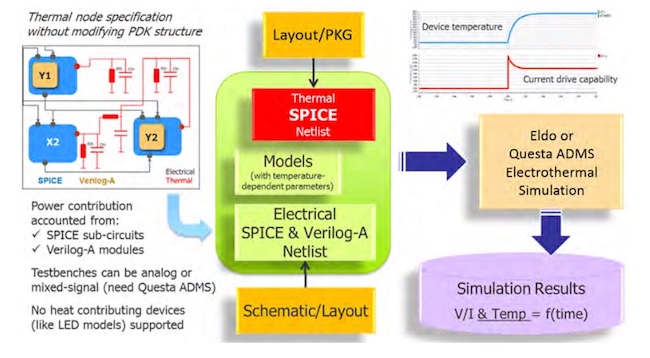 The diagram also shows an option to use Eldo or the Questa ADMS environment (incorporating Eldo capability) for AMS simulation: Toshiba opted for the Questa-based option.

The Toshiba team describes what it considered to be the various advantages of this flow more extensively in a white paper, ‘Toshiba verifies thermal contribution in motor control driver ICs’, now available for download.