Mentor Graphics today (February 16) launched its latest generation of emulators, Veloce Strato, boasting a 2.5X increase in gate capacity over the company’s existing hardware at the same power consumption. The first family member, StratoM, can scale from 2.5B gates to 15B gates using Link technology that can connect up to six emulators.

Jean-Marie Brunet, senior director of marketing, said that StratoM’s specifications are based on satisfying a minimum five-year road map. “Today, the big customers are in CPU, GPU and networking and they work in the 2.5B-gate area, perhaps a little above. Then within a year or so, they’ll be at 5B and then 15B a little later on.

“Emulators are not cheap. We have to offer something that has a realistic life cycle. While we don’t have anyone who will want Strato’s full capacity today, we have to show that we have thought ahead with each generation we introduce.”

Brunet also said that the launch represents Mentor’s strongest move to date to satisfy increasing demands for “verification and validation”.

“You have the traditional approach where you have the specification and you want to verify that the design meets it,” Brunet explained. “But then you also have the option [in emulation] to take, for example, a networking chip and run actual traffic on that in real time, so you also validate the performance in real-world conditions.

“We’re going to be talking a lot more about this in future.”

Strato lines up innovations in emulation 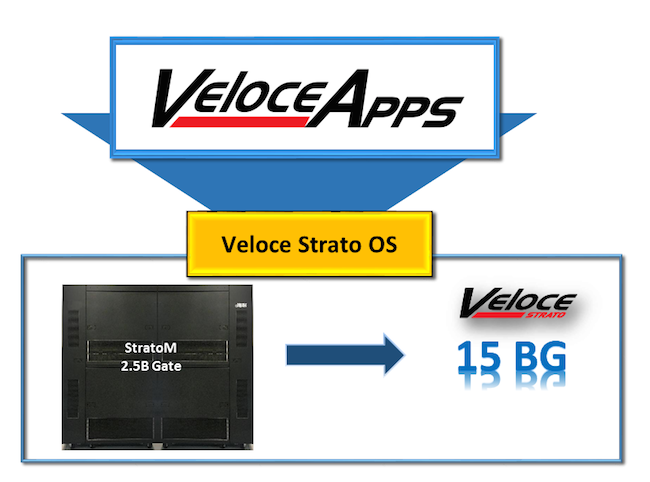 Strato includes a number of innovations when compared with the capabilities of Mentor’s Veloce2 generation, starting with the closely-guided Crystal ASIC that underpins the new emulator.

Key enhanced performance metrics – all benchmarked against Veloce2 – include a 3X increase in compile time, a 10X increase in debug visibility largely thanks to a switch to optical connections and a 3X increase in co-model bandwidth for output and input from ‘real world’ stimuli.

“Customers don’t look at just one of those things, but how they all contribute to throughput – basically turn-around-time – and together they give us a product that is about 5X faster,” said Brunet.

Mentor has developed a new operating system for the Strato platform – also enhanced for compilation, multiple use cases and debug – and made its new emulator fully backwards-compatible with Veloce2 software, including Veloce Apps.

“The new [Strato] OS can be used on the Veloce Maximus as well,” said Brunet. “It includes a number of features that will increase the efficiency and performance of existing hardware.

“At the same time, all Apps will run on both existing emulators and Strato and we will continue to support Veloce2 for the foreseeable future – right now, Strato offers capacity for the leading edge, so there are still going to be plenty of designs going through the earlier hardware.”

However, the Strato Link technology that will ultimately allow up to six of the new boxes to be aggregated for a 15B-gate design does not scale backwards to allow for combinations of new emulators with those from the Veloce2 generation.

Each StratoM has capacity for 64 verification boards up to 2.5B gates, and consumes 50KW fully loaded, the same as Veloce2.

“Power consumption has become incredibly important,” said Brunet. “It’s not just the VP of engineering who makes decisions about emulators but also the CIO and, because of the cost, the CFO. Because emulators have been moved out of labs into datacenters, the CIO wants to know, ‘Does it fit the racks? What’s the power budget?’”

Brunet said that Mentor has already installed StratoM emulators at a number of key customers. “That’s all gone very well and we now move to a full roll-out,” he said.