Mentor Graphics has launched the MicReD Power Tester 1500A with the goal of slashing test time in power electronics by identifying failure causes during the cycling stage.

Previous methodologies have required power electronics developers and users to test devices to destruction and then undertake separate lab analysis to find out what caused the failures.

The MicReD tracks the ‘structure function’ for each device during cycling to cut down the need for later work. This function shows how heat flows through a package from junction to ambient. By tracking it and comparing it to a ‘golden’ reference function, the tester can detect changes in different structure function curves that point to different sources of degradation in the package and device, such as delamination and cracks in the substrate.

Andras Vass-Varnai, product manager for MicReD in Mentor’s Mechanical Analysis Division, said that this ability to undertaken root cause analysis in real time contributes to a 10X reduction in test time.

Further benefits are achieved, he said, through the tester’s ability to handle up to three devices at a time (up to a combined 1500A) and a simplified touch-screen user interface that no longer restricts test operation to power specialists.

The device can test IGBT, MOSFET and generic two-pole devices, recording test data for each that points not just to failure causes but also their gradual occurrence over time. 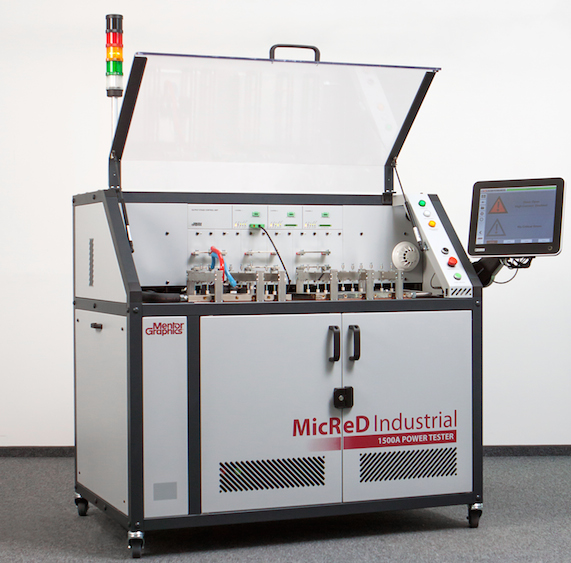 Mentor sees the IGBT market as a potential sweet spot. According to analyst group Yole Developpement, it is set to grow from around $4.5B today to $6B by 2018, largely driven by the markets for electric/hybrid electric vehicles and their chargers.

In a general sense, the MicReD teser is aimed at power designers, suppliers and companies involved in the delivery of high reliability products.

A number of these sectors do require suppliers to meet certain standards and methodologies for product design and delivery. Vass-Varnai said that MicReD is either fully compatible with these or that standards for power electronics do not yet exist, so there is no inherent issue here in reducing the need for lab work.