The 2013 edition of the International Technology Roadmap for Semiconductors has been published. Well, most of it has. But the latest set of tables underlines the slowdown in some aspects of scaling, particularly when it comes to metal interconnect.

A number of the chapters, including those on interconnect, front-end processes, design, assembly and packaging, and system drivers have yet to be completed for the 2013 edition of the ITRS, although they are among the most keenly anticipated. However, the roadmap team has updated tables for key dimensions such as the pitch of metal one to reflect the way in which scaling of this metric for density has temporarily stopped and may proceed in fits and starts from now on.

Our graph illustrates how estimates of metal-one (M1) half pitch using a staggered contact pattern – the metric once used by the ITRS to denote node size in nanometers – have changed since the predictions made in the 2009 and 2011 editions of the roadmap. Also on the graph shown here are the half pitches reported by Intel, as well as a widely reported estimate for its 14nm process. 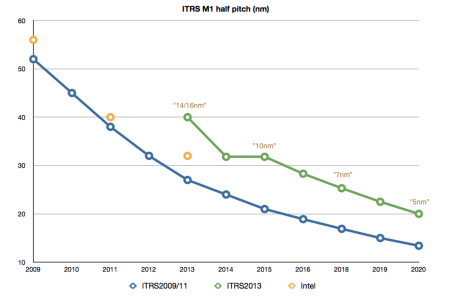 The ITRS executive summary explains: “The MPU/ASIC M1 trend leveled off at 40nm in the period from 2010 to 2013, and is anticipated in the 2013 ORTC Table 1 to continue forward on a 3-year technology cycle (0.5x every 6 years). It is possible that the industry will continue to press for the historical 2-year cycle (0.5x per 4 years) trend through 2017. The actual industry trends will be monitored in 2014 and 2015 for updates in future ITRS renewals.”

The ITRS has reintroduced node names to help align the measurements with actual production silicon, which are shown on the graph by their expected entry dates.

Although M1 has slowed down, other measurements will have an effect on overall density scaling, such as poly or local interconnect pitch and also M2 pitch, which seems to moving closer to that of M1, if not the same pitch.

To assist with density projections, the ITRS team is enlisting the help of researchers from Purdue University and their long-range dynamic TCAD modelling tools. The researchers aim to host tools to help model future processes as a publicly accessible resource on the Purdue NanoHub site.