Any simulation is only as good as the information you give it. Even an AI needs to be seeded in some way. Another increasingly important and allied technology, the digital twin, is no different. Work there emphasizes the need for great correlation between the virtual and real, as well as excellent feedback between the two realms.

Automotive vehicle (AV) systems design and development provides one recent example of how real-to-virtual partnership is raising the state-of-the-art in simulation. Siemens has joined with research company VSI Labs to develop more advanced analysis based on real-world trials and digital twins for autonomous vehicles.

The agreement leverages Siemens’ PAVE360 platform and the VSI Labs Capability Demonstrator. PAVE360 combines a range of tools – notably Simcenter PreScan, the Mentor Veloce emulator, and Simcenter AMESim – in a sense-compute-actuate loop to enable the thorough virtual test and validation of an automotive platform. The Capability Demonstrator demonstrator is a real-world development vehicle that can be equipped with the latest system components from third parties, open-source releases and innovations from VSI itself.

One obvious advantage of the agreement is that VSI will be able to deliver real-world data to feed and refine PAVE360. During the Covid-19 pandemic, VSI has inevitably lost the ability to present its demonstrator on the ADAS exhibition circuit, but it has been running regular US cross-country drives that allow developers to exercise and promote their products.

While VSI has continued to carry out ‘hard’, physical research during the crisis, its founder and CEO Phil Magney sees digital twins as essential now and in the future.

First, there is the simple question of scale: a 2016 Rand Corporation report estimated that validating an AV was as safe as a human-driven car would require 8B km of test. It can’t be done – and this is not simply a question of volume.

“It’s hard on the vehicle, particularly if you have a lot of new modules within it. Doing something like that 70 times a day has an effect,” Magney says.

Added to distance and intensity, there is complexity. AVs are systems-of-systems-of-systems that bring together technologies from multiple vendors (many new to the market), performing a wide range of interrelated tasks and often leveraging different ‘flavours’ of open-source platforms. Figure 1 shows companies that VSI is currently hosting on its demonstrator and the different tasks their various modules perform. 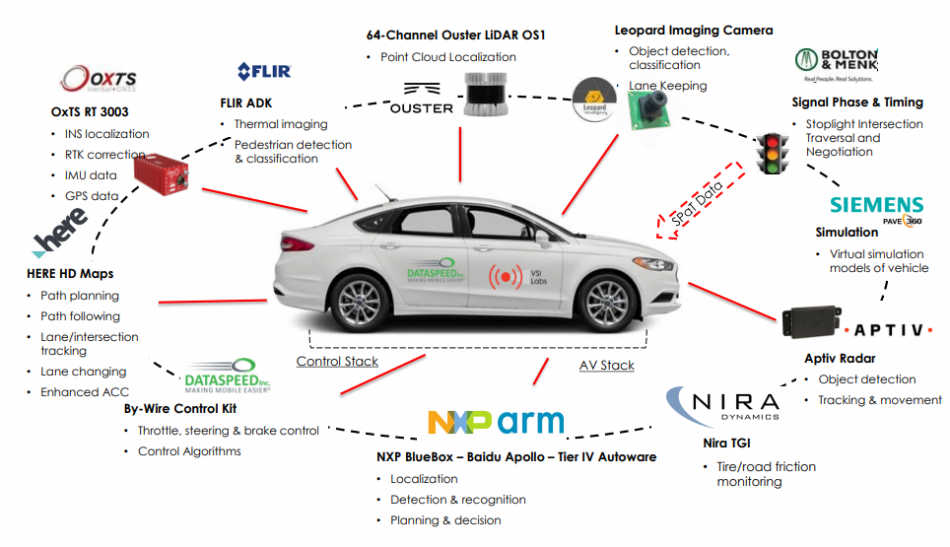 Then, there are those tests that are very hard to carry out in reality. “You don’t want to expose your staff to extremely hazardous conditions or the vehicle but we do need a way of looking at how these vehicles behave in extreme environments,” he adds.

This shows how digital twins look set to play a necessary role in the overall validation process, however, they also need to be validated themselves. While the concept is gaining ever more traction, there is understandable caution for potential adopters when it comes to moving historically physical – and often safety-critical – simulation into the virtual realm.

“We know we have to be able to simulate those 8B km. Then we know we have to capture all these corner cases – that can even be what happens if the car and the passengers are driving during an earthquake. But if you simulate it, how do you know you can trust the results of the simulation?” says David Fritz, senior director for autonomous and ADAS SoCs at Mentor, “The answer is you need to prove equivalence between the simulation, and what we call the physical platform. In this case, the simulation is provided by PAVE 360 and the physical platform is the VSI Labs cars. Together, we can run exactly the same sorts of scenarios and show equivalence. That’s also what this partnership is largely about.”

With that equivalence, the goal is to reduce the volume of road testing, dig deep into corner cases and enable informed choices over, say, those tests that should be duplicated in real and virtual environments. The aim is a virtuous circle.

Another part of the “equivalence” story is then that while digital twins are already being widely embraced by carmakers, their use is beginning reach further down among their suppliers.

As VSI’s own success shows, multiple modules from unfamiliar but potentially hugely valuable sources still need to be brought together – and these companies are well aware that to win over traditionally conservative OEMs, they will need to offer proof of their own validation processes.

“It has very quickly become clear to us that this really is an ecosystem play, which is not necessarily what we were expecting – that we would take this largely to the OEMS,” Fritz says. “We’re seeing most of the traction in those ecosystems where at the top, the OEM says, ‘Hey, we can’t keep doing things the same way.’ And that can go down into tier two, tier three, et cetera.”

Siemens and VSI had been running the partnership and getting results before it was officially unveiled a few weeks ago. There’s a lot of confidence on both sides that it represents an important way forward for automotive, and similar connections look likely as digital twins become pervasive across other industries. The real does not just provide fodder for these simulations; it’s a two-way street.