The digital twin has been with us as a concept for several decades. In a keynote at this month’s DVCon China, Stefan Jockusch, Vice President – Software at Siemens Digital Industries Software, described how much further his company is taking that idea in the age of the IoT, AI and 5G. He argued that this evolution will have an inevitable impact not only on the company’s operations, including its EDA business Mentor, but also on the wider worlds of design, test, verification and validation.

A digital twin was originally seen as, said Jockusch, “a complete representation of a product as it sits out in the field.” Figure 1 shows Siemens’ vision today now extends that simple virtualization to five interrelated areas. 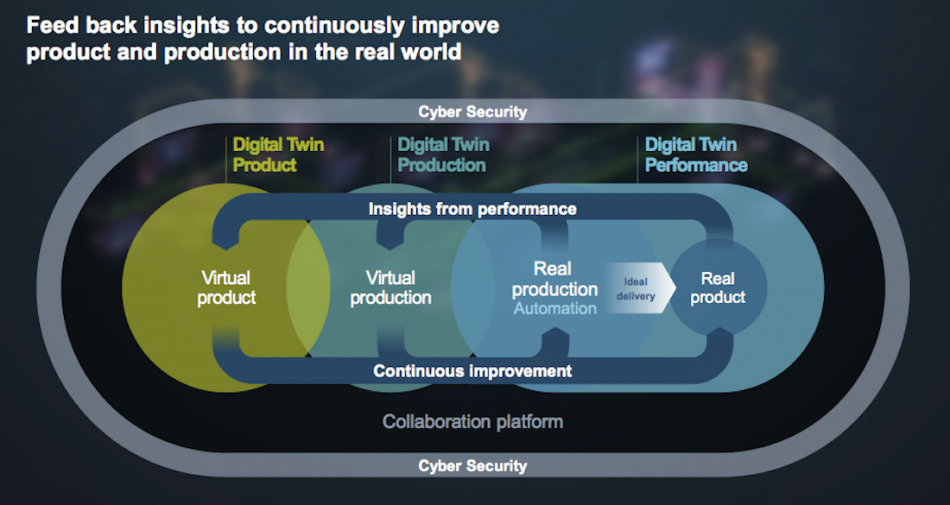 First, there is the digital twin of the product. This is a complete representation of the product in a virtual environment. It encompasses the shape, the mechanical elements, the components, the electronics and the software. “But,” said Jockusch, “it is also the ideas that are behind the product – the things it has to do as well as the decisions that are made when you come up with the product.”

Second, there is the digital twin of the production. This begins as a virtual form of the factory and the processes that it runs (or will run) to make the product, enabling production simulation at its most basic level. “When you want to make changes to a product, it is really important to understand how the manufacturing process works,” explained Jockusch. “What impact will the changes to the product have on the cost of the manufacturing, in time and other factors?”

Third, there is a hybrid level as the product goes into the real factory. Here, the virtual and physical versions of the process can interact in real-time for monitoring, and continuous improvement. There are now options to move between simulation and real implementation.

Fourth, there is the digital twin of the performance, as the product goes out into the field. “Nowadays, a product produces terabytes of data, and there is going to be 5G [to deliver it]. There is much of that data that we want to bring back because it can seed every step from development to manufacturing. This makes for a big change in how we can work and for productivity.

Fifth, there is the necessary wrapper of security protecting both the product and the process by which it is delivered and improved.

This series of interrated and intercommunicating loops forms very much a system-level view and the need to look to future design and manufacturing along these lines is widely acknowledged. Similarly, Siemens’ goal of a digital twin that delivers a “pre-silicon validation platform” represents part of the continuing ‘shift left’ in product design and delivery. But the implications are still working their way through the overall process.

“The whole idea of what we think of  as testing or verification is fundamentally going to change,” Jockusch said, “particularly as the IoT becomes an established part of the creative process.

“We’ve realized that we need to stop talking about CAD as one thing, CAE as another, PLM as another and EDA again as another. Rather, we need to think about what we call ‘transformational solutions’. Because if you look at the really big challenges manufacturers now have, they bring together something from everything.”

Taking the digital twin to the level of a specific product, Jockusch cited the example of an autonomous vehicle in terms of both its definition and continuous refinement (Figure 2): “It pulls every technology together.” 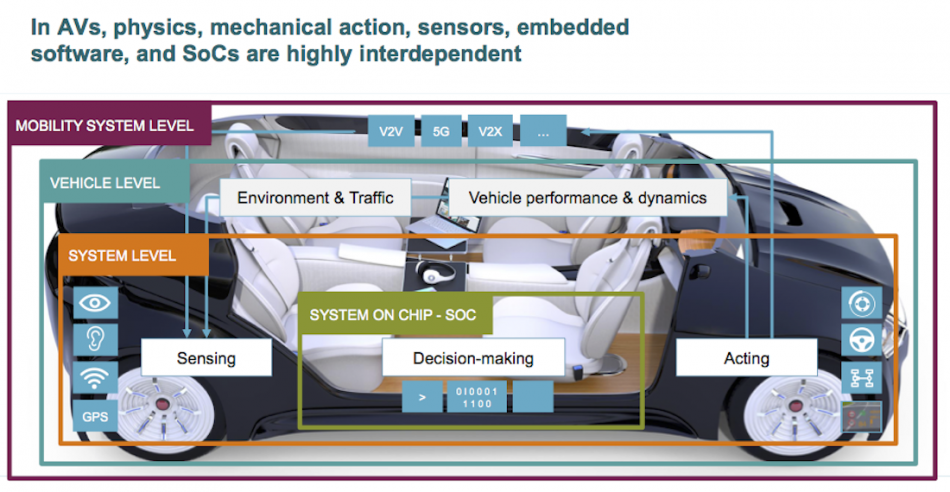 At the same time, electronics is becoming a much bigger part of the process – hence, Siemens decision to buy Mentor. That does not make it independent of the  PLM and manufacturing tools the conglomerate has traditionally provided. Rather, it puts electronics at the heart of the design, development, validation and verification processes.

“There is no way now to separate the worlds of the electronic and the mechanical,” said Jockusch. “But when you look at most of the killer products that we have seen in the last decade, they have been enabled by the evolution of semiconductor technology. Most obviously, the smartphone is everywhere today because improvements on the semiconductor side have enabled it to get to the cost and performance level we see today.

“And we have learned something else. If you look at the content by value of a project, the semiconductor part had been kind of stagnant at about 16%, but in the last few years we have seen that increase in every product we look at and in every area. System functionality and integration are playing a more dominant role, and moving more power into the chip and less complexity around it.”

The bottom line for all this, at least as far as Siemens is concerned, is bringing together all these ideas and trends to deliver a “boundary-free innovation platform”. It is a goal that is arguably as challenging as it is both necessary and inevitable. And, as the M&A in Figure 4 shows, an already extremely broad-based project. You suspect the company is not finished yet either.