Samsung Electronics’ foundry arm is rolling out an updated version of the Closed-Loop DFM system it first discussed last autumn. The system has been found to deliver  yield gains of 10% since implementation and is based on the Mentor Graphics Calibre physical verification/DFM and Tessent test/yield analysis platforms.

Samsung Foundry’s system uses Calibre’s pattern-matching capabilities to identify those patterns that have a consistently high record of reducing yield, and feeds that information forward to optimize manufacturing prep and test. It then uses the post-manufacturing results from Tessent and feeds those back to enhance PDKs and other DFM kits. 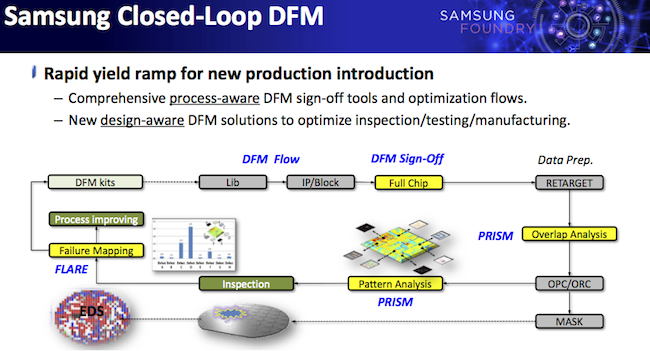 PRISM’s estimated contribution to yield improvement is approximately 8.5% and FLARE provides another 2%.

Wider access to the technique follows its successful use within Samsung, and it was first described in October 2015. It was originally proven at the 14nm node but has now been expanded to all nodes that Samsung Foundry offers, with immediate effect.

Samsung and Mentor will jointly host a luncheon presentation on the Closed-Loop DFM system at DAC 2016 on Monday, June 6 (for more details click here).

For Mentor, the Samsung collaboration represents the latest in an increasing number of instances of Calibre being applied beyond its linear design flow uses, here for data mining and process enhancement.

Other cases in what the EDA vendor considers to be an “explosion in physical verification applications” include those that address unusual shapes and curves. This, for example, is something becoming more common because of the need to incorporate sensor and MEMS structures in systems developed for the Internet of Things and automotive markets.

Another DAC event will address these burgeoning pattern matching tasks at 3pm on Tuesday, June 7 at Mentor’s own booth in the exhibition (#949).

Computex 2016: Microsoft makes play to be the VR OS
Schematic capture moves to the web with browser engine