Microsoft today (June 1) unveiled an OEM version of the Windows 10-based platform used in its HoloLens headset in a bid to become the OS of choice for virtual and augmented reality (VR and AR).

The company has signed up Intel, Qualcomm and AMD to help it develop products and applications for the Windows Holographic OEM platform, which runs on both the x86 and ARM architectures.

Also on board is HTC, whose Vive VR headset is currently earning rave reviews – but noticeable by its absence is Oculus, the Facebook-owned market leader in the nascent VR headset market.

Terry Myerson, executive vice president, Windows and Devices, would not be drawn on where Microsoft expects OEM players to first take Holographic. “You need to ask them,” he said.

The company is also keeping even relatively broad details of Holographic’s business model under wraps for now. However Myerson added that the company will widen access beyond an initial group of Tier Ones and talk more about the model at WinHEC developer events later this month in Taipei, Taiwan and Shanghai, China. 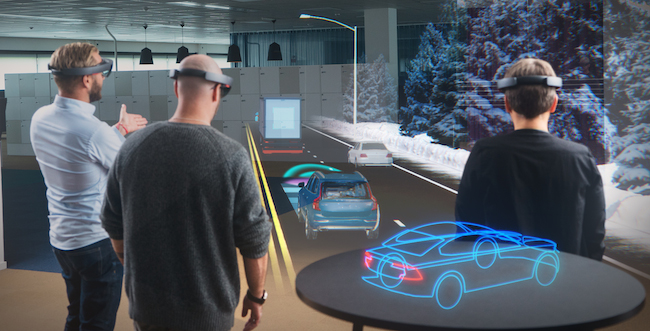 Microsoft has focused HoloLens on work with enterprise partners such as Volvo (Microsoft).

For the moment, the HoloLens is very much an enterprise market product. Individual headsets cost $3,000 (the HTC Vive is $800), and that is before users have installed highly specified PC hardware and the high bandwidth comms links needed to truly exploit VR.

However, Myerson did also suggest that Microsoft is looking to blaze a similar trail to that it marked out for 2-in-1 computers with the Surface. There, it has continued to offer a higher-end product itself while allowing OEM partners to find economies that have brought more affordable 2-in-1s to market. With the 2-in-1 sector now achieving 26% CAGR, Microsoft has reason for some faith in the strategy – though the non-gaming consumer market may still take another year or so to emerge.

Myerson expects some early OEM product proposals to emerge in “not weeks, but, yes, months.”

Microsoft on the button?

Microsoft is obviously hoping that it has got its timing right, and it might well have.

The company combines fully immersive VR and partially immersive AR in a single category it calls Mixed Reality. Its argument for the Holographic OEM move is that most systems have so far needed to be built literally from the ground up. As a result, there are often still incompatibilities across the different VR and AR technologies in their own discrete categories and between VR and AR technologies that could work together.

Microsoft argues that this is hampering growth, and it has a point. The issue is becoming a much broader concern.

Similarly, Microsoft is not necessarily seen as the ‘Great Satan’ when it comes to VR. First, it has largely confined itself to the enterprise market so far. Second, it is rather Oculus – with Facebook’s deep pockets – that is seen as the sector’s pushiest player (notably, it split with Valve Software, HTC’s partner on the Vive, over an original plan to converge their two technologies).