Foxconn, the world’s largest contract manufacturer and a key Apple partner, thinks the technology is not yet ready to underpin a mass market for wearable e-products.

The Taiwanese company, almost certain to take major production contracts on the newly launched Apple Watch, has identified the absence of at least one critical component: a WPU or ‘wearables processing unit’.

With its Hon Hai arm looking to develop Foxconn wearables/Internet of Things products – the company set up a wearables incubator last year – the often secretive technology giant offered an overview of necessary technologies during a presentation at Semicon Taiwan in Taipei.

Addressing the low power, communications and sensor requirements for both wearables and the Internet of Things, Jason Tsai, senior manager for Innovation in Digital Systems at Foxconn’s Hon Hai Precision Industries, said, “We strongly suggest that ARM develops something suitable for a wearable device. Even the Cortex M0 [ARM’s smallest processor] is not suitable as a WPU.”

He added that in the drive for greater interoperability of devices in a cloud-based environment will also need further integration of SoC and operating system development.

“The best company at that has been Apple,” said Tsai, although he also noted Google’s ongoing work with Android Wear. But Foxconn sees HTML5 as increasingly important “because one web page equals one app”.

“We believe HTML5 will be the choice for the next generation of operating system. It interlinks the cloud and ‘big data’ services,” he added.

HTML5 will have the additional benefit of providing a common standard around which new wearable and IoT products can cluster and communicate. Today, wearables tend to use a proprietary OS – apart from the iOS variant for the Apple Watch, Samsung has installed the Tizen OS and more recently Android Wear on the Gear product line.

Tsai made his comments to an audience that included senior executives from ARM and also Imagination, both of which are already battling for early-stage wearables design wins with their existing IP.

Tsai argued that the increasing fragmentation makes the case for further innovation at the lower end in terms of device capability, and also at the high-end as cloud-based analysis and processing drive computing toward true implementations of artificial intelligence.

Foxconn breaks down the infrastructure for the wearables/IoT market into an 11-3-2 matrix by screen size, network and cloud type. This in turn feeds into eight ‘lifestyle’ use types (see illustration). 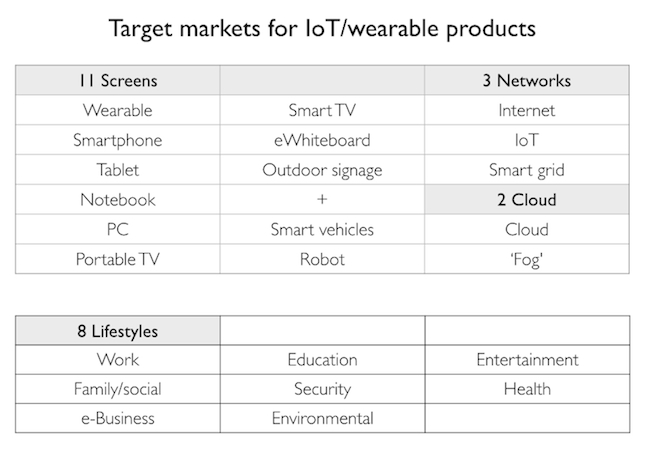 The 11-3-2 matrix for wearables and the Internet of Things, and target markets (Foxconn)

According to these markets and their demands, Foxconn has gone on to identify the IC requirements for projects that address the market’s low, middle and high ends.

Notwithstanding the need for the WPU, Tsai said that company can see applications at the low-end today for, say, the ARM Cortex M or silicon based on the 8051 architecture.

At the middle end, Cortex R or MIPS configurations can be used. But, at the high end, as ‘big data’ makes more demands, 64bit ARM v8 and general purpose GPU options come into their own.

But these essentially seed initial development and early adopter devices. More is needed.

Beyond further innovations in the CPU and OS, Foxconn’s other technology demands for wearable/IoT devices include more cost effective dynamic voltage scaling for power management and fingerprint sensors with 500dpi resolution.

As is generally acknowledged, cost will be the critical factor in realizing successful wearable/IoT products. Foxconn’s 11-3-2 matrix illustrates, however, that the market may tend more towards a plethora of vertical design requirements rather than the kind of flat horizontal ones that would more easily lend themselves to savings through mass production.

Its approach now is to take the same IE-ECRS business methodology it uses to achieve efficiencies in factories and apply it to the core of designs for wearables and the IoT. ECRS breaks down as:

“We have accumulated a great deal of experience of using this model in manufacturing and now intend to apply the same theory to the Internet of Things,” said Tsai.