Intel aims to use a dual-pronged strategy that takes advantage of internet of things (IoT) applications to push the x86 back into embedded-systems designs. The company aims to use its strength in servers to promote more efficient back-end processing and make it easier for small businesses and teams to develop custom hardware.

Talking about the Edison SoC that the company has now started shipping during his keynote at the Intel Developer Forum (IDF) in San Francisco, CEO Brian Krzanich said he sees the Maker Movement as being important for embedded-systems development. “Making has got into big companies,” he said.

The Edison, announced at CES at the start of the year, is aimed at that Maker community. Krzanich said the core Edison module is being combined with Arduino-like expansion boards to allow easy prototyping. “It has everything a person needs to build just about anything you can think of,” Krzanich claimed. As the SoC has a wireless interface, these could extend to wearables and IoT devices. 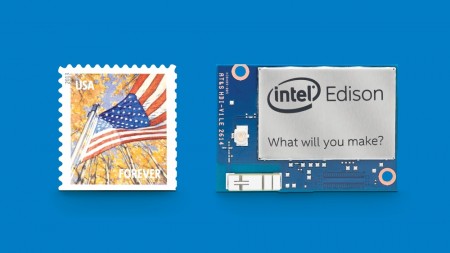 “I combine wearables and the IoT: they have a lot of the same needs and usages. You attach to a device lots of sensors and have a flow of information up to a hub where that data sits,” Krzanich said.

This flow of data provides the basis for the second leg of the Intel strategy, using data centers to help drive its ambitions to break back into the embedded-systems marketplace now dominated by processors based on the ARM architecture.

In her segment of the keynote, Diane Bryant, general manager of the data center group at Intel, said the need for cloud-computing support for wearables and the IoT was clear. “Behind every device there’s a data center. Today there are 1.9 billion smartphones, running on average 26 apps. Every day there are 20 data-center transactions per app, which adds up to 1 trillion data transactions each day. And those smartphone transactions will soon be surpassed by those from wearables. Data analytics is the next big disruptor.”

Bryant described software the company has developed to provide analytics for data coming from wearables called A-wear. “Our commitment is to provide technology optimized for cloud computing,” she said. “A-wear lets you create apps and analytics for wearables, using Cloudera’s implementation of Hadoop. We invite you to the program free of charge.”

Intel also hopes it can be behind the key standards for IoT communications, joining both the Open Interconnect Consortium for home applications and the Industrial Internet Consortium for real-time control systems.

Doug Fisher, general manager of software and services at Intel, said the OIC provides a way to “accelerate the adoption of devices. We felt the way to do that was in a pure, open way. We also believe it needs to be royalty free”.

Fisher explained: “We are providing code under an Apache 2.0 [open source] license and we are delivering and committing patents around mobility and authentication to ensure we can deliver on those commitments. Our focus is on delivering in an open and interoperable way.”

To try to improve its position in Android tablets as well as wearables and the IoT, Intel has committed to much faster turnaround on deploying support for new versions of Google’s environment for the x86. Fisher showed a reference platform for Android that is “about defining a platform that ensures quality, fast time-to-market solutions. We commit to delivering updates to Android within two weeks to make sure that it’s always fresh”.

Foxconn’s wishlist for wearables and the Internet of Things
TSMC: e-beam winning on cost over EUV for lithography