Mentor Graphics today (July 16) launched a development platform for heterogeneous multicore embedded software . It is the latest in a line of broad-based, near monolithic toolkits from the company that reflects a drive among major vendors toward addressing increasing complexity through more integrated flows.

Heterogeneous multicore architectures have been moving into the mainstream, combining both MPU and MCU content in hardware families such as the latest generation of OMAP SoCs from Texas Instruments. This trend has raised several issues for software development teams that Mentor’s release seeks to address.

Mentor’s pitch is that by building on its existing tool range, it can now go further to meet the challenges than rivals. In this context, specific areas addressed by the new platform include:

The heterogeneous multicore development solution brings together existing capabilities within tools such as Mentor’s Embedded Linux, Sourcery and Embedded Hypervisor, extends them and also provides integration suites such as the company’s Volcano software for automotive. 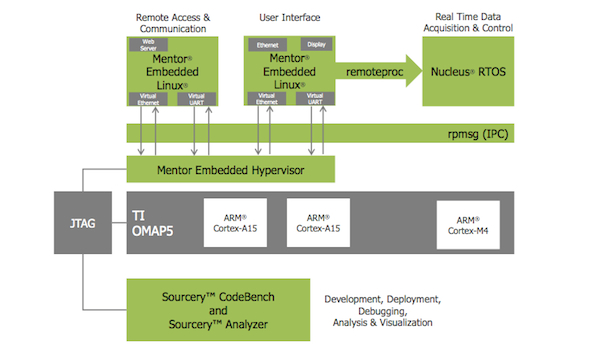 Mentor is to hold a webinar going into greater technical depth on the new platform on August 5 at 9am PDT (registration details here) and has also posted a YouTube video looking at the challenges presented by heterogenous asymmetric development for a medical device. Availability on the platform is immediate.

This heterogenous multicore embedded initiative is the third broad platform launched by Mentor in recent months. It follows on from similiar initiatives in verification for chips and PCB.