Wally Rhines, CEO and chairman of Mentor Graphics, told an audience at this year’s Design Automation Conference that the EDA industry needed to find new markets if it was going to keep growing its revenues.

“Every time we get a new methodology we get a bump in revenue which then flattens out,” he said. “If we are going to grow our industry will have to tackle new methodologies, as we did with DFM, ESL, FPGA and so on.”

Rhines said that between 2004 and 2014, 100% of the growth in tools revenue came from the introduction of new methodologies such as formal verification and power analysis. Current challenges that could yield similar opportunities include tackling electromigration, handling restricted design rules, and extending the scope of formal and related verification techniques.

“All the tools to handle these issues will have to come out of the 2% of the semiconductor industry’s revenue [which usually goes to the EDA industry],” he said, “or we can find new budgets, for example as we have been doing with design for manufacturing and emulation.”

Rhines argued that the emulation market, whose revenues had been flat for the ten years preceding 2011, suddenly doubled in 2012 because emulation sales started drawing on software development budgets. 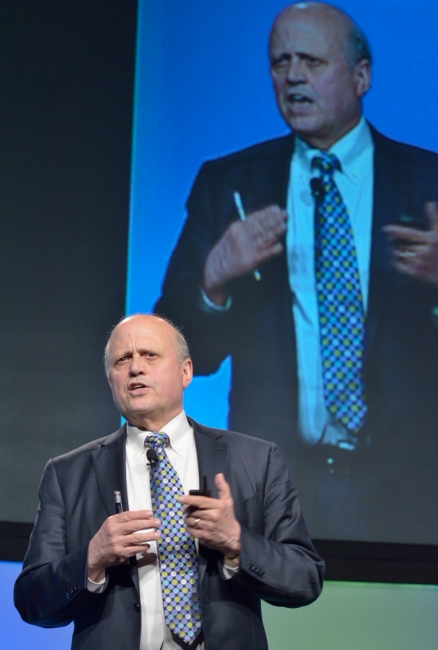 “Embedded software is now verified when deeply embedded and application software will go the same way, and therefore we can access new budgets,” he said. “The same is true in automotive and aerospace design, which is automated to the same point as electronics design was in the 1970s and which would swallow the EDA budget without noticing.”

In hardware cyber-security, Rhines said, “This is one for which governments would pay billions of dollars to know the hardware does what it’s supposed to.”

3D and EDA need to make up for Moore’s Law, says Qualcomm
Cliff Hou, TSMC VP R&D, on the route to 10nm – and beyond