Panasonic and the National Institute of Advanced Industrial Science and Technology in Japan have turned a resistive memory (RRAM) into a hydrogen sensor that they claim works at much lower energy than existing designs.

Describing the development at this week’s VLSI Symposia (20th June, 2018), Zhiqiang Wei, chief engineer at Panasonic, said the main motivation for developing a hydrogen sensor was in anticipation of a shift towards the use of cars powered by fuel cells. As a colorless, odorless gas, users will need sensors to determine if it is leaking into the atmosphere.

The existing tin-oxide sensor technology relies on the use of a heater to support chemical reactions between the hydrogen gas and oxygen ions adsorbed onto its surface. Such sensors also suffer from poor sensitivity as the surface ions react with other gases and they can be permanently poisoned by some organic reagents. 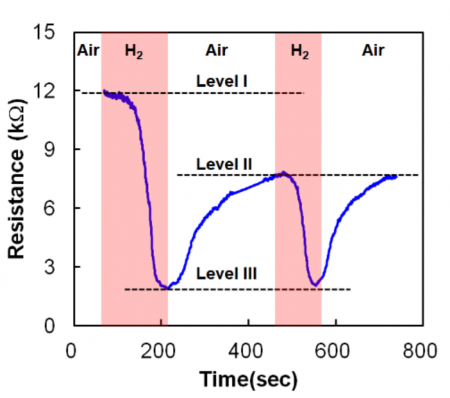 The Panasonic team decided the presence of oxygen ions and vacancies in a number of resistive memory materials could provide the basis for a more reliable and energy-efficient sensor. The idea that an RRAM can be turned into a gas sensor is not unexpected as the switching mechanism is largely based on reversible chemical reactions.

In 2014, researchers from National Sun Yat-sen University in Taiwan reported making a carbon-based RRAM that exhibited changes in resistance in the presence of hydrogen and oxygen – apparently the result of reversible chemical reactions with the carbon atoms in the lattice, assisted by a platinum layer on top.

In that structure, the reaction with hydrogen is not dissimilar to that used in the production of margarine, which is helped by a platinum catalyst. In the process of setting the memory, hydrogen ions are attracted from the core of the memory cell to the platinum electrode which leads to carbon-carbon double bonds being formed. These bonds, which are present in materials such as graphene, conduct electricity more easily. When reversed, the hydrogen ions are pulled back, which converts the carbon-carbon bonds to the more resistive single form. Conversely, a reaction with oxygen occurs towards the lower surface, where ions are pulled from and returned to a hafnium dioxide layer.

The RRAM developed by Panasonic and AIST employs a cell based on an oxide of tantalum (Ta2O5), fabricated on a 180nm CMOS platform. As with the carbon device, the Panasonic engineers switched the normal top electrode for one made from platinum to catalyze the formation of oxygen-hydrogen bonds. “We don’t have a heater, which is why we can make this device work at very low power,” Wei said.

The introduction of hydrogen to a device in its high resistance state helps form conductive filaments that lower the resistance of the memory cell. Wei said oxygen-hydrogen complexes form in the cell around oxygen vacancies. Tests showed that on inital exposure some hydrogen remains in the cell, though much of it is flushed out once the external hydrogen concentration drops. For production it means that the sensor first needs to be primed with hydrogen before it provides repeatable measurements.

Wei said the RRAM sensor shows high selectivity, responding to hydrogen but not other common gases such as carbon dioxide and methane. With a response time of around 20 seconds for 1 per cent hydrogen concentration, the time to detection falls as the concentration of hydrogen increases. The response time is a little better than that of a conventional sensor though slower than a FET-based sensor described at the 2017 symposium by Hitachi engineers. Power consumption for the Panasonic/AIST RRAM sensor is 0.35mW.