Synopsys plans to enter new markets through its acquisition of software quality testing company Coverity, which was finalized earlier this week.

Aart de Geus, chairman and co-CEO of Synopsys, told this week’s SNUG user group meeting in Santa Clara that in a world in which IC designs are becoming more complex, and being integrated into increasingly complex systems, the ability to check both hardware and software is increasingly important.

“There’s a push down to more silicon, and up to more complex systems,” he said. “In this context, the push up is taking the majority of work time.”

He estimated that more than half of the engineers employed at semiconductor companies work on software.

“Software is increasingly on the critical path of projects,” he added. “The Coverity acquisition gives us code and test analysis, metrics measurement, workflow and collaboration tools.”

Entering the software testing business could also help Synopsys grow more quickly than the semiconductor industry that it serves.

“For the EDA industry to grow it has to take on more tasks,” said de Geus. “And there’s just a natural adjacency with software. The point at which EDA stops and software verification starts is immaterial.”

John Chilton, who has been drafted from Synopsys into the role of vice president and general manager of Coverity, argued that many companies today are now essentially reliant on their software infrastructure. 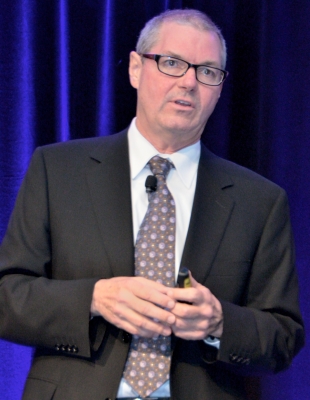 With the cost of software defects rising and code becoming more complex “it’s time to put some real engineering power behind [testing it].

“One of the good things with Coverity is that we are just at the beginning of applying the intelligent things we can do check the code,” he said. “It feels a bit like being where synthesis was 25 years ago.

“Lots of Synopsys customers aren’t using Coverity and should,” he added, arguing that the tools would also be useful for customers who want to offer more complete reference designs.

“We also understand how to move from point tools to technology platforms,” he added.

He argued that the Coverity acquisition would bring Synopsys recognition in markets that it doesn’t yet serve, as well as a new sales model to study.

“It gives Synopsys the ability to help existing customers and new customers too, with money coming from a new pot,” Shilton added.

“It would be nice to get some new friends.”

Automated driving: have you got 1000 centuries to spare?
MIPS-based board for Google wearables launched by Chinese chip company