Time was when a call from Rambus would have made most of its memory rivals antsy – was one of the company’s frequent patent infringement claims about to arrive? Today, there’s a new – ahem – sheriff in town – Dr Ron Black came in as CEO in mid-2012 – and the company is looking for technology partnerships.

Speaking at last week’s GSA Memory+ Conference in Taipei, Taiwan, Dr Black said, “I would like to work with all of you. The industry structure is now rationalized and our customers want this.”

More specifically he had this message: “We have to be willing to go upstream to the architectural level.”

What Black means by that is that for DRAM in particular but also in areas like server architectures, the power and scaling challenges require some broader thinking. Once upon a time, he explained, Rambus engineers concentrated on working at the bit cell. “Now, we increasingly we have system architects, in hardware and software, rethinking the fundamental architecture. That’s where the answers are.”

Let’s recap the problem here first, because Black brought some useful data to explain the challenges.

Scaling is perhaps the easiest to describe, if not to address. The core of the problem can be boiled down to three factors:

Now for power, some charts. The first, from analyst IDC, shows Worldwide Spending on Servers Power, Cooling, and Management/Administration. Power is taking a big chunk of that. 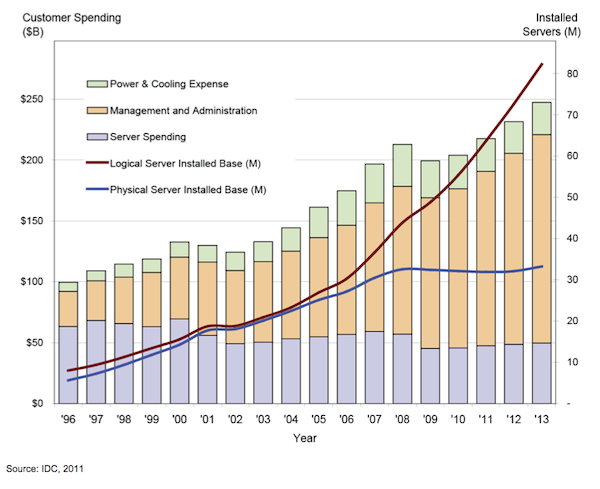 The second chart is from Google, a company that knows a little about servers, and shows peak power consumption by area. Significantly, this is for 2007. 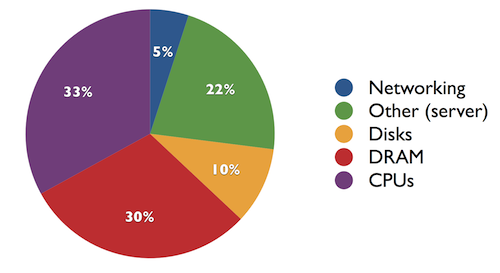 The third is from IBM at this year’s Flash Memory Summit, and it shows that against 2007’s 30% share of peak power for DRAM, it may now be significantly higher again – perhaps 40% – as memory takes up yet more of the server power load (as a side point, it’s also interesting to look at this chart in terms of ARM’s ambitions in servers). 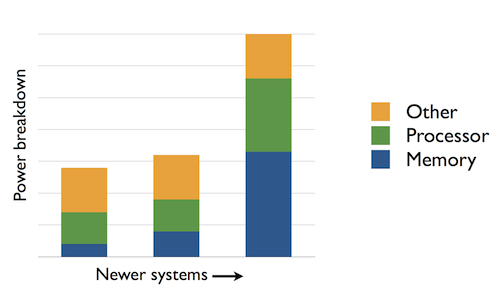 Rambus thinking on scaling and power

On scaling, Black offered a provocative idea. “On DRAM, it has to be perfect. But maybe we now have to do the same as other markets, and think about how we can use die that are not perfect.”

One idea Rambus is following here involves the use of ‘intelligent’ DIMMs that can anticipate when problems might arise. This raises the idea of buffer chips that manage reliability, so that the DRAMs themselves do not need to be perfect.

“We have to manage things better,” Black said.

Beyond that, Rambus is working with customers on how server racks are constructed to optimize for power and performance. One idea here already being explored more widely is to separate the memory from the processor, so that each exist in individual ‘blades’.

“But in terms of the thinking, it’s like the bit-cell guy goes to the left and the system architect goes to the right. We’re trying to get these guys to agree,” said Black.

For power, Black noted that the standby state is the big problem.

“In a typical server, you have 25% active memory power versus 75% idle memory power. And the refresh current is one-third of that idle current,” he said. “The architecture can use standby modes but the problem then is latency is so great that most of the time people don’t use them.

“What we need is cool technology – and we’re seeing things where you if you can turn on and off in less than 10ns, you don’t have the latency problem.”

In all these cases, Rambus is certainly talking its own book. These ideas have been informing  its R+ Enhanced Standard Memory and Interface family, since its launch in January. For example, its Instant On technology currently claims to overcome the latency issue with 8ns switching between 3-6GBps@2mW/Gb from 0mW.

But this was nevertheless a useful view of the way forward in a broader sense. Certainly, Rambus is tracking new memory technologies such as phase change, ReRAM and spin-torque-transfer MRAM. It has made investments in them. “But we all know how long new technologies can take to bring on,” Black said.

In closing, Black did offer a few thoughts on the Internet of Things, a market he knows well from his time at MobiWire and Wavecom, before joining Rambus.

“The Internet of Things is next. But while it’s a great industry, it’s really hard. And I say that having come to Rambus from running a French Internet of Things company,” he said. “It’s very fragmented and in terms of requirements, it’s not clear what the customers want. I mean, do I really care if my fridge is connected.

“Still whatever happens, it’s going to be good for us.”