An ASIC-based design has allowed Tektronix to build a novel oscilloscope that can mix and match analog and digital channels and trade off the resolution of analog captures against sample rates.

Chris Godfrey, market development manager at Tektronix, said of the 5-Series mixed-signal oscilloscope: “It has been one of the largest development efforts we’ve had in the company.”

The Tektronix-designed ASIC inside the 5 Series makes it possible to have up to 8 analog channels or 64 digital inputs or a mixture in-between based on the type of probe attached to the input.

“The ASIC makes it possible to combine the ADC, multiplexers and trigger circuitry all in a single device,” Godfrey said. 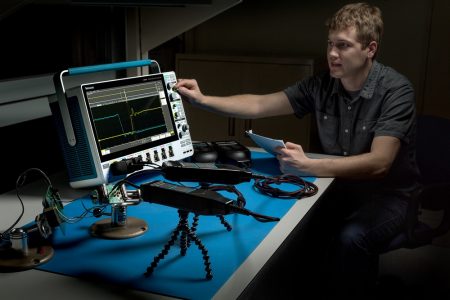 The company makes a version with four analog channels, similar to previous mixed-signal oscilloscope. But Godfrey said a key design point was to increase the number of inputs to reflect the way in which this type of oscilloscope is used.

“People often need more than four channels. Many of them have been trying to use two scopes together,” Godfrey said. “But that leads to issues of synchronizing the data and whether you are getting the same results from the two devices.”

The analog channels capture at up to 12bit resolution with the ability to extend that to 16bit for slow-moving signals through the use of sigma-delta decimation techniques. “There is a unique DSP filter applied at each sample rate,” Godfrey said.

The company has embraced the use of touchscreens in the comparatively flat design, with pinch and zoom gestures used to home in on signals and onscreen buttons for controls. “You don’t have to keep drilling down into menus,” Godfrey said.

Because oscilloscopes are now often used as portable computers in between measurements, Tektronix has made it possible to run either Windows or Linux as its host operating system. Godfrey said users in the military sector now tend to prefer Linux because of the control it offers them over the software platform.