A variety of organizations used Embedded World to introduce kits to attract a broader base of developers to create Internet of Things (IoT) applications.

Working with Italian design companies Metodo2 and Cipierre Elettronica, Arrow Electronics put a range of environmental sensors and communications interfaces onto its SmartEverything board. Using a Cortex-M4 based MCU from Freescale Semiconductor, ARM’s own offering looks further afield with links to the IBM IoT middleware. ((AMD))

Using the Arduino form factor,Arrow’s SmartEverything uses a Telot SIGFOX module for connections to the Ultra Narrow Band wireless infrastructure as well as positioning using GPS with an embedded antenna for. It also runs Telit’s M2M device management software to help connect devices to the network. The board has a TDK Bluetooth Low Energy interface for short-range connectivity that allows setting and control from a smartphone as well as an NXP NFC tag. 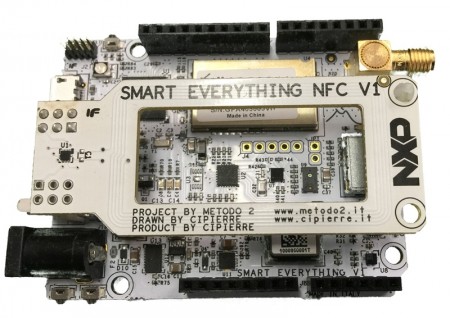 The host processor is a Cortex-M0+ device from Atmel that interfaces to a series of sensors from STMicroelectronics to detect proximity, humidity, temperature, and acceleration. The MCU runs authentication software using SHA-256 hash algorithms and the message authentication code (MAC). The board will start shipping in the second quarter.

Following on from a student-oriented design launched a month ago, ARM has produced a higher-performed IoT Starter Kit that features a Cortex-M4 Microcontroller from Freescale, Ethernet interface and software to talk to IBM’s Bluemix cloud-based services for data analytics and other applications resources.

Krisztian Flautner, general manager for IoT business at ARM, said: “Smart cities, businesses and homes capable of sharing rich information about their surroundings will be critical in unlocking the potential of IoT. The ARM IoT Starter Kit will accelerate the availability of connected devices by making product and service prototyping faster and easier.”

Future versions of the kit will run the new ARM mbed OS and use the mbed Device Server software to deliver a wider range of efficient security, communication and device management features. ARM and IBM will continue to work together on interoperable, open, secure and scalable connectivity between devices and the cloud.

Prototypes have been given to a few early adopters including the Science and Technology Facilities Council (STFC). STFC is engaged in broad research in areas such as space science, the environment, medicine, and computing. The team is using several kits to create a big-data demonstrator project.

Design house Cambridge Consultants is working on projects with a range of companies using the kit.

Tim Murdoch, director of digital services at Cambridge Consultants, said: “Coupled with the link into IBM’s cloud platform we now have a fast route for makers to take any product to market and develop services around it quicker and more cost-effectively than ever before.”

Although ARM is starting with Ethernet, the processor designer is looking at the potential for versions that offer cellular, WiFi and Thread wireless interfaces.

At the higher end, AMD-sponsored open-source hardware group Gizmosphere said the Gizmo 2, board based on a 64bit x86 processor, is now shipping. The kit includes the Coreboot-based SageBIOS from Sage Electronics Engineering and a Linux distribution from Timesys.