The emulator has become the cornerstone of embedded system level (ESL) design on SoC projects, analyst Gary Smith claimed in his annual presentation ahead of the 51st Design Automation Conference (DAC) in San Francisco. And the technology is finding ways to make the high cost more palatable.

“We now have an ESL flow,” said Smith. “And the emulator is the heart of the ESL flow. The flow isn’t perfect but it works.”

Smith explained: “There are two problems with the flow. Number one, once the architect hands off the design, they lose control of the design. That’s because there are no standards for behavioral System C or whatever language it is. The hardware guys with the emulation boxes can pass the models back and forth but they can’t pass it back up. They don’t have a path to the architect.

“The other thing that comes up is that these boxes are expensive. How do you fold that into your budget?” Smith asked.

The rise in the use of emulation since the start of the decade led to a jump in the average cost of design as reflected in the ITRS projections to which Smith contributes. But over time the capital cost of the emulator is being absorbed thanks to changes in how they are used. 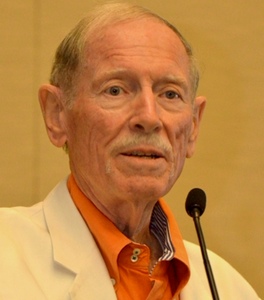 “The cost chart is not in that bad a shape. Most designs are under the $50m area,” said Smith. “Many companies are able to do that. There was a jump in 2011. Emulation was a good part of that. But since then it has held stable. Because the emulation guys are not asleep. They are taking a good look at the cost of emulation.

“By next year, emulation will not have a big impact on the cost of design. The power users buy emulation for communications. They want to be able to communicate models through the ESL flow. But once you have a box though you find out that it’s a pretty good bug hunter. It’s good in verification and good for post-silicon stuff. Because of the spread in usage, the cost to the project is going down significantly.”

Another source of money for emulation that emerged during a panel session at the recent EDPS conference in Monterey, California is from improved design quality. “Basically it’s the budget that’s been targeted for respins. The respin doesn’t happen. It’s pretty easy to say ‘We’ve just saved $30m for you, can we have $5m for this. That means the pie is growing.”

Richard Goering, blogging at Cadence, covers some other aspects of Smith’s talk, including the cost-saving role of IP in SoC designs.

Innovation is extending the technique's power across areas such as context-aware layout, accounting for multi-patterning and implementing fill.