The launch of a data recorder and oscilloscope by Japanese power-electronics test specialist indicates how intertwined the disciplines of mechanical and electronic engineering are combining. Though the latest iteration of the company’s ScopeCorders has extended resolution, frequency and recording capacity as might be expected, the product’s design underlines the increasing importance of synchronization with other instruments, which could be geographically far apart, and the ability to capture real-world behavior.

The DL950 ScopeCorder samples at up to 200Msample/s, capturing up to 8 billion data points and is aimed at designers working in electric vehicles, renewables, and robotics where there is a need to record control signals and other signals over periods of minutes or hours in the field. Each instrument has eight slots designed to hold different types of capture module to handle inputs from sensors such as accelerometers as well more conventional electronic sources. 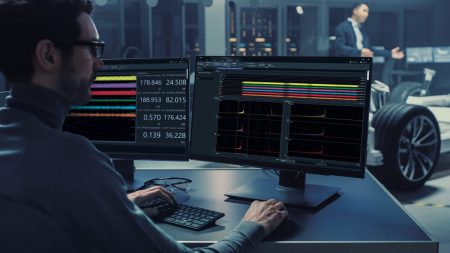 The instrument has both a custom optical interface that can be used to connect to four other DL950s over multimode fibre cables up to 20m in length as well as an Ethernet port that supports the IEEE1588 time-synchronization protocol. The latter makes it possible to synchronize measurements to a resolution of a microsecond with other types of instrument, including the company’s own existing WT5000 power analyzer. In principle, the support for IEEE1588 makes it easier to take measurements from instruments that are separated over reasonably long distances, which could easily be the case in situations such as renewables installations.

Though the White Rabbit variant of IEEE1588 developed by CERN has been used by National Instruments in its PXI equipment, Yokogawa opted for the standard version on the basis that it offers sufficient resolution for typical industrial applications.

The IS8000 analysis software for the instruments adds another link to real-world analysis with the ability to synchronize images captured by high frame-rate cameras, which the company expects to be useful in robotics development to show how changes in control algorithms affect the responsiveness of the machine’s limbs.