Research by Professor John Rogers’ group at the University of Illinois is leading to biodegradable electronics, sparked partly by needs for systems that fall apart gradually after being discarded and for medical sensors that do not have to be removed surgically after use. And they are still based on silicon rather than more exotic materials.

Speaking during the final keynote at the 2015 Design Automation Conference in San Francisco, Rogers said: “Most folks think of silicon as a rock. That’s not true. It turns out that silicon is water-soluble. No-one stumbled on this before because the dissolution rates are incredibly slow. But if you immerse it into saline at body temperature, you can watch it slowly dissolve.”

A thin silicon chip will dissolve in about two weeks, Rogers said. “When we stumbled across that we were very excited. If you can use silicon in these types of systems there is a lot we can do. You can use silicon dioxide, magnesium, magnesium dioxide, and silk to begin to build real bits of electronics.”

The team has managed to make circuits such as a Colpitts oscillator, Rogers said, “that behaves as you expect it would. But the whole thing dissolves when you put it in water”. 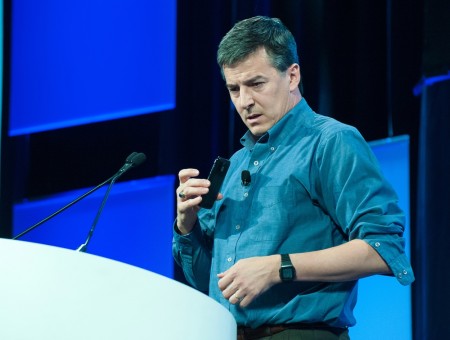 Initial funding came from DARPA. “If you drop sensitive electronics in the field, just wait for it to rain. The silk dissolves almost immediately. Magnesium in a few hours. And silicon in a few weeks.”

Defense applications include devices that will be destroyed by the elements went lost or sensors that act only temporarily before disappearing. Outside defense, Rogers said he sees implantable technologies as being important. “One idea was brought to us by experts at the University of Washington working on brain injury.”

Brain swelling is a major cause of death and further injury so doctors want to be able to monitor pressure within the cranium after damage. Rogers said: “They are wired, which restricts movement and they need external interface that create a risk of infection. And they require second surgery to remove them.

“The vision is if you can replace this hardware,” said Rogers, pointing to bedside monitors and wires linking to the patient, “with wireless interfaces. And do a fully sutured implantation.”

The researchers have begun trials on rodents using a pressure sensors made from absorbable materials and capped with the FDA-approved polymer PLGA. “We mount a serpentine strain sensor that’s as long as the tip of a pencil,” Rogers claimed, saying a combined temperature and pressure sensor is possible.

The current design is not yet fully wireless. Very thin molybdenum wires link to a module on the outside of the head that contains a wireless transceiver.

“The platform is absorbable on the timescale of a week,” Rogers said, which is roughly the critical time for brain trauma.

Wireless design is a fundamental part for the flexible skin-worn electronics that Rogers’ group has also developed. Talking about existing wearables designs such as heartrate monitors, he said: “You are confronted by the problem that the electronics are completely mismatched with the body. You have something that looks and feels like a hockey puck strapped to your chest. Fitness buffs will accommodate that but not most people.

“[Starting in 2007] we looked at what would be the ideal form for electronics that integrates with the skin. We decided that the kid’s temporary tattoo was a good model. It goes on, looks great, then you forget that it’s there.

“If you wanted to build a circuit with these characteristics, what would it have? It would need to be superthin, ultralight in weight and as low in [Young’s] modulus as you can go, around ~5kPa. And it needs to be able to bend and stretch, because skin stretches up to 30 per cent. It would also have to accommodate transdermal water loss.”

As with the soluble electronics, Rogers’ preferred platform is silicon, thinned down to the levels used in power-electronics devices to minimise their on-resistance. The resulting wafers are highly flexible.

For skin-worn devices, the Illinois team has developed nanoribbon shapes to bend around the bdoy. “But you need a system that doesn’t just bend but stretches. Silicon won’t stretch no matter how thin you make it. But if you take silicon and bind it to a rubber support then it can stretch, just like an accordion. Instead of exploiting out of plane buckling you can do in-plane buckling by structuring them as serpentine elements.”

“They have stress and strain responses that are pretty well matched to skin. Because it’s so soft and thin, van der Waals interactions keep it in place. The user barely feels it. It doesn’t even support its own weight. it’s just like a piece of biological tissue, which raises the issue of how you put them on and take them off.

“We took another idea from temporary tattoos,” said Rogers, of using transfer sheets. A PVA coating used to help put the sensor in place gradually dissolves. the sensor itself can be peeled away a little like shedding skin. “It’s slightly disgusting in its appearance as it peels away.”

Rogers said the sensors can be used for ECG, EEG and temperature measurements. “It turns out there are precision temperature measurements that can tell you a lot,” he said. “As an individual heats up, they can develop tremendous spatial heterogeneity in temperature profiles. You can determine a lot about cardiovascular health that way. You don’t want to perturb natural temperature of the skin, but you can do that with these very thin devices.

“But there is the question of how do you do a full wireless device. A changing geometric configuration is an issue for RF. It becomes a multiphysics challenge. We have designed coils to maintain a consistent centre frequency [as they deform]. You can do this if you are careful. We’ve found it can operate even under extreme levels of deformation. You can literally squeeze data out of these devices,” Rogers quipped.

Because powering such thin devices is problematic, the research has focused on using the energy-harvesting techniques developed for NFC. He demonstrated reading one device stuck to his arm using a mobile phone during the keynote.