Google has moved to on-body tests of the the smart-lens platform it has been developing for the past few years while the team continues to experiment with embedded LEDs that react to blinks to help warn diabetes sufferers of sudden changes in glucose levels.

Having built custom analytical equipment to test the sensor electronics with different levels of glucose in a medium that simulates human tear fluid, Google X project leader Brian Otis said in his keynote at DAC 2015 in San Francisco: “We are now looking at on-body performance. There is a whole additional layer of complexity when you look at the clinical challenges. The human body is so messy and so variable. There is huge variation from person to person and even for the same person: it depends on how much sleep they have had and their levels of stress.

“There are some surprising things, such as effects on RF and magnetics performance. People have different eye shapes that we have to cope with. You have a surprisingly large degree of freedom with your eye movements,” Otis added, noting that the antenna and RF interface needs to be able to deal with those changes for reliable reception using the very low-power transmission techniques that are needed for in-eye systems. 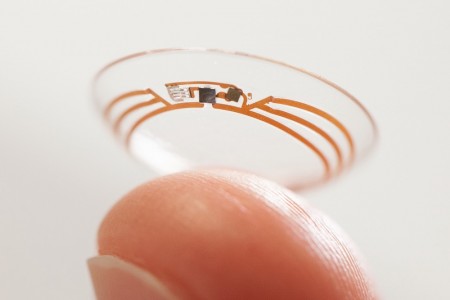 Otis described the custom design and manufacturability work that Google X had to perform to put an electrochemical sensor, controller, memory, power source and RF interface into a soft contact lens. Using a combination of thinned silicon die and design control to bring the chip dimensions to 700µm on a side, the current design is no wider than the ring used for the RF antenna.

The team opted for NFC-based communications as it allowed the lens to transmit data without requiring a power-hungry frequency reference as well as using the RF energy provided by the reader.

Rather than use an optical glucose sensor, Google X chose an electrochemical design based on two platinum electrodes that converts some of the glucose to hydrogen peroxide and then senses that electrically.

For future prototypes, Google is experimenting with ideas of how just a few LEDs embedded in a ring together with the sensor and control electronics could provide information by tracking blinks and eye movements.

“We need to provide alerts to the person. Using a microscale user interface embedded in the lens is one approach. We’ve been working on integrating tiny LEDs into the contact lens. Fortunately, you don’t need a lot of light as they are so close to the eye. But focusing on the corner of the cornea is difficult.

“But we only need to provide a handful of LEDs: it doesn’t have to present a discernable image. The person can be altered to changes through a series of blinks. Even with a few LEDs there are various patterns we can impart information on rates of change in glucose that are as useful as raw threshold values,” Otis said.

Last summer, Google agreed to license its smart-lens developments to Novartis’ eye-care division Alcon and is working with the pharmaceutical company on manufacturability at low cost – investigating roll-to-roll processes – as well as continuing on the path towards full clinical trials.

Although work is more advanced on glucose monitoring, Otis said the team is looking at the potential for lenses that use electronic control and actuation to correct for the presbyopia suffered by older adults. Google X is not alone in this work, both on diabetes monitoring and presbyopia correction. Research institute IMEC in Belgium has developed a number of building blocks for smart lenses as well as an early prototype of active optics, said Chris van Hoof, director of wearable healthcare at IMEC.

“Over the age of 45 most people people stop using contacts. It stops because they need multifocal lenses and the existing designs not very comfortable] So they switch to multifocal glasses. It would be great if you could create active multifocal lenses.

“But the challenges are huge. You have very little space, you need electro-optics, you need a sensor for autofocus, you need a battery, and a way of charging it as it will be a one-month contact lens. And it needs to be breathable,” van Hoof.

Van Hoof said the current protoype needs “an ugly flat cable” to attach the active optics to the extrernal electronics controllers. “You want the electronics in the contact lens not hanging somewhere. That’s where there is still a big technological and design challenge.”

One Response to Smart lenses getting closer to live use