Nokia Siemens Networks has built an instrument able to handle bandwidths up 1GHz that the R&D team is using to explore the possibility of using milllimeter-band radio for 5G communications.

Based on a National Instruments PXI chassis, the system is designed to analyze signals up to 100GHz using a combination of FPGA-based processing FlexRIO cards and specialized front-end capture cards.

“With 5G technology our vision is that it should provide a thousand times improvement in capacity, with a peak rate of more than 10Gb/s and a latency of less than 1ms,” said Amitava Ghosh, head of NAM radio systems research at Nokia, during a keynote session at NI Week. “There are new spectrum opportunities for 5G using millimeter waves. To test that we need a proof of concept design that works from 6GHz to 100GHz, mainly in the 70GHz to 80GHz range. There are large spectrum opportunities there But designing a proof of concept system for this presents a lot of challenges.” 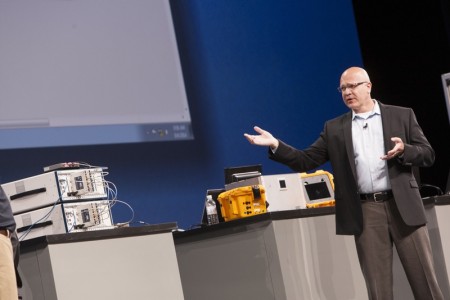 Mark Cudak, principal research specialist at Nokia, added: “One big challenge was finding a system that could process 1GHz in real time. We also had to build an access point for it with a transceiver and everything in between. We were able to use PXI for the baseband processing hardware of a 1GHz TDD access point. FlexRIOs provide real-time processing for modulation, demodulation and channel coding.”

Ghosh told Tech Design Forum the system is being used to investigate MIMO techniques into the millimeter spectrum, using smaller arrays at higher frequencies where it is possible to have much wider channels.

“At 100GHz or 70GHz, we are really using large bandwidths to get the large data rates with less of a focus on multiple streams. We may use just two streams at 70GHz. We can get 10Gb/s using 16QAM modulation and 2×2 MIMO,” Ghosh explained. “At lower frequencies, we would tend to use more streams.”

James Kimery, director of 5G product marketing at NI, said the shift to millimeter-wave R&D greatly increases the data throughput. “With existing cellular networks, the biggest chunk is 20MHz or so. This prototype is two orders of magnitude quicker and so the processing requirements for that spectrum are more stringent. It’s about creating a system that can sustain those rates.

“What was really impressive about that was that the systems was all prototyped in LabView. Typical prototypes before these types of systems would use a mixture of C code, Verilog or VHDL and other languages. You would have at least four or five different tools to create a 5G prototype,” Kimery added. “There are ten FPGAs in the prototype, all programmed using LabView. Amitava told us it saved him one calendar year – so it took half as long as they expected to build the system. And it probably used a lot fewer resources as well. It’s probably the first prototype of its kind to use just one tool.”