Synopsys has published a white paper that explores the energy-efficient implementation of machine-learning (ML) strategies on embedded processors in IoT applications. The paper starts with the basics of ML and progresses through the common characteristics of various popular algorithms, the kinds of computation they need, how that computation can be efficiently implemented in optimised processor architectures, and how software libraries can help ensure that the hardware is used most effectively. The paper ends with a worked example of implementing a popular image recognition task and benchmarks about the effectiveness of the approach.

The white paper, authored by Pieter van der Wolf, principal R&D engineer, and Dmitry Zakharov, senior software engineer, both at Synopsys, opens with a general overview of machine learning in the context of IoT. Early applications of the technique already include voice control in smart speakers, distinguishing different types of human activity in fitness trackers, face detection in security cameras, and some aspects of advanced driver assistance systems in cars.

To give readers a sense of the basic computational challenge of machine learning, the white paper goes on to explain the difference between training and inference, and compares the volumes of input data involved in some of the basic applications outlined above.

The paper then explains some of the basic algorithms of machine learning, and the importance of efficient dot product calculations, in which an array of input data, perhaps representing an image, is multiplied by a separate array of weighting data, to create a single value in an output array. 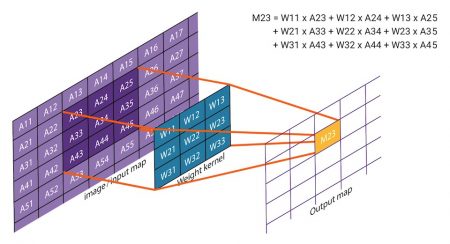 The paper moves on to discuss the impact of different forms of number representation in machine learning algorithms. A widely used approach to date has been to represent input values and weighting factors as 32bit floating-point data during network training, to capture as much detail as possible, and then to shift to lower resolution (16bit) fixed point representations during inferencing, to reduce the amount of computing needed in embedded applications. Work is also going on to explore the impact of using even lower-resolution number representations on the quality of the resultant inferencing, and on varying the levels of precision used in different neural network layers.

It’s at this point that the white paper starts to link the abstract requirements of machine-learning algorithms with the impact this has on real-world implementations, especially in power-aware IoT devices. There then follows an exploration of the way in which features of the Synopsys 32bit DSP-enhanced ARC EM9D processor core IP can be used to efficiently implement machine learning algorithms. Features such as dedicated address generation units, which can be set up with an address pointerto data in memory and a modifier to update the pointer in a particular way when data is accessed through it allow operands to be accessed from memory and results stored back into memory without explicit load or store instructions.

The ARC EM9D processor has other DSP capabilities that enable efficient implementation of other functions, such as pre-processing and feature extraction, including:

Having discussed the relationships between the computational needs of machine-learning algorithms and how these can be reflected for greatest efficiency in processor architectures, the white paper then explores how programmers can be helped to use these facilities through the availability of optimised software libraries.

The white paper goes on to discuss how these functions can be configured and invoked, and how they can be used to take advantage of processor features such as the dedicated address generation units. Code samples are provided.

The white paper wraps up by exploring how the combination of machine-learning frameworks, dedicated hardware and supporting software libraries can be brought together to serve some real-world applications. One of these is the CIFAR-120 objection recognition task, which I snow widely used as a benchmark.

The CIFAR-10 dataset holds 60,000 low-resolution RGB images (32×32 pixels) of objects in 10 classes, such as ‘cat’, ‘dog’ and ‘ship’, and is widely used as a ‘Hello World’ example in machine learning and computer vision. The objective is to train the classifier using 50,000 of these images, so that the other 10,000 images of the dataset can be classified with high accuracy. We used the CIFAR-10 CNN graph shown below for training and inference.

The white paper is available here.

Calibre scales to 4000 nodes for faster sign off in the cloud
The road to ES Design West: AI