With kind permission, Graham Bell of Real Intent has allowed us to share this personal remembrance of EDA analyst Gary Smith, who passed away late last week. 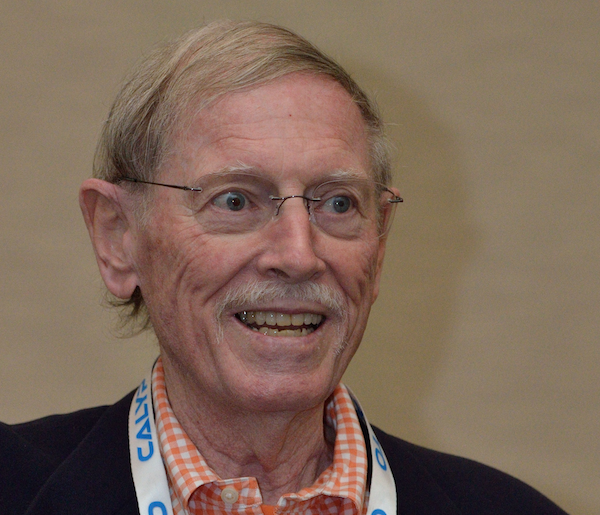 Long-time EDA industry analyst Gary Smith passed away on Friday, July 3, 2015 in Flagstaff, Arizona after a short bout of pneumonia.  He died peacefully surrounded by his family.

Gary was from Stockton, CA and graduated from the United States Naval Academy in 1963 with a bachelor of science degree in engineering.  His class yearbook says: “He managed to maintain an average grade point despite the frantic efforts of the Foreign Language Department. Tuesday nights found Gary carrying his string bass to NA-10 practice.”

Gary continued to be a musician and played his electric bass for years with the Full Disclosure Blues band at the Design Automation Conference (DAC) Denali party with other industry figures.  The band started out of a jam session in 2000 with Grant Pierce who asked Gary to help put together a group for the following DAC.  Gary had suggested Aart de Geus as lead guitar who ended up giving the band its name.

Gary got into the world of semiconductors in 1969. He had roles at the following companies:

In 1994, Gary retired from the semiconductor industry and joined Dataquest, a Gartner company, to become an Electronic Design Automation (EDA) analyst.  Gary described his retirement this way: “Instead of having to worry about tape outs and product launches, I get to fly around the world and shoot off my big mouth (which I seem to be good at) generally playing the World’s Expert role. Obviously there isn’t much competition. Now if I could only get my ‘retirement’ under sixty hours a week I’d be happy.”

In 2003, Gary had a health scare which was caught early and successfully treated.  Also around that time, he met his future wife, Lori Kate.  I won’t share all the cute details of their story, but Gary’s charm eventually won her over, and they were married in July, 2004. They became the parents of a bouncing baby boy, Casey Carlisle Smith, in September 2005.

In late 2006, Gartner shut down Gary’s analyst group and he decided to reform under the name Gary Smith EDA. The only thing that changed according to Gary was that all of the corporate stuff no longer interfered with his real work and finally got his working week down to 40 hours.

He was most recently a member of the Design TWG for the International Semiconductor Road Map (ITRS), editorial chair of the IEEE Design Automation Technical Committee (DATC) and served on the DAC Strategic Committee. He was also a past Chair of the IEEE Electronic Design Processes conference. Gary has been quoted and published numerous times in all the electronics publications including EE Times, EDN, and Electronic Business in addition to the Wall Street Journal and Business Week. In 2007, he received an ACM SIGDA Distinguished Service award.

During the last 15 years, I personally enjoyed getting together with Gary each spring in anticipation of the upcoming DAC show to give him an update on what was new in the EDA products I was marketing.  Gary always listened politely and then gave his opinion on what he thought was going to work or not.  If Gary liked what you were doing, your company was mentioned on his famous What to See @ DAC List.

I will miss Gary’s wit and insights, and his promotion of the electronic system level (ESL) for design.

To provide a loving memorial for his son Casey and granddaughters, Rachel and Shannon, his wife Lori Kate and the family kindly request that you share your favorite stories and/or pictures. You can send these via memory@garysmitheda.com.

A memorial service is in planning for the late morning of Sunday, July 12th in San Jose, CA.  If you are able to attend please send an email with the size of your party so that the appropriate arrangements can be made.  All are welcome. To contact Lori Kate, please use memory@garysmitheda.com.