Cortus has launched two 32bit soft processor IP cores for the “connected intelligent devices” market, a phrase it uses to highlight its belief that there is more to the current Internet of Things hype than just Things connected to the Internet.

“We’re avoiding the IoT buzzword,” said Roddy Urquhart, vice president of sales and marketing at Cortus. “The same constraints apply whether you’re connected to the Internet or not.”

Does the market need another soft processor core? Cortus argues that the IoT marks a third wave in the development of mass computing, whose first wave was defined by the PC market and whose second by mobile computing. The market for connected intelligent devices, it argues, will be so diverse that there will be room for many more architectures.

“The rules are going to change again for this new wave of devices,” said Urquhart. Designs will be particularly constrained by cost, and often by power consumption, calling for minimalist cores that can do just enough to satisfy a basic function, such as running a Bluetooth LE wireless stack.

To that end, Cortus has introduced a second version (v2) of its instruction set, in a bid to increase firmware code density and hence reduce on-chip memory requirements.

“Five years ago, embedded SoC designers cared about area and power,” said Urquhart. “Now they are also concerned about the size of memory necessary to support the firmware. So we’re trying to balance the core size and the code memory size.”

Cortus says it will keep offering products based on the v1 instruction set, and that any C/C++ or assembler code developed for the v1 cores can be run unmodified on the v2 cores.

The APS23 core is designed for in systems that are always on/always listening systems and those with less demanding clock frequencies, such as Bluetooth Smart.

It has a Harvard architecture, sixteen 32bit registers, a three-stage pipeline and a sequential multiplier. It supports the AXI4-Lite bus as well as Cortus APS peripherals. 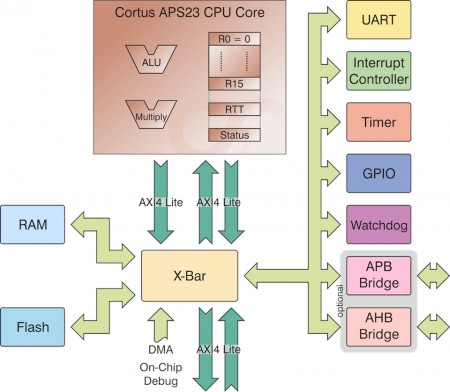 The minimal usable APS23 CPU is about 9.8kgate when optimised for area. Dynamic power is 12uW/MHz on a 90nm process.

The APS25 core is approximately twice the gate count of the APS23. It has a Harvard architecture, sixteen 32bit registers, a five-stage pipeline, a pipelined parallel multiplier and a hardware divider. There’s parameterisable instruction and/or data cache support, as well as support for the AXI4 bus and Cortus APS peripherals. 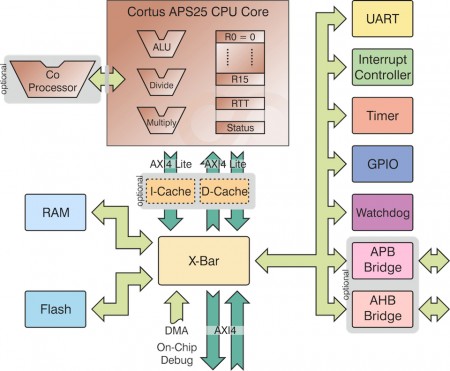 Figure 2 The Cortus APS25 is a more complex core with a deeper pipeline and coprocessor interface (Source: Cortus)

Maximum  clock speed is 344MHz from a 25.4kgate design drawing 20.8uW/MHz on the same process.

Urquhart argues that the small size of the cores and the coprocessor interface will make them a good basis for securing connected devices.

“The more you connect things together, the more you increase the attack surface for hackers to do something malicious,” he said.

Blackberry subsidiary Certicom has already used the coprocessor interface as a way of accessing a hardware accelerator for the key Galois field multiplication algorithms used in elliptical curve cryptography.

Under special licensing conditions, some customers have also been given rights to modify earlier versions of the core, for example by adding functions such as secure random number generators and secure clocking schemes.

Urquhart also argues that because the new cores are so small, it makes it easier to improve chip security by running two cores in parallel, but offset by a clock cycle. This means that any fault injection attack, such as disturbing its power supplies, buses or clock network will cause different faults in the two cores, which would otherwise return the same results, albeit offset by a clock cycle.