Test and measurement supplier Yokogawa has pulled together power meter and oscilloscope functions into a hybrid instrument that the company believes is needed to deal with a growing number of designs that either have to meet increasingly stringent energy-usage regulations or deal with often unpredictable renewable-energy systems.

Packaged like a digital oscilloscope with 20MHz bandwidth and a sampling rate up to 100Msample/s, the PX8000 was designed to offer more reliable power measurements that simply using a scope with a current shunt or some other form of current sensor as well as providing maths functions and history recall useful for spotting problems with harmonics and transients.

Clive Davis, manager of test and measurement marketing for Yokogawa in Europe and Africa, says: “We are not saying you can’t use an oscilloscope to measure power but you can’t expect, if you put it on, to get accuracy better than 5 to 10 per cent. That level of accuracy might be enough for the early stages of development but it’s not enough to test for compliance to standards. 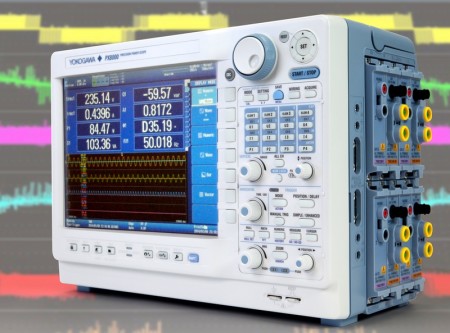 “People try to use an oscilloscope to measure power because it feels easy. But oscilloscopes are not designed to be temperature stable,” says Davis, leading to problems with drift in measurements. He adds: “A fundamental issue is the transient nature of power. That’s where you need integration between the power meter and oscilloscope, because the [conventional] oscilloscope isn’t calibrated.”

Power measurement, says Davis, is focusing more on changes in behavior as systems rapidly shift between operating modes, than on the stready-state measurements used to check harmonics, power factors and long-term efficiency.

“With transient power or non-continuous measurements of power, with a printer, for example, sometimes working hard, sometimes not, you want to look at power relative to its duty cycle,” says Davis. “A standard power meter can’t do that. The changes you are looking for get averaged out. That’s why people try to use waveform based products to measure power.”

The instrument samples to 12bit resolution and can be used, the company says, for accurate measurement of inverter pulse shapes, which can then be used to fine-tune inverter efficiency. A choice of input modules covers voltage, current and sensor measurements at voltages up to 1000 Vrms and currents up to 5Arms. Higher values are possible with external current sensors. Basic accuracy is down to ±0.1 per cent.

Mohammed Hafeez, product marketing manager for Europe and Africa, says the harmonics analysis is a key component, up to surprisingly high orders, for applications that include power supplies and wireless power chargers, where the inductive energy transfer components can lead to high frequencies being injected into the power signal. The PX8000 will analyze harmonics up to the 500th order.

“One manufacturer was making adapters. Some were overheating and burning out,” says Mohammed. “When we did an analysis we found a harmonic of the 384th order and that was causing the heat issue.”