Microchip Technology has become the latest company to use easy access to middleware components to encourage embedded-systems developers to move over to its tools and, with that, its 32bit microcontroller family. But the company claims to have taken a step further by providing first-line support for a number of third-party libraries that are accessed through its toolsuite.

“Customers have one place they can go for support for their software,” said Bill Hutchings, senior product marketing manager at Microchip, adding that this support extends to some pieces of middleware that are not bought through the chipmaker itself but which are supported by MPLab Harmony.

Hutchings claimed the libraries supported by Microchip in MPLab Harmony have been integrated and tested with each other already, arguing that this would save time not just in development but test. At the moment, Harmony includes third-party offerings from Express Logic, FreeRTOS, InterNiche, Wittenstein High Integrity Systems and wolfSSL, with many more on the way.

To handle different RTOS products, Microchip uses an adaptation layer to map between the middleware libraries and the underlying operating system, Hutchings said. 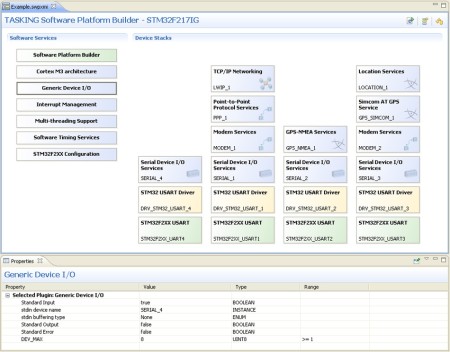 Chipmakers increasingly see the provision of middleware integrated with tools as a way of convincing developers to adopt their devices. Vendors such as Atmel and Silicon Labs have produced extensive graphical tool suites that let developers pull in drivers and protocol stacks graphically onto projects that contain information about the microcontrollers on which they will run. In principle, tools like these can perform dependency checks when modules are selected or dragged into the project to ensure that they will work together, accelerating the process of getting an evaluation or development board up and running.

Tool support has been instrumental in Microchip’s growth in 8bit micro controllers and may prove important to its ambitions in 32bit. Unlike most of its competitors, who have largely embraced ARM, Microchip opted for the MIPS32 core for its 32bit range of microcontrollers, choosing the microAptiv version for its latest generation, aimed at higher-end deeply embedded applications.

The ARM ecosystem, however, has its own collection of graphical development tools that harness middleware. The IP provider recently updated its Keil development suite to make it easier to incorporate third-party middleware into projects.

The Keil tools already shipped with a library of software. Version 5 released earlier in the year split the library into packs that could be downloaded on demand, as well as improving the way in which the source files were handled so that user edits would be preserved after an update to the public code.

Third-party tools supplier Altium has updated its own Tasking tools, aiming squarely at the ARM Cortex-M in the current version, to allow middleware to be dragged and dropped onto a target, activating modules when they are needed. The company has built its Tasking Software Platform Builder around the open-source Eclipse environment.

Harrold Spier of Altium explained at the recent ARM TechCon show: “If you add TCP/IP, then you will require multithreading. So we implement our own Posix RTOS. If it can’t find a service, the tool will tell you if you have missing requirements, so you can add the missing support service.”