Crowdfunding sites such as Indiegogo and Kickstarter have made it easier for would-be hardware suppliers to get their products out on the market but speakers warned at the GigaOm Roadmap conference in San Francisco this week that mass-market success takes a lot more. But the trend is also spawning incubators who can help streamline product design.

At Roadmap, small-business incubator Highway1 founder Brady Forrest said applications opened for the company’s Spring round of projects. Backed by a Chinese manufacturing-services company, PCH International, the Highway1 operation, as the name suggests, is centred on the West Coast of the US and, in particular, San Francisco. But it may represent the next step in the evolution of system design for entrepreneurs moving into hardware production thru crowdfunding iniatives such as Indiegogo and Kickstarter. In Ireland, PCH has signed a deal with the Tyndall Institute to help support hardware startups there.

The message from several of the speakers at GigaOm Roadmap, which will not be news to those with a hardware-design background at a mainstream supplier but is not obvious to those entering the world of connected devices from the world of software and smartphone apps, is that hardware is uncompromising. And it gets even less compromising when you move into volume production.

Tony Fadell, founder and CEO of Nest Labs and the industrial designer behind the original Apple iPod, said in his on-stage interview with host Om Malik: “It’s great that people have this democratised access to hardware. You can learn through that. But to ship a product and all the apps to go with it, it takes a really big infrastructure to pull that off. Not only do you have to have money, you have to have process. You need people who understand how to ship with a level of quality high enough that you don’t have the thing land back on your doorstep because of production faults. There is a whole range of things that you don’t get with a [pure software] app. And these considerations are in addition to the differentiation part of your design.”

Forrest said: “Prototyping is just the beginning. The hardest lesson for these startups to take on is that the prototype they have got is just not good enough to be mass produced in a manufacturing plant. They need to switch from using 3D printers for small runs to using CNC machining and moulding equipment. 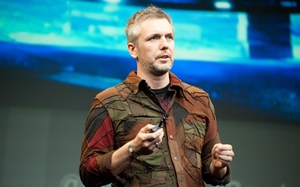 “We are taking these designers to China, where you can get circuits embossed on flexible substrates, where you can buy an Angry Birds phone or a phone held together by buttons but which still works,” said Forrest.

Although the successful applicants will visit China to see mass production in action, much of the Highway1 incubation works takes place in San Francisco. “We have 11 teams of people from all over the world here.”

Fadell said older techniques still work, and that they will work well with the new funding and entrepreneur-support environment: “There are so many avenues to reach out to people to learn about competition. There are so many more opportunities, like Indiegogo and Kickstarter. But you need to go work for your heroes to understand how you get it done and done in a repeatable fashion. I would definitely try to tell people to go seek those people out to find their path so that when they start with their venture they are ready to go.”

The environment for budding consumer-electronics companies in particular has become much more complex than when Apple launched the original iPod, Fadell said. Many of the iPod infrastructure we know today arrived later. Nest carries over the use of apps to provide a virtual front panel for home electronics devices such as thermostats and the recently launched Nest Protect smoke alarm

“We are a consumer product company,” said Fadell. “Its a summation of the hardware, the services back-end and the apps you need. There is this big suite of things you need just to get the product out.

“When you first saw the iPod, it didn’t have apps. You didn’t have the store. But if you don’t have the app now for their particular device people get upset. We have so many pieces of the puzzle to put together than we did 13 years ago.”