Other industries have had such feedback loops for a while but, said Michael Ford, senior marketing development manager in Mentor’s Valor division, a lack of cross-industry standards has held back PCB ERP.

“The competition between the [machinery] vendors has meant that each tended develop its own software in its own proprietary format, so there wasn’t a simple way of getting current information into your ERP,” he said.

The ERP vendors, for their part, have struggled to see why they should take up the challenge themselves, when PCB represents only a part of their bigger business – albeit a significant one.

Both new Valor products are the results of recent extensions that sprung from the line’s shopfloor focus. Since acquiring Valor in 2010, Mentor has added monitoring and harvesting capabilities initially aimed at gaining efficiencies in the manufacturing process, as shown ascending the right hand side of this graphic (historic NPI and DFM trends in the family are on the left). 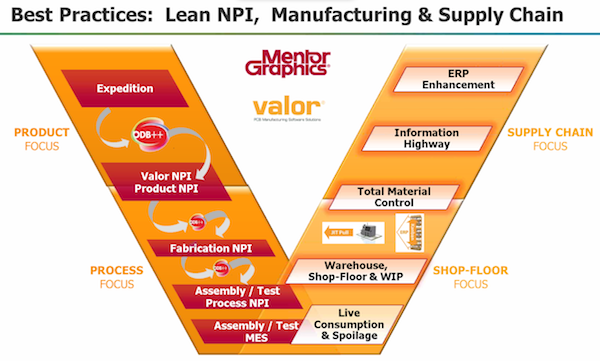 The evolution of Valor toward ERP (Source: Mentor Graphics)

“And as we did that, we asked customers where they could really extract value, and the answer was – repeatedly – ‘We’re really struggling to manage inventory.'”

The Warehouse Management tool now manages the process at the shopfloor level, while the Information Highway tool puts the resulting data into a suitable format for PCB ERP and sends it back to the ERP system.

One key point at which money is lost, as you would expect, is between the warehouse and the factory. But there is also a significant issue within PCB plants that Mentor thinks it is ideally placed to address.

“As things stand, a PCB ERP system might not recognize inventory as having been used until it goes on to a board,” said Ford. “But before then, you can have issues at the factory with materials being lost or damaged, which might lead you to think you have something on hand when you don’t. Spoilage can be 30%-50% of inventory that ERP simply doesn’t see. And at the same time, you can also be carrying – and have paid for – more of a material than you need.

“It also used to be the case that an ERP system could give you a long-term view, maybe five months. But we’ve already had kanban and just-in-time, and now we’ve moved into point-and-click e-ordering, which means inventory should run even leaner.”

Another e-ordering factor is customer behavior. PCB manufacturers are now expected to switch or tune the composition of one product – never mind within a broader product family – almost immediately, particularly in the volatile consumer electronics sector.

The challenge there can emerge from a single cellphone model which, in reality, ships to different global markets in sometimes several thousand variations. But it could equally arise from a piece of telecoms infrastructure hardware which ships in the hundreds but has complex configurations.

For the cellphone, the question might be whether there really are enough parts on hand to meet the revised order. For the network box, materials will be stocked in far less depth and have specialist and longer delivery dates, so spoilage is the enemy if the PCB ERP isn’t catching it.

No more PCB ERP ‘back flush’

Together, the Warehouse Management and Information Highway tools are about gathering the up-to-date usage and spoilage numbers, and feeding them into the planning cycle at the right time – ending the ‘back flush’ that was too often restricted to providing data at the finished product stage, said Ford. These days, it’s a simple-enough sounding task, but after beta-testing the extended Valor tools, Ford added Mentor found that stabilizing accurate inventory came to represent 80% of ROI for one user. 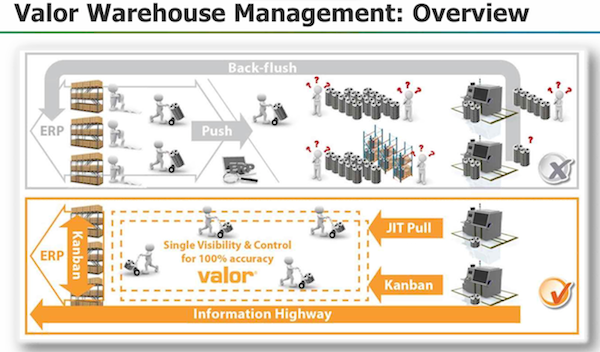 How the new Valor tools combine to end the PCB ERP back flush (Source: Mentor Graphics)

“We don’t know if this will work, but we do know that 75% of the materials tied up in inventory is waste, off the bottom line. And we’ve done this because it’s what the customers have been screaming for,” noted Ford.

Find out more about Valor’s bid to put money back on the table with better PCB ERP, and about the product family in general, by clicking here.

HP: bring us your hardware, your workloads, your mass of data
The prospects for GALS: Real Intent’s view