The EDA industry has a way to capture the embedded software market, analyst Gary Smith said ahead of the Design Automation Conference in Austin, Texas this week. But it’s not through tools – it’s through models.

“Should or can EDA take over the embedded market?” mused Smith in his pre-DAC analysis of the EDA and chip-design business. He pointed to the problems that chipmakers have, not so much with the cost of hardware design but of software.

There are several problems.

“Universities aren’t going to turn out enough middleware guys. There is an opportunity to automate the middleware stuff,” Smith said and pointed to another issue. “The architects are turning out designs that are not producible. They hand the designs off to the guys with the big boxes and they have to reimplement it. 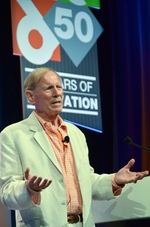 “They put in accelerators and the power management. But the complexity is making the design really hard for the software guys because they don’t know how their software is going to work. They are all trying to work out how to build systems that will pass the power constraints,” Smith said.

“Guys who have the accurate models are the ones who will make a lot of money in this business,” Smith added, arguing that expansion out of IC design is inevitable. “Cadence, Synopsys and Mentor will buy the embedded, IP and mechanical businesses…IP [in particular] is a big part of what EDA is going to do in the next ten years.”