It’s getting a bit like Beaujolais Nouveau really: The BeagleBone Black est arrivé.

And it’s all rather cool. The price has indeed dropped, nearly halved in fact to $45 from $89. And there’s now a very solid 1-GHz Sitara AM335x ARM Cortex A8-based processor from Texas Instruments.

The BeagleBone Black has, as expected, USB, Ethernet and HDMI ports and now 2GB of integrated storage to run pre-loaded Linux software, including the OS and the Cloud9 IDE for development. Again, a fair bit of effort has been put into the incorporated software to make it easy for embedded Linux newbies to familiarize themselves with the technology. On the RAM side, you get 512MB of DDR3, and there’s support for the OpenGL 3D graphics API. 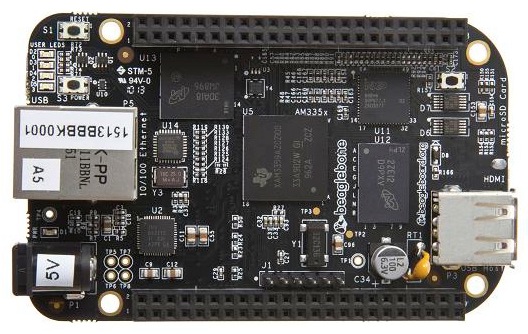 Both for newcomers and more experienced users, it’s the ‘capes’ – BeagleBoard.org’s nickname for supported plug-in boards – that may provide some interesting starting points.

When we first saw that BeagleBone Black capes now include a Geiger counter, 3D printers and a telerobotic submarine, there was a slight worry that BeagleBoard was chasing a hitherto undiscovered market among ‘Doomsday Preppers‘ – you do power the thing off just a USB after all. More down-to-earth options include a DMX lighting controller and LCD touch screens.

Of course, the Raspberry Pi is still a fair bit cheaper at $25. The real question, though, may reside in which of these proliferating boards can develop an infrastructure that best engages the growing ‘Maker’ community, rather than hobbyists and students as originally intended. That much is still up for grabs.

Meanwhile, the distributors are now harvesting orders. And if any of you out there have tales of what you’re putting together with Blacks, Pis and other entry-level dev boards, we’d love to hear them. Drop us a line (contact at techdesignforums dot com) and we’ll try and feature some of the best.

One Response to The BeagleBone Black is uncorked