Cloud computing is gaining ground in EDA but close to a third of organizations are planning to stay with on-premises computing for the foreseeable future. This was one of the findings of a survey conducted by IC Manage, which also took in attitudes to design data and IP-reuse management.

Conducted during October by an independent firm contracted by IC Manage, the survey was emailed to SoC, IC and systems-design professionals and received just under 140 responses. Out of that total, 31 per cent said they expected to continue with on-premise computing for EDA in the future. However, almost 70 per cent indicated they already use cloud computing or plan to use it within the next two years. Just under a third are already employing cloud computing.

The majority of respondents with plans for cloud computing aim to use it for bursting or for selected tools. However, 10 per cent of the survey respondents said they use the cloud to host all their design tools and another 12 per cent are planning to move to this model.

“Cloud adoption for semiconductor and system design and verification has been slower than for other industries for three primary reasons. The first obstacle has been security concerns. Many companies have now done comprehensive security studies and determined the cloud will safely protect their assets, so we see a significant progression in adoption. However, there are companies that continue to be cautious with more of a wait-and-see approach,” explained Dean Drako, founder, president and CEO of IC Manage.

“The second factor is the enormous investment many organizations have in their existing compute farms. Thus, as the survey shows, many companies see hybrid cloud bursting as the best way to leverage the cloud,” Drako added. “The third obstacle is navigating the efficiency and cost aspects of using the cloud for design and verification, including data transfer times and storage costs. Given there are terabytes of data involved, these can add up quickly.” 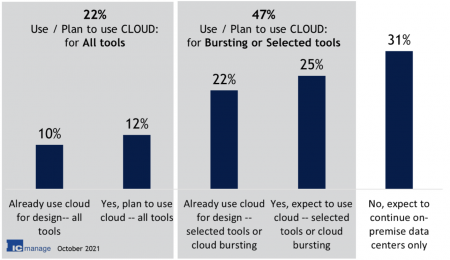 Hand-in-hand with the interest in burst usage models, the resource needs of projects were recognized as the main careabouts among respondents in terms of what data-design management systems might be able to forecast. Over half wanted to identify resource needs and the impact of late design changes on schedules and resources, well ahead of tapeout-date and process porting-schedule projections.

In parallel with the shift towards cloud usage, the survey identified continued growth in the use of multisite design practices. A previous survey conducted found this was already prevalent in 2014, with 82 per cent of respondents saying their organization practised it. This has grown to 89 per cent in 2021, further driven by acquisitions and mergers.

One of the implications of the mergers is that companies now operate multiple different design-data management systems, though they may not be combined on individual projects. In 2014, 56 per cent said their companies were using multiple design-data management systems. This has now grown to 71 per cent. The number with five or more has doubled from 5 per cent to 10 per cent, though the number with two such systems remain the majority. Though the majority of companies operate multiple management systems, only just over half are seeking improved integration. One reason for the difference is that each may be largely confined to specific projects and so the need for integration is not universal. However, a trend that pushes the need for integration up, said Drako, is the need for some engineers to oversee the design and integration efforts between the individual teams.

Since 2014, requirements for what data-design management systems can do have changed, though not drastically. Today, the biggest concern is the ability to manage designer handoffs and maintain audit trails, whereas the number-one concern in 2014 was visibility into checkins and checkouts. This has dropped from over 60 per cent of respondents in 2014 to 42 per cent in 2021. Conversely, the audit trail requirement has grown just 6 points to 47 per cent in 2021.