With the aim of accelerating the development of applications and algorithms that harness sensor fusion, startup Sensor Platforms has released as open source its Open Sensor Platform (OSP).

OSP is a framework for sensor hubs currently written to run on the ARM architecture, designed to abstract details of underlying sensors from applications and algorithms that use combinations of sensor readings to provide situational awareness. Among other applications, Sensor Platforms is developing software that tries to detect when a phone is sitting in a pocket or bag so that it doesn’t initiate calls if the touchscreen is activated by something rubbing against it. OSP is designed to avoid the need to write new sensor interfaces for each target device.

ARM has given its backing to the open-source project with plans to make contributions to the Github-hosted project to provide support for the CMSIS hardware-abstraction layer, the RTX operating system and the mbed software development kit. 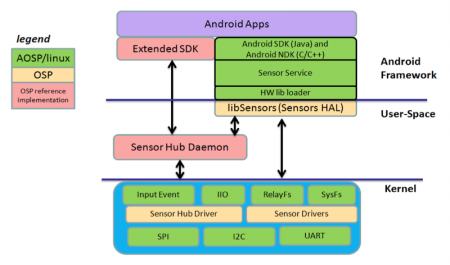 Initial implementations of OSP provide a framework for Android’s KitKat release running on a Nexus7 tablet that communicates with an STMicrolectronics Cortex-M3 evaluation board acting as a sensor hub. The current example is designed for use with the Keil-MDK toolchain but future versions are expected to work with the Gnu gcc compiler. The companies also expect embedded versions of OSP to appear that do not rely on Android.

By providing compatibility with OSP, makers of microcontroller-based sensor hubs should should find it easier to gain access to device-level firmware and a wider range of sensors. Developers of algorithms should be able to target OSP rather than developing specific drivers for each sensor they encounter.

“Open source initiatives are critical to accelerating innovation in the embedded market,” said Willard Tu, director of embedded solutions marketing at ARM. “The ecosystem building around ARM’s mbed platform is one of our efforts to spur entrepreneurial efforts and we expect our contributions to OSP to have a similar, galvanizing effect in the developer community.”

Kevin Shaw, CTO of Sensor Platforms, added: “OSP will unlock a whole new generation of sensor innovation, as developers can now focus on building great devices instead of building interfaces. With this, we expect to see a growing need for best-in-class algorithms providing amazing contextual capabilities.”