Power converters are arriving on the market with the aim of simplifying the job of building energy-harvesting systems. This is an area many silicon providers have avoided, mainly because of the harsh realities of energy harvesting – the power is hard to capture because it turn up either at very low voltage or at high voltage but with difficult phase issues. As a result specialised techniques are needed to deal with the inputs. But companies such as Analog Devices, Anagear, and Spansion have joined the handful of existing players in this space, focusing largely on integration.

Formerly a memory specialist, Spansion’s interest in energy harvesting came as the result of the company’s acquisition of parts of Fujitsu’s microelectronics business. The parts sold to Spansion include a series of ARM-based microcontrollers and both buck and boost converters aimed at harvesting applications.

For commercial parts, there was really just one game in town for a number of years: Seiko Instruments used silicon-on-insulator (SOI) technology to make charge pumps that could drive DC/DC converters from very low voltage inputs, such as the 300mV or so commonly encountered in vibration, thermoelectric and small solar harvesters. Linear Technology and Texas Instruments joined in with low-voltage DC/DC converters over the past few years. 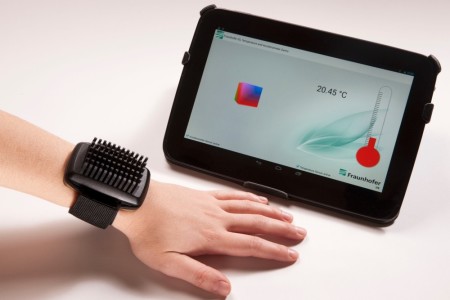 At the Energy Harvesting & Storage Europe 2014 conference in Berlin Henrik Zessin project manager at the Fraunhofer Institute for Integrated Circuits (IIS) said piezoelectric harvesters, although they generate a nominally high voltage – demanding a 50V-capable process – when pressed or distorted “they don’t really produce a voltage, it’s more of a charge that can be modelled as a current source with a capacitor in parallel. You lose a lot of energy that gets moved in and out of that capacitor.”

Using a conventional rectification scheme wastes energy because of phase issues, Zessin says. “You can use an inductor to get rid of the phase shift. But there is still a challenge as you need low-power control circuitry.”

For Fraunhofer, an inductor – used in this case with a JFET –  also helps solve the problem of harvesting energy from low-voltage thermoelectric sources. The institute has developed a number of ASICs to help power energy-harvesting systems that are increasingly moving to hybrid architectures that combine energy capture with some form of long-term storage, such as a battery or a supercapacitor.

“You might use harvesting to extend the times between recharging,” says Zessin.

Mike Long, segment marketing manager for security and building automation at Analog Devices (ADI), says: “We are not trying to eliminate the battery, just enabling the customer to replace the battery less often.”

Both ADI and startup Anagear are aiming squarely at these hybrid systems, using CMOS integration as the driving force. Long says: “Maybe if you are harvester only then it can make sense to pay more for a more specialised converter. But with the battery control, SOI can be cost prohibitive.”

ADI’s ADP5090 contains a boost converter for low-voltage thermoelectric and solar sources as well as an interface to a backup battery or supercapacitor. Support for maximum power-point tracking (MPPT) means the boost converter works at a voltage that helps maximise the output of a harvester. 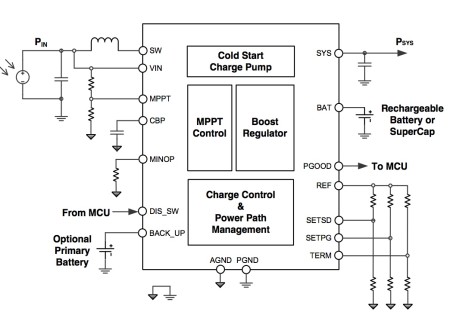 MPPT is most commonly applied to solar cells, which can experience large changes in output voltage and current depending on the intensity of the light falling on them. But MPPT also applies to thermoelectric generators, says Zessin. “If the absolute temperature changes so does the impedance of the generator. If you optimise only for one point you lose efficiency.”

In the ADI device, a charge pump allows the boost converter to start up from very low input voltages although it contains additional circuitry to check whether the voltage is so low that conversion would actually start to drain the battery.

Goodspeed Yang, product marketing manager for power management at ADI, says: “You don’t have the luxury to waste any energy so we sense the open-circuit voltage. If it is below a threshold, the converter shuts down.”

The ADP5090 can also shut the converter down to help wireless communications. “This part is going to power an RF transceiver very often, so you can shut down the boost regulator while transmitting. The customer gets much cleaner rails while transmitting,” Yang explains.

ADI has worked with organic solar-cell specialist Solarprint, which is changing its name to Ambeon, to develop a prototyping system for wireless smart sensors. The Ireland design centre has, at the same time, come up with software to predict how much energy a system will consume and can provide some counter-intuitive answers, such as using a higher data-transmission rate to reduce overall consumption. Although peak power might increase, the ability to shut the transmitter down more quickly and let the microcontroller sleep for longer improves the duty cycle and leakage and, as a result, total energy consumption.

Late last year, Dutch startup Anagear entered the market with a high-integration power converter and system controller that is able to absorb some of the functions normally provided by a microcontroller to reduce total system energy. However, the company followed up with a stripped-down version at Printed Electronics 2014 for situations where customers want the microcontroller to handle functions such as system timing. The aim was to create a device for users with limited experience of energy harvesting.

Guus Dhaeze, vice president of marketing and sales at Anagear, claims: “Energy harvesting is new to a lot of customers. They say we want to do solar harvesting and ask ‘what else do we need other than the solar panel?’ This is a fully integrated solution. It’s not just for the front end where the harvesting takes place. First we boost convert with MPPT. Then we do energy-storage management. And then we do downconversion for system functions in an efficient way. That is all in the one device. There is also an optional primary battery input. 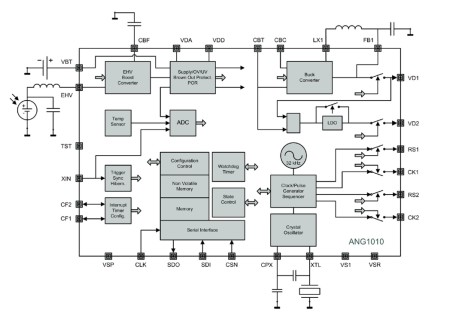 “We also have a precise timing engine on the chip, which is calibrated for temperature drifts. It’s used to determine the duty cycle and switch off the microcontroller when it is not needed,” Dhaeze adds.

For situations where the user wants the microcontroller to perform the timing and comparator functions Anagear now has the ANG1015.

“The 1015 removes the timing engine so we rely on the microcontroller to do the timing functions,” says Dhaeze. “We detect how much current is drawn by the microcontroller. If it drops below threshold, because the device has put itself to sleep, we also go into an eco-mode, where power drops to 450nA. The 1015 also detects when microcontroller wakes up and goes back into normal converter mode.”

The reverse is also possible – using the onchip comparator and timer to realise very simple standalone systems that trigger based purely on an input change or timing event. Dhaeze says: “The ANG1010 was designed with the idea of developing a wireless-sensor node. But we realised there are other apps that are standalone, such as a fragrance dispenser, where cost is important.”

Although the rise in interest in harvesting has led to an increase in the number of off-the-shelf products appearing, the requirement for energy-efficient integration encourages the use of ASICs, says Philip Poole of Swiss specialist Microdul. “We came from the Swiss-watch industry so we have a lot of experience in low-power design. You need to take account of every component in the chain. It really pays to look at ASICs because you can get the absolute lowest power consumption and it is possible to reduce the total cost.”

In a presentation at Printed Electronics 2014, Poole used the development of a piezoelectric-powered remote control built by Algra as an example. A button-press generates 10 to 20µJ of energy. But to allow enough headroom to drive the RF transmitter, the ASIC had a current budget of just 40nA.

The experience in watches is helping Microdul build a motion-harvester ASIC that will be used to drive a quartz-based circuit that will stabilise an otherwise mechanical-watch design.

As interest in energy harvesting increases, partly driven by the Internet of Things, we can expect more off-the-shelf parts suppliers to emerge with their own take on this area.