A look at some of the key techniques needed to ensue good code coverage during the verification of low-power SoC designs.

Low-power SoC designs use multiple coding styles and include complex power-aware and non-power aware macro models. They have multiple power domains, each of which may have multiple operating modes, dynamic voltage levels, and power management units that sequence the actions of power-control sub-systems. This article, adapted from a 2018 DVCon presentation given by members of the verification team at Mentor, a Siemens business, explores issues surrounding the verification of low-power SoCs.

In a typical low-power simulation, power-aware cells and power-control logic are added to the design RTL, which means that the RTL which gets simulated is different to what the designer wrote. Verifying the design’s functionality therefore means generating test vectors to exercise the original code, the additional power elements, and the interactions between the two sets of functions.

There isn’t a standard way to ensure good coverage of low-power designs, because neither the Unified Power Format (UPF) Language Reference Manual nor the Accellera Unified Coverage Interoperability Standard covers the issue. Instead, many verification engineers take an ad-hoc approach, building on the UPF standards and the facilities of verification tools. However, it is still difficult, error-prone and time-consuming to develop effective RTL code coverage for a low-power design.

A power-intent specification and the basic concepts of UPF

The IEEE’s 1801-2015 UPF standard enables designers to specify their power intent for a design. It is based on Tcl and provides concepts and commands for describing the power- management requirements for IP blocks and SoCs.

A power-intent specification in UPF is used throughout the design flow, and may be refined at any point in the design cycle. Some of the key concepts and terminology include:

Code coverage is a way to assess the progress of functional verification. It helps verification engineers understand how well a design has been verified and which areas need more work.

Code coverage metrics are collected automatically by verification tools and tell the user how thoroughly a design’s HDL has been exercised by its testbench during simulation.

Functional coverage measures how well a design’s functionality has been covered by a testbench. Users have to define the functionality to be measured using covergroup and assertion constructs. Functional coverage done using covergroups or assertions does not have much impact due to low-power semantics and can be achieved in low-power designs easily.

There are different categories of code coverage:

Verification engineers used to have standard and low-power versions of a design, each with its own regression set-up. Users would rely on the code coverage of the standard design and the power object’s coverage of the design’s low-power version to reassure themselves that they were achieving full design coverage. Now all designs have to be power-aware so the code-coverage metric needs to be collected on the low-power design as well.

Typically, the RTL model of a low-power SoC consists of soft macros, hard macros, power controller logic, a testbench and checker/coverage modules. Hard macros can only be simulated if they have been supplied with models that define their behaviour. Ideally these should have power-aware behaviour models with a power management interface, because code coverage of these models will not be affected by power artefacts introduced by UPF. Test vectors for voltage-controlling logic, such as that within the power management controller, should be modelled in the testbench.

In a low-power simulation, the RTL design code is passed to the tool along with a UPF file. The tool inserts isolation, level-shifting and other power-management cells into the design RTL, and may also add logic to enable power-aware simulation. As a result, the original RTL may not be the same as viewed in the source file. This creates challenges in low-power code coverage including:

In some designs the power-aware (PA) logic is modelled inside a block with “ifdef PA”. That is, the block only gets activated and covered when low-power simulations are run.

In a low-power design, it is important that the power control unit creates complete test vectors to verify all power elements and the complex interactions between these elements, at a higher level of abstraction. Achieving closure for a low-power design involves ensuring that all its power objects are covered in all possible states and transitions.

Low-power designs that use hard macros need access to models that describe the macro’s power-aware behaviour in a way that is only visible when the UPF connections are made. These behavioral models:

The simulation tool makes UPF connections to the Vdd and Vss supply pins, and does not insert any power-aware logic into the model.

The following items need to be considered to ensure good code coverage of such models in a low-power design:

In a low-power simulation, RTL code is passed to the tool along with a UPF file, which inserts isolation, level-shifting and other cells into the design. It may also insert some logic to enable power-aware simulation. This modifies the original RTL.

Normally, whenever ‘in1’ or ‘in2’ changes, the statement is reached. If, in a low-power simulation, power to this part of the design is Off, then the statement is not reached, and the signal ‘out’ will get a value ‘x’. When the power is enabled, the assign statement will get triggered. Moreover, the number of times this statement gets triggered now also depends on the block’s power status, along with ‘in1’ and ‘in2’.

There is no way in RTL code coverage to capture the activity in the block because of new powering logic.

Verification tools add statements to design RTL so they can simulate its power-aware behaviour. These additional lines change the numbering of the design RTL statements, creating inconsistencies between the original design code and the power-aware code which mean that code-coverage analyses produce incorrect results. We can see this in Figure 1, below:

In addition to introducing new lines/statements into RTL logic, some power logic gets inserted into RTL statement in case of expressions. Consider the following example:

Verification tools may insert new branches into the design RTL as part of making it power aware. This also leads to inconsistent code coverage results for standard and power-aware versions of the design, as the insertion of branch statements affects line numbering.

Finite state machine coverage reports identify whether a simulation run could reach all of the states and cover all possible transitions, or arcs, in a given state machine. In a standard simulation, the user assumes the design is powered throughout the simulation run and defines the states and conditions required for an object to reach a particular state. During a low-power simulation, when power is removed the object is left in an arbitrary state. Verification tools reflect this uncertainty by adding new states to the state machine, for example xx. Once again, the tool’s efforts to reflect the impact of adding power-management features to a design is to undermine the code coverage metrics. Consider Figure 3:

When the power goes down in the low-power version of the FSM logic, the value of the state becomes 2’hx. Since the user’s RTL design does not define a state associated with that value, verification tools create a new state (say, xx) to ensure the object is in some state during the simulation run. Since FSM coverage reports show how many states and transitions in between these states are hit during the simulation run, the introduction of the new xx state gives improper results.

Addressing the challenges of code coverage in low-power designs

How do we visualize code coverage results for low-power designs, given these issues?

Look again at this example code from earlier in the white paper:

The power-aware instrumented RTL expression has been modified to include power logic without introducing any new lines/statements. But the modification has increased the number of input terms to the expression and therefore expression coverage metrics will not give the same results as on the design RTL.

To fix the problem, one can exclude the new input terms and so ensure that the expression coverage will only depend on the design RTL.

The issue with calculating branch coverage is that adding power-aware logic to a design I introduces new branches, which changes the line numbers of the original RTL and also gets included in branch coverage.

Adding power logic to the design RTL can cause signals and ports which are either unused or unchanging in the design RTL to start toggling, creating false toggle coverage results.

As we can see in Figure 2, the always block can get triggered whenever there is activity on the PWR signal, even though there is no activity on signal a. This makes signal t toggle. Since there is no way in RTL code coverage to exclude toggling activity caused by the addition of power logic, there will always be a difference in toggle coverage results between the design RTL and the power-aware version.

Introducing new states to an FSM because of the insertion of power-aware logic, for example to ensure that an object is in a particular state (e.g. xx) during a simulation run, will create different coverage results to those for the original design RTL. One way to tackle this issue is to exclude these states.

In practice, it may not be as straightforward to apply the techniques discussed above to preserve the validity of coverage metrics on complex designs. Consider the example in Figure 4, below, in which a retention strategy has been applied to a simple D-flipflop: 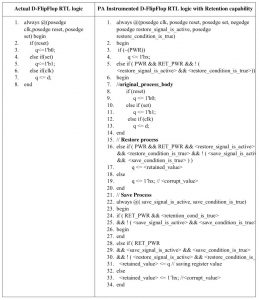 To ensure the state of each register in this example is retained during power cycling, its behaviour has to be modified. This leads to a change in the process sensitivity list and the body of the process for each register. An additional process is also created for the saved state.

Working out what to exclude from the modified code is complex and therefore demands meticulous analysis and the development of further tool support.

Achieving verification closure of design takes both full code coverage and full functional coverage, of both the original design and its low-power variant. Low-power coverage data helps to ensure that regression suites adequately test the power-aware elements of the design, including dynamic power-aware checks and power-aware states and transitions, as created through the UPF file with the add_power_state, add_port_state and add_pst_state commands.

The SystemVerilog construct “Covergroups” help in sampling signal/property activities at desired sampling points through coverpoints and bins. These are used to collect coverage numbers of states and their transitions. A low-power coverage methodology that combines UPF 3.0 HDL functions with SystemVerilog coverage constructs can also help the user to write fast and reliable low-power coverage infrastructure.

Power/port/PST states capture how the designer wants the low-power design to operate, and hence have a huge impact on the functionality. It is therefore essential to verify the occurrence of various states and their transitions to ensure the proper operation of a low-power design as well as to achieve verification closure for it.

It’s possible to define other coverage metrics, based on different properties of upf objects and design requirements, to calculate a low-power coverage metric which, when combined with code coverage, results in the full verification closure needed for low-power SoC designs.

This webinar introduces the Questa CoverCheck methodology that automates and accelerates the process of code coverage closure.

This webinar introduces the use of code coverage in today’s HDL design and verification flows.