Some 161 papers will feature during this year’s 44th Design Automation Conference (June 4-8) in San Diego with four strands at the forefront. System-level design (ESL), design for manufacturing/yield (DFM/DFY), low-power design and verification accounted for more than 40% of submissions this year, and the final line-up represents these topics in broadly similar proportion.

For 2007’s general chair Steve Levitan, Jurenko Professor of Computer Engineering at The University of Pittsburgh, this is indicative of two trends in EDA activity.

“It’s interesting that system-level is very much at the top of the flow and then you have DFM and DFY which sit at the bottom. And right now, the biggest push to develop new tools is in those two areas. Also, we have much more system-level at DAC this year than ever before,” he says.

But these long-discussed market segments are not necessarily those that captivate Levitan the most. This becomes clear when he discusses the second visible trend.

“To me, what’s really interesting is what you’re seeing with low-power design and with verification. These two areas are now largely about spanning abstraction and cross-cutting different segments in the flow. And more of that abstraction-spanning focus emerges in other places in the program, looking at variability analysis, looking at reliability and so on. It’s in the papers, the tutorials, the panels and the special sessions.” 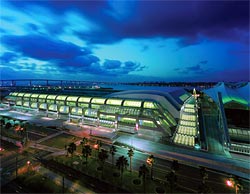 Back to the San Diego Convention Center

It is not surprising that Levitan should be particularly sensitive to this latter trend when you consider the direction that his own academic work has taken. “For the last 20 years, I’ve been looking at both tools and architectures that don’t use traditional technology. I’ve been looking at optical, at MEMS, at micro-optical systems and, more recently, at fluidic systems,” he explains. “What you find in these areas is the idea of co-developing the CAD tools and building the systems. There’s a very close interplay between the two activities.

“You see the need for new kinds of EDA tools and then as you work on them, they give you ideas about the new kinds of systems that you might be able to build. And, yes, all these tools have to span domains and, therefore, abstractions also.”

On Monday (June 4), Lawrence Burns, vice president of R&D and Strategic Planning at General Motors, will presage the conference’s dedicated automotive strand with his speech, “Designing a New Automotive DNA”. He will specifically address the growing impact of new fuel sources, electronics systems and controls, and the design challenges they raise. DAC’s automotive day will then follow on Wednesday (June 6), featuring a special session, dedicated panels and invited talks, among other features.

On Tuesday (June 5), Oh-hyun Kwon, president of the System LSI Division of Samsung Semiconductor Business will formally open DAC with his speech, “Perspectives on the Future of the Semiconductor Industry: Challenges and Solutions.” From his position within one of silicon’s largest players, he will describe how Samsung is responding to declining unit prices and burgeoning R&D costs through activities such as new collaborations and partnerships as well as the ongoing drive to innovate.

DAC’s traditional business track takes place on Tuesday (June 5) beginning with the morning keynote which will be followed by an all-day management seminar, “Innovation or Extinction — The Choice is Yours”. Speakers confirmed for this event include Geoffrey Moore, bestselling author of such books as Crossing the Chasm and a founder of The Chasm Group; Raul Camposano, former CTO and general manager of the Silicon Engineering Group at Synopsys; and Jim Smith, general partner of early-stage investment group Mohr Davidow Ventures.

A full Pavilion panel program will run in parallel, located on the exhibition floor, and featuring topics such as Trends in EDA; Managing Mixed-signal Designs; DFM; System-level Wireless Design; and How to Anticipate the Next Killer App.

A special tutorial developed by DAC in conjunction with the International Solid State Circuits Conference will be offered on Variability in Design.

Five workshops are scheduled for the Sunday (June 3) before the main conference begins on the Design and Verification of Low-power ICs; Integrated Design Systems; Low-power Design Intent; UML for SoC Design; and Hardware Development Software.

As specific examples of this kind of development work, Levitan cites research into multi-level simulation at both the functional and component/device-level in a concurrent environment, and into modeling signal flows where the flow could be optical or electrical, or based on force or acceleration.

“The questions then get posed as to how you put this kind of capability into one design environment that you can actually work with, how you then add new technologies to that environment when you need to, and how you can incorporate new paradigms for simulation,” he says.

Levitan credits the Ptolemy program at UC Berkeley as the genesis of many of the concepts with which he works — “We’ve definitely taken a lot of the ideas that were there and run with them” — but notes that there is also a historically flavored irony to this model.

“The other weird part is that when I started out in the field in the 70s, it is essentially what was also happening in traditional CAD. The people doing the tools research were also building chips, and information was going back and forth,” says Levitan.

“Now when you look at ESL, at mixed signal, at some of the new ideas coming forward in DFM and lithography and things like that, people are again doing the design and building architectures at the same time. And they’re building CAD tools as they need to.

“Those new ideas will get integrated into the mainstream flows. It’s not about in-house tooling so much. The EDA vendors see more and more what’s happening and, to their credit, they are now much more welcoming about integrating new technologies.” The same thinking is also present within the DAC program when it comes down to 2007’s main theme. “It’s our third year of doing this. Before, we’ve had wireless and then multimedia and games. This year, it’s automotive,” says Levitan.

He says that two concepts underpin this particular choice. The first is DAC’s objective of providing conference elements that will attract more engineers by promising more than simply access to the latest thinking about a new algorithm. “That’s still important, but when you are looking at the distinction between attracting tool developers and engineers, that kind of information might not be enough to bring the engineers to the show,” says Levitan.

The second concept is, again based around the notion that the roles of EDA and CAD in general are being extended in the first decade of the 21st Century. “The [automotive] theme is a mechanism for highlighting the fact that we’re really talking about whole systems here. And by ‘systems’ we don’t mean a circuit board anymore. For this particular topic, we’re talking about the whole automobile,” says Levitan.

“You have to worry about things all the way through from the user interface on the entertainment system, the look and feel of the GUI, all the way down to the high voltage electronics in the spark plugs. Then there are aspects as apparently abstract as the radar you might want to incorporate for collision avoidance or as apparently mundane as how you track revisions in cable harnessing.” DAC 2007 will address this market’s especially holistic demands across a number of panels and special sessions, led off by a keynote from General Motors’ vice president for R&D and Strategic Planning, Lawrence Burns. At the same time, other aspects of the program will cover the long-standing issue — some might say ‘canard’ — of how a company actually does do business with Detroit (and the world’s other Motowns).

Then, there is the introduction of the Wild and Crazy Ideas strand, WACI (pronounced as in Dick Dastardly’s ‘Races’) for short. “The idea here was to attract newer ideas that might not yet be fully fleshed out or that might be seen today as being on the fringe of what DAC is about,” says Levitan. “The important thing we’re saying is that WACI might give you a flavor of what will enter the EDA mainstream over the next five to 10 years.

“But there’s another aspect to DAC that WACI addresses. If you go to, say, a physics or a chemistry conference, you will find rooms with just 10 or 15 people in them, and there are maybe 20 sessions like that going on at the same time. Each one is highly specialized and that small group of people in there is intensely interested in the topic. Well, we don’t do that at DAC — we traditionally have gone for these big sessions on topics that are of more universal interest.

“WACI now becomes a way of bridging that gap. We’re going to have short, 15-minute presentations and we get the opportunity to look at things like the influence of biology, nanotechnology, novel ways of integrating packages, spray-on electronics and things like that.”

One final aspect of the program that Levitan highlights is also about thinking big — quite literally — and perhaps of more immediate importance: design in the multi-core era. “We have one special session and one pavilion panel on multi-core and we’re now genuinely talking about 1,000-core devices in the not-too-distant future,” says Levitan. “I think it’s important that we communicate that we don’t see this as a low level issue, because it isn’t. How will we program these things? I don’t think anybody knows yet but the programming models are going to have to change, and we just have to look at that.”

At the highest level of all, Levitan’s conversation often comes back to the growing influence of CAD right across today’s markets and technologies, and as general chair of DAC 2007, he has led the development of a conference program that genuinely reflects that fact.

The full DAC 2007 program and registration forms are available online at www.dac.com.