The launch of a broad-based IDM/foundry consortium that is to prepare for the shift to 450mm wafers already offers some hints as to the future shape of chip manufacturing and the planning demands it will impose on all design managers in the near future. The game is shifting from pay-for-capacity to outright pay-to-play for those who want to stay at the leading edge.

The roadmap toward production on 450mm wafers is taking shape, meaning the time has come for all design companies to start thinking about where they might fit (if at all) in their own medium-term planning.

Intel and TSMC committed to the long-discussed transition at the beginning of the year, and fab equipment suppliers have been quietly preparing to serve it for a while. But the last few weeks have seen an important further step with the founding of the Global 450 Consortium (G450C). The G450C brings together Intel, TSMC, IBM, GlobalFoundries and Samsung in a cooperative venture to develop core process technologies that will allow them to migrate to volume production on the new wafer size. 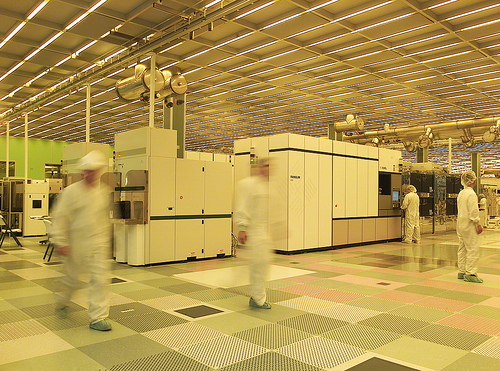 IBM is leading the G450C and already has 300mm manufacturing at East Fishkill, NY

The deal is yet another indication that many aspects of chip production are now too complex and too expensive for one company to advance on its own, even Intel. The consortium brings together competitors from three of the largest IDMs and the two main foundry groups (particularly given GlobalFoundries’ alignment with IBM and Samsung in the Common Platform). More importantly, the project—to be based in Albany, New York—has substantial cash behind it. G450C forms part of a $4.4B two-strand investment around an existing high-tech cluster, with $3.6B coming from IBM.

It is probably safe to assume that most of the funding will go toward the project’s main strand to develop the 14nm and 22nm nodes for the Common Platform, but it is nevertheless likely that at least several hundred million dollars will go toward 450mm. This, in itself, answers one of the main historical complaints from equipment suppliers that too much of the burden in early wafer size increases had been placed upon them—and in turn may explain why progress on 450mm stuttered until the beginning of this year.

With the G450C now funded, other players in the 450mm game feel more confident about mapping out a timeline for the new format and, according to EETimes, Luc van den Hove, president and CEO of Belgian research institute Imec, recently did just that.

Van den Hove added that he does not expect to see extreme ultraviolet (EUV) lithography equipment for production use at 450mm arriving until 2015. With Imec having been a key mover and shaker in EUV—and likely to remain so, whatever happens in Albany—that date is also important to note.

With designs now typically on a 6-12 month cycle, particularly for consumer electronics, the Imec timeline implies that most companies will go through a fair few projects at 300mm yet. However, the more pressing issue today concerns securing access to advanced wafer capacity—who will get parts on the 450mm lines first?

The move will more than double the number of die per wafer, offering a significant boost for margins (estimated by some, allowing for the inherent cost of a more expensive production process, at around 30%). Particularly for companies targeting very high volume applications, with consumer electronics and mobile computing immediately springing to mind, this looks like a wave to ride.

However, it is worth bearing in mind that the foundry industry continues to try to map capacity more closely to demand, with an eye to increasing its own historically thin margins. The excellent David Manners previewed the 450mm world in a recent blog post (http://bit.ly/oQzy0b), based on the latest research from UK analyst firm Future Horizons. It’s worth reading in full, but the headline observation has to be that foundry capex is actually going down (by about 19% this year) at a time when utilization remains on the rise, and even many companies with their own fabs have been outsourcing more and more manufacturing for devices aimed at 65nm and below.

The upshot is that the assumption that there will always be ample leading edge capacity, even at 300mm, looks increasingly dangerous. Going back to the original point about the need for forward planning, Manners suggests this model for the future:

“Buying capacity up front will become the new industry norm, eventually to be enhanced by up-front contributions to future capacity investment costs and effectively co-owning portions of the capacity—a kind of IDM-lite model.”

Interestingly enough, G450C currently includes only companies directly involved in the chipmaking process. This may not necessarily happen, but an intriguing next step would be for some of the fabless giants (e.g., Qualcomm, Broadcom, NVIDIA, Xilinx, Altera, etc.) to still more directly engage with the process development process. Indeed, some already are involved on a broad basis: Qualcomm inked a deal with the manufacturing research organization Sematech just less than 18 months ago.

Before managers have even had to start assessing the technological challenges inherent at 450mm, including the DFM implications of EUV, the design world is shifting from pay-for-capacity to a more ruthless pay-to-play model. The time to take 450mm seriously has—finally—arrived.

One Response to Plan for 450mm or pay the price