A look at some of the design and physical verification challenges of working with finFET and FD-SOI devices, including their impact on layout, DRC and LVS.

As the minimum dimension of planar transistors  has fallen below 90nm, their effectiveness as a true On/Off switch has been undermined by the increasing proximity of the source and drain at either end of the device channel. In such small devices, the length of the transistor’s conduction channel underneath the gate has become comparable to the width of the depletion layer around the source and drain regions, as shown.

Figure 1 A short-channel device's channel length is comparable to the depletion widths associated with the drain and source, so edge effects cannot be neglected

This creates a number of ‘short-channel’ effects, including:

– Threshold voltage roll-off: The threshold voltage of the device is reduced because the depletion regions of the source and drain intrude into the channel, change its effective geometry and therefore make it easier for current to flow from source to drain. The lowered threshold voltage makes it more difficult to turn the transistor fully Off, increasing its leakage current and therefore power consumption.

– Drain-induced barrier lowering (DIBL): As the source and drain get closer together, they become electrostatically coupled, such that the drain bias can affect the potential barrier to current flow at the source junction, increasing the threshold voltage roll-off, and hence the leakage.

– Charge mobility degradation: Atomistic effects such as surface scattering, velocity saturation, impact ionization, and hot-electron effects, reduce the mobility of both electron and hole charge carriers. Device architects have tried various ways to strain the crystal lattice of the channel to make it easier for charge carriers to flow through it, hence restoring its conductivity.

– Threshold voltage variation: This is due to statistical irregularities in dopant concentration, which become significant when the devices are so small.

Short-channel effects have negated many of the benefits of scaling transistors from 28nm to 20nm and have led to concerns about the economic viability of planar semiconductor processes at 20nm and below.

The industry has responded by suggesting two alternate device architectures, known as finFET and FD-SOI, that mitigate the effects. The finFET moves the channel out of the bulk silicon into a vertical fin and wraps it on three sides with a gate electrode, improving the electrostatic control of the channel. The silicon-on-insulator (SOI) transistor is a planar device whose channel is built in such a thin (shallow) silicon layer that the gate electrode can exercise full electrostatic control of the charge carriers in it.

FinFETs (Guide) are built as shown in this diagram.

The strong electrostatic control afforded by ensuring that the gate is close to all areas of the channel makes it easier to control the device’s threshold voltage, reducing leakage between source and drain, as well as making it possible to switch it more quickly.

FinFETs can be made on regular silicon wafers, or on SOI wafers, as shown.

Figure 3 FinFETs can be made on bulk silicon or on SOI wafers (Source: Synopsys)

Building finFETs on SOI is simpler than building them in bulk, because the etch process that forms the fin comes to a natural stop when it reaches the buried oxide layer of SOI, rather than having to be controlled by a timed etch process, subject to process variation, in bulk silicon. Building finFETs on SOI may also lead to more rectangular fins with more regular heights, since on bulk silicon the shallow trench isolation oxide that is necessary to insulate one fin from the next can’t be planarized, leading to variability in the height of the fin above the oxide.

The main manufacturing challenges for finFETs are:

Meeting these challenges requires new materials and more processing steps than used in bulk or SOI devices, making them more expensive to produce.

The fin’s thinness enables strong electrostatic control over the channel’s charge carriers, but limits the number of carriers and hence the channel’s drive strength. To overcome this problem, multiple fins can be connected in parallel, all driven by the same gate. The consequence of the finFET’s topology is that the choice of device width is restricted to multiples of Weff.

Benefits and risks of finFETs

Another way to control short-channel effects in deep submicron transistors is to make planar devices on SOI wafers, forming the channel in a thin silicon layer above the buried oxide. As discussed, the silicon layer is so thin that the gate can influence the whole channel and so completely shut off conduction.

In PD-SOI, the silicon film is 50nm to 90nm thick, so the gate’s influence cannot reach through the channel’s full depth, making the PD-SOI device behave like a slightly better bulk MOSFET.

In FD-SOI (Guide) the silicon film is 5nm to 20nm thick, so that the gate’s influence penetrates the full depth of the channel. The conduction channel doesn’t need to be doped, which eliminates a source of process variability, and the fact that it sits on an insulating layer means there is nowhere for unwanted current paths to form. This in turn relaxes the performance necessary from the gate, and so means that a thicker gate oxide can be used, reducing gate leakage. One advantage of FDSOI over finFETs is that it is possible to back-bias the channels through substrate contacts and so gain even greater control over the threshold voltage.

One drawback of FD-SOI is that it is harder to implement multiple Vt circuitry, which is useful for creating areas of higher-performance or lower-power devices, because it is not possible to alter the channel doping to affect the devices’ threshold voltage. Instead, the threshold voltage is controlled by tuning the gate-stack materials. However, a combination of doping and active biasing can be used to alter the threshold of a target group of transistors that have a common sub-oxide backplane. Another disadvantage of FD-SOI is that it is not possible to selectively strain the channel to improve carrier mobility.

Benefits and risks of FD-SOI

Early results suggest that the impact on digital design of using finFETs need not be that great if conservative approaches are taken. It should be possible to migrate circuits created for advanced planar processes to finFETs, using a lot of modeling and simulation to recheck the circuit performance.

One key difference between finFET-based design and that using conventional planar devices is that the freedom to choose the device’s drive strength is reduced as the drive strength can only be increased during layout by adding fins. The effective width of the device becomes quantized, and the quantization effect is worse for smaller transistors for which the next step up from the minimum-size device is one that is twice as wide.

In terms of optimization for power, the finFET provides circuit designers with the opportunity to trade leakage for switching speed and create fast/medium/slow versions of the base transistor.

DRC for finFETs implies fin-related checks – such as of fin width and fin-to-fin spacing – that are similar to regular planar checks. There are also a number of checks that are specific to finFET processes, such as checking that fins and poly are confined to regular, lithographically-friendly pitches in a fixed orientation.

A typical set of finFET physical verification rules contains the elements listed in Table 1 and illustrated in Figure 9:

RX and RXFIN are drawn layers. RX is drawn as in prior technologies except for some gridding constraints imposed by RXFIN.

Active portions must be surrounded by three dummies. This is enforced through the RXFIN_enclosure rules.

RXFIN_enclosure is a generated shape that encloses a region of fins with a common pitch. 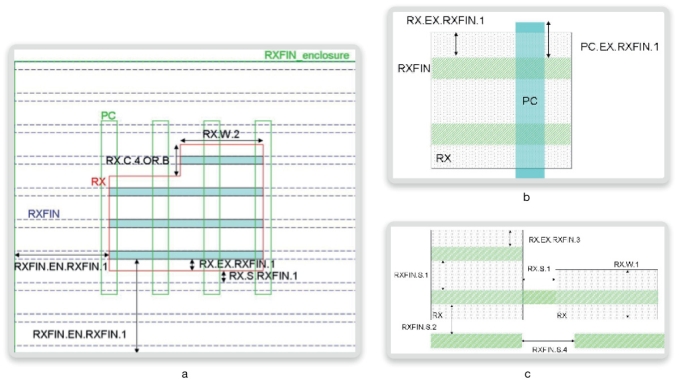 Device parameter extraction for finFETs is similar to planar devices, including the need to consider layout-dependent effects. Unlike planar devices, the key feature of gate width cannot be measured directly from the two-dimensional layout. The effective gate width depends on the fin height, the distance that the fin protrudes above the oxide surface. However, all the fins are the same height, so Hfin can be entered as a process  parameter and used to calculate effective device width, as before.

Another LVS concern for finFETs is the need to accurately extract the source/drain resistance, which forms a significant component of the transistor’s parasitic series resistance.

In principle, it is possible to directly port a cell library from a bulk process on to an FD-SOI process. However, the results will not be as good as dedicated cell libraries designed to take advantage of the different balance of capacitances in FD-SOI devices and the reduced variability of undoped channels.

The use of FD-SOI could have a significant impact on design if designers take up the opportunity to dynamically back-bias the channel, which gives better control over VT variability and so improves device switching speed.

Since FD-SOI is a planar technology, DRC and LVS checking is the same as for existing bulk technologies.

Short-channel effects severely limit the performance of bulk planar transistors at process nodes below 90nm.Two alternative devices are being proposed for process nodes below 20nm: finFETs and FD-SOI. Both are practical solutions that solve the major short-channel difficulties, both have been proven on real designs, and both are backed by major semiconductor companies. It is not yet clear which technology will predominate or if they will continue to co-exist.

(To read what attendees at the December 2012 International Electron Device Meeting felt about the relative merits of finFETs and FD-SOI in practice, click here.)

Marc Swinnen received a Master’s Degree in Electrical Engineering from the Catholic University of Leuven in Belgium and an MBA from San Jose State University. He has over 20 years of experience in Marketing and Technical Support at various EDA companies. Marc has been at Synopsys for 7 years, where he is Senior Product Marketing Manager working with IC Validator.

Ron Duncan is a Sr. Manager at Synopsys in Mountain View, CA.  His team supports IC Validator and PrimeYield. Ron has worked at Hewlett Packard, ISS and Avant!, prior to Synopsys. His semiconductor and EDA experience spans physical design and verification, circuit simulation, device design, mask synthesis, TCAD and semiconductor manufacturing.  He holds electrical engineering degrees from MIT and Cornell.

Dr Walden Rhines, chairman and CEO of Mentor Graphics, opens a two-part analysis by looking back at the dominant design and business trends in 2015.