Anders Nordstrom is a senior corporate applications engineer in Synopsys’ Verification Group working on formal methodology and features on the VC Formal tool. He has 20 years’ experience in assertion-based verification and formal property verification, in EDA and as a verification engineer.

In this context, comparing a design to itself doesn’t sound very useful because the reference and design under test (DUT) is the same. However, using sequential equivalence checking (SEQ) this can be a very meaningful and important test because it can find issues caused by unknown values that would otherwise be caught much later by gate-level simulations.

Figure 1 Comparing a design before and after insertion of clock gating (Source: Synopsys)

A sequential equivalence tool verifies that the outputs of a module or SoC are the same on every clock cycle, given that the inputs are the same. The behavior between clock edges may be different as long as the outputs are the same at the clock edge. This is different from Boolean equivalence checking, where the logic driving outputs and flip flops have to be functionally equivalent. Conceptually it is like the difference between a cycle-based simulator and an event-based simulator.

Other examples of applications of SEQ includes retiming changes and functional changes that don’t alter the output behavior – but these also include two different versions of the design.

What else can I verify by proving sequential equivalence between two copies of the same design, when there are no changes between the two versions?

For a comparison to be useful there must be differences in the two copies of the same design. As we’ll see, there actually may be real functional differences. If the design has uninitialized registers, i.e. registers with unknown values, this means that the registers may end up with different values after reset since they are not constrained. Now you suddenly have two different designs, since they are in different states, and this may lead to functional differences.

Other causes of failures due to unknown values are explicit X assignments in the RTL and array-bound violations. If sigB has a value greater than 3 in the code below, the assignment to memOut is unknown because the memory memA is addressed outside the defined range.

If this unknown value propagates to an output, we’ll see a difference between the two copies of the design since the formal tool may assign different values to memOut in the two cases and the proof fails. This is also the case with explicit X assignments in the RTL. Assignments of variables in the RTL to X allow the synthesis tool to optimize the code, and if the code is un-reachable or an arbitrary value does not affect the output of a module, everything is fine. However, if the X assignment leads to different output values in the two copies of the design, we may see functional failures in the chip.

In simulation, this can be verified by enabling X propagation in the RTL simulator or by running gate-level simulations. The advantage of using formal tools is that they exhaustively check all cases.

For example, if the register “Reg” in the figure below is not initialized, it will be X or unknown. This means that the formal tool may assign it any value, i.e. it may take the value “1” in the first copy and “0” in the second copy of the design. This means that the logic that affects the output “OUT1” in the two cases is different. If other logic prevents the value of “Reg” affecting the value of the output, it is safe to leave the register un-initialized. However, if the outputs are different there is a problem since the random reset state leads to different behaviors in the two copies, and hence, the output value is not deterministic. 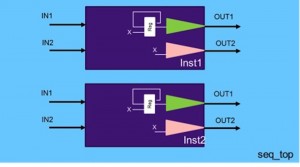 Comparing a design to itself using formal-based sequential equivalence checking is a powerful way to detect X propagation caused by un-initialized registers. SEQ verifies partial reset designs by proving that X cannot reach outputs. If not caught, this situation may lead to intermittent incorrect behavior, and may also violate security and safety properties of the design. These are only two examples where equivalence checking is critical – there are of course many more.