If you haven’t heard about the lithography challenges facing manufacturing at ever-shrinking process nodes, you must have been living in a cave. Since 90nm, manufacturers have been using 193nm lithography. As process nodes have advanced to 65 to 45 to 28, and now to 20 and 16nm, the corresponding transistor sizes and interconnects have shrunk as well. But the light source has remained at 193nm (Figure 1).

High fidelity silicon manufacturing at process node shrinks with ever deeper sub-wavelength features is akin to painting a thin, extremely precise line using a very wide brush. During lithography, the contoured shapes of the actual silicon printed on the chip are not the same as the perfectly rectilinear shapes drawn by design tools. The shapes of the contours vary depending on such factors as process conditions and the lithographic influence of neighboring geometries. What you draw is not exactly what you get (Figure 2).

The EDA industry first introduced a number of technologies to sustain successful lithographic resolution. These included simple rule-based optical process correction (OPC), model-based OPC, and sub-resolution assist features (SRAF). Foundries applied them to a design after tapeout. But at 65/45nm, it became apparent that lithographic variation could no longer be fully addressed post-tapeout using OPC.

This led to the introduction of early lithographic simulation during the intellectual property (IP) and chip design phases. This generation of tools has been commonly grouped together under the concept of ‘litho-friendly design’ (LFD). LFD allows design teams to find and correct lithographic ‘hotspots’ before tapeout.

However from 20nm, another generation of enabling technology has become necessary. Design features are now so small and the designs themselves so tightly spaced that bringing them together in a single lithographic resolution has become impossible. Double patterning has therefore already become mandatory to enable design production at 20nm. Below that, foundries are evaluating other multi-patterning strategies (e.g., triple and quadruple patterning).

Multi-patterning ‘splits’ the layout into two or more separate masks. This allows foundries to image a design using separate exposures for each mask while still drawing upon established OPC solutions (Figure 3). By splitting a layer onto multiple masks, manufacturers can squeeze more and finer geometries into a smaller space. 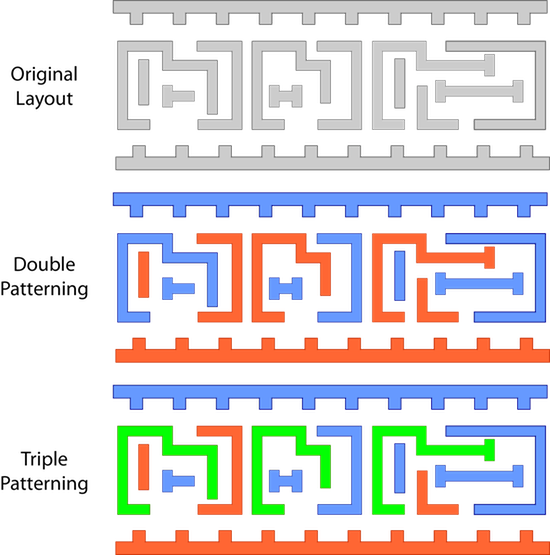 Moreover, multi-patterning potentially leads to additional variation due to the overlay (misalignment) of the merged masks. Depending on alignment of the masks, you may see pinching hotspots (narrowing of wires) or bridging hotspots (not enough space). So, a lithography verification tool must be able to analyze not only the geometries on the same color mask, but also the different color masks of the merged contours (Figure 4).

Figure 4 Simulations must analyze both a single color mask and the merged results of multiple masks to identify all potential hotspots (Source: Mentor Graphics)

To ensure full and accurate coverage, sign-off lithography verification must be able to support:

Introducing multi-patterning requirements into the design and verification flow is causing a major shift in the responsibilities facing design teams. Unless and until new technology arrives to replace 193nm scanners, you must have the tools and technologies to verify the lithographic fidelity of multi-patterned designs to achieve timely tapeouts and success in manufacturing.

Joe Kwan is the Product Marketing Manager for Calibre LFD and Calibre DFM Services at Mentor Graphics. He previously worked at VLSI Technology, COMPASS Design Automation, and Virtual Silicon. Joe received a BA in Computer Science from the University of California, Berkeley, and an MS in Electrical Engineering from Stanford University.