The Omega2 STMicroelectronics chip (Figure 1) discussed in this case study is a member of a family of HD set-top box decoders that integrate an MPEG-4 decoder. The SoC is implemented in a 65nm process that is then shrunk to 55nm. It contains 4.5M instances (18M gates), 311 macros, three CPU hard cores and 640 I/Os. 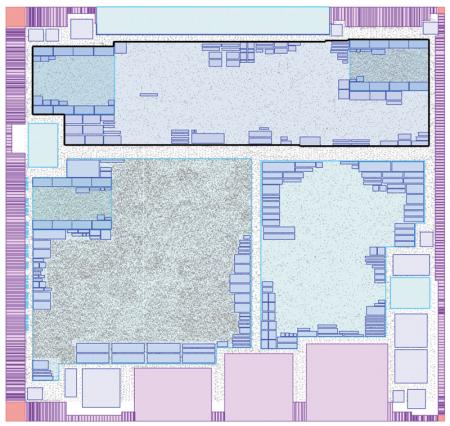 The top-level SoC physical hierarchy consists of three partitions and 360 functional pads. There are 125 clock domains. For design closure, there were four operating modes, each with three process corners. The main challenges in realizing the design centered on improving the design closure process without sacrificing chip performance.

Our existing flow imposed a hierarchical timing closure methodology in which the chip was partitioned, and then the partitions were implemented and instantiated at the chip level as abstraction models for top-level timing sign-off. Using block abstractions at the chip level proved to be inefficient for converging on timing closure. It took many traditional ECO iterations to fix timing violations on inter-block paths, and that was especially true for this design because of the number of mode/corner combinations we had to close.

We wanted to optimize the full chip in a flat mode as opposed to a hierarchical one. We also wanted to optimize for all the mode/corner combinations required for sign-off. Because of the huge design size, we had not been able to visualize the timing of the full chip flat in a physical design environment. This meant that we were also leaving some performance untapped because we were forced to accept wider timing margins.

One problem with our previous top-level timing closure process had been that timing models used during chip optimization were not accurate enough to close chip-level timing. We had to rely on pessimistic timing budgets allocated during chip budgeting, which often caused I/O and inter-partition timing violations. Also due to the timing models, chip-level clock tree synthesis could not be done flat to meet very precise skew and latency targets. It required iteration during the timing closure phase.

Handling MCMM timing in our flow was also a challenge. The block implementations were done for best case/worst case timing in two modes, but sign-off timing had to be met for several other modes and four corners. Therefore, we usually found some ‘cross corner’ or ‘cross mode’ violations during sign off that were not seen during the implementation. We could fix these by undertaking ECOs, but this was obviously expensive from a schedule perspective.

In our previous flow, full chip static timing analysis (STA) required a separate extraction run for each of the four design corners, then an analysis would be run for each mode/corner combination. The timing results were manually analyzed and fixed in each partition, and checked with chip-level STA. We then performed full extractions again and re-analyzed. We often found that fixing a violation in one timing scenario would cause a new timing violation in another. It sometimes took several iterations, the efforts of multiple engineers, and several weeks to close timing under this iterative method.

Toward a new design flow

We needed a way of improving the MCMM closure, allowing full-chip optimization, and performing the chip assembly that incurred fewer sign-off iterations and expended fewer resources. We turned to the Mentor Graphics Olympus-SoC place and route system.

Because the project had already started, we needed something that would cause the least disruption to the existing methodology. To minimize the risk associated with changing the design flow completely, we adopted Olympus-SoC to assist in the specific areas of chip-level assembly, MCMM optimization, timing closure and chip finishing.

The software uses industry standard input and output formats (e.g., LEF, DEF, Verilog), so we were able to use in-house libraries that were already part of our design kits. We had no problem reading in the block/partition DEF and Verilog files and in viewing the entire chip in a single flat representation.

We performed timing correlation between our sign-off tool and Olympus-SoC and the results showed a very close match, with Olympus within 10% of the sign-off reference slack calculations. Figures 2a and 2b show the best case and worst case timing correlation graphs.

Olympus-SoC was able to load and process our full 18M-gate design flat, while maintaining the design’s logical hierarchy. We liked the fact that timing modeling of partitions/blocks was not a requirement for chip assembly. We need the freedom to choose which blocks to abstract, depending on the top-level paths and the level of accuracy needed. For example, we might abstract a block that is cloned heavily, while a block that is not cloned does not need to be abstracted giving us greater accuracy in chip-level timing measurements. This is particularly important when optimizing inter-block paths because the tool can see the entire path end-to-end. Figure 3 shows the chip with an inter-block path highlighted. 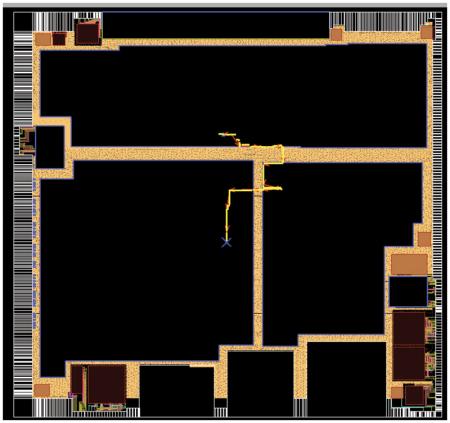 Olympus-SoC allowed us to optimize the design at the top level (including I/Os) and at the block level at the same time, full flat.  Because the block-level boundaries were maintained, any optimization-logic changes made to the blocks during flat optimization were directly updated inside the blocks. This type of dynamic update is only possible in situ with a tool that has the capacity to support a flat full-chip view. Figure 4 (p. 38) shows the Olympus-SoC capability to optimize partition to I/O paths. 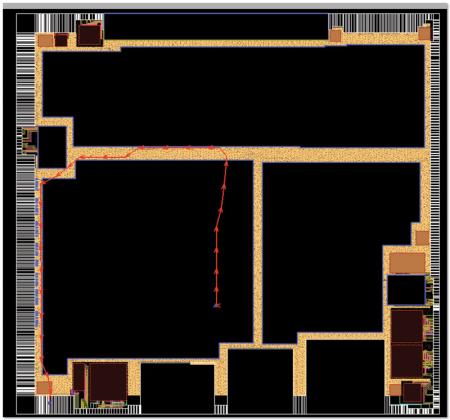 For the MCMM optimization, we set up the mode-corner combinations information at the beginning, and the tool quite smoothly and automatically optimized all the relevant scenarios. 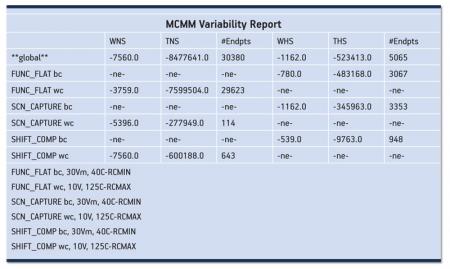 We then ran full chip optimization in Olympus-SoC, performed a single extraction that covered all four corners, and analyzed the results in the sign-off timer. All ECOs were done in a full-flat context in Olympus-SoC, followed by a single re-extraction and re-analysis. This flow gave better optimization results, particularly for inter-partition (or inter-block) paths, and greatly reduced the number of timing ECO cycles to achieve full-chip closure.

The total number of ECO iterations needed with Olympus-SoC was significantly less than with our previous flow. Table 2 shows the variability report generated after the last top-level optimization. It shows the same metrics as before for six different variability scenarios. After closing the timing, we used Olympus-SoC for chip finishing and final streamout of the GDSII. 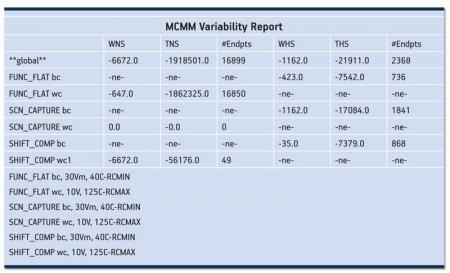 We derived significant benefits from our use of Olympus-SoC in the flow for the Omega2. However, the introduction of any new tool into a flow always presents some challenges. For example:

The use of Olympus-SoC for full-chip optimization and chip finishing gave us significant improvements compared to our previous approach to timing closure. It was easy to set up, and the correlation with the sign-off timing tool was good. Because of its high capacity, relatively small memory footprint, MCMM timing closure capability, efficient multithreading and accuracy, we reduced timing closure on the Omega2 from two weeks to less than three days. Notably, we saved time during sign-off by being in a position to run full-chip, MCMM optimization that significantly reduced the number of ECO iterations.

Given our experience with Olympus-SoC on our HD set-top box decoder, we plan to use this tool extensively for futures designs.

The authors wish to recognize the contributions made to this project by their colleagues at STMicroelectronics, Vivek Sinha, Sachin Mathur, Suman Gupta, Azad Singh, Mohit Verma and Deepak Garg, and by Mentor Graphics’ Ajay Mishra.

The demands of manufacturing closure at advanced process nodes make the traditional design-then-fix flow unmanageable. At 28nm and below, designers need a solution that can address manufacturing issues at any point in the design process, enabling a true correct-by-construction methodology. An effective solution must provide design-rule-check and design-for-manufacturing analysis using the actual foundry-approved signoff rules and engines, integrated directly with the place and route system. It must also provide automated repair and re-verification to ensure that all fixes are signoff clean without lengthy and non-convergent manual fixing. Finally, the router must be able to optimize for timing, power, signal integrity and die size at the same time as it is observing manufacturing constraints. This requires concurrent MCMM capability that can handle an unlimited number of scenarios within the router, in addition to tight integration with the signoff checking engines. Such an integrated design and verification solution is described in the following article. It is our contention that this strategy eliminates the traditional design-then-fix iterations required today, cuts time-to-manufacturing-signoff and reduces overall development costs and effort. Using a signoff-driven design approach, the traditional manufacturing closure process that typically takes weeks or months can be reduced to days.