Morris Chang was in on the ground floor of IC innovation at TI and remains there today as chairman of TSMC. Paul Dempsey reports. 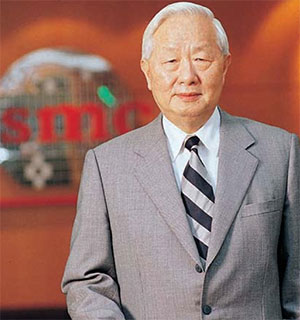 When TSMC arrived on the scene as one of the first chip foundries in 1987, few people thought that its sector would ever come to represent the cutting edge of semiconductor technology. ‘Real men’ owned their own fabs back then. If you wanted to be a player, you were an IDM—an abbreviation still so well understood in this business that you don’t have to spell it out. Mind you, these days you don’t have to spell out Taiwan Semiconductor Manufacturing Company either.

We all know what has happened. First, TSMC rode a wave of innovation out of the fabless sector, largely driven by graphics and mobile comms chips as well as FPGAs. It gave the smartest start-ups a way to get products out in volume without facing capital calls from internal manufacturing. More recently, though, even the one-time IDMs have gradually come to work with foundries. Such ‘fablite’ companies—Texas Instruments and Freescale Semiconductors, among them—may still have some of their own older capacity, but the cost of developing the most advanced processes is now so great that they will happily use a third-party supplier.

Making chips has become a phenomenally cash-draining business. Construction began on TSMC’s latest site, Fab 15, in July. It is expected to cost around NT$300bn (£9.75bn)—and that does not include the hugely expensive R&D necessary to develop processes for the advanced 40nm, 28nm and lower nodes that the factory will run on high-capacity 12-inch silicon wafers.

The man running TSMC today as chairman and CEO is Dr. Morris Chang, one of its leading founders. He believes the company has always had a logical—if not easy—sell on its hands. “We haven’t needed to become persuasive salesmen,” he says. “You don’t convince anyone to go to a foundry. They have to realize it for themselves. I wait for them to come to me.”

It is easy to see how this worked for fabless companies, TSMC star clients such as Qualcomm, Broadcom and Nvidia. But among the IDMs, Chang and colleagues had to play a more patient game.

“Take TI as an example,” says Chang. “They stayed with hardware manufacturing for a long, long time—they didn’t want to give it up. They did pretty much give it up though when they couldn’t afford to do it anymore. Or while they could afford the R&D perhaps, they found that when they started to make chips based on it, they couldn’t price them competitively.”

There is good cause to paint Chang as a semiconductor visionary. He left China to study in the USA in 1949 and joined TI in the mid-1950s where he worked with Jack Kilby, inventor of the integrated circuit. Chang rose to head TI’s global chip operations before leaving in the early 1980s to run General Instrument. He later established TSMC after returning to run Taiwan’s state research organization ITRI. Chang is thus one of the few ‘ground floor’ IC pioneers still in a senior executive role with a major technology company.

Then there is TSMC’s actual performance. It produced the equivalent of just under 10 million eight-inch chip wafers last year and its sales are almost as much as those of all the other foundries combined. In terms of sheer output, the company is on a par with Intel, which concentrates on microprocessors, and Samsung, which focuses on memories.

“We think we are now pretty much like oil—and everybody needs oil,” says Chang. “Now, you might think there’s nothing glamorous about the oil companies, but they get their value-add every day.”

At the same time, TSMC has faced some challenges of late and Chang only returned to the CEO role and day-to-day management of the company last year, after having stepped down from it in 2005. The company had problems implementing its 40nm process at its existing ‘gigafabs’ and now faces a noisy, ambitious rival in Globalfoundries, which is backed by Abu Dhabi’s ATIC technology investment vehicle.

With his company having outlined in February how it was addressing the 40nm issue, part of the agenda now seems to cast Dr. Chang as its answer to Joe Torre, the esteemed architect of success who stands firm before an emerging rival.

Another challenge may meanwhile be on the horizon in Europe. There is renewed debate about creating some kind of ‘Eurofoundry’, possibly with EU backing, after the unraveling of the France-based Crolles Alliance into semiconductor manufacturing research. It brought together leading chip companies from the continent and elsewhere, including the USA.

To that end, the nanoelectronics strand of the European Commission’s Framework Programme 7 this summer commissioned a report on ‘Benefits and measures to set up 450mm [i.e. 18-inch] semiconductor prototyping and to keep semiconductor manufacturing in Europe—the role of public authorities and programmes’.

And this concern is not confined to the EU. In the U.S. too, there is talk once more that government may need to step in to help shore up local ‘advanced manufacturing’. Not surprisingly, Chang has a robust view.

“If you want to say that the foundry industry is concentrated in Asia, or that semiconductor manufacturing generally is focused there if you add Samsung, then, yes, Korea and Taiwan are playing big roles and China also will eventually. But my view is that you’re looking at the wrong thing,” says Chang.

“I draw a parallel with Japan. It has also worried about maintaining a semiconductor manufacturing base for the last 20 or 30 years. But what have they gained from that? Nothing. In fact, you could say they lost.”

He points out that 30 years ago, Japan’s share of the global chip market stood at 50% while the USA claimed 30%. Today, those shares have in broad terms been reversed. “In the same time, the share taken by fabless companies has gone from zero to roughly 20% and most—not all, but most—fabless companies are from the U.S. So what the U.S. has gained and what Japan has lost could be almost entirely attributed to fabless companies. What enabled that? Foundries,” says Chang.

The TSMC chief professes himself optimistic for the future of the semiconductor business. Given its alliances with so many key silicon companies, the company has become an important bellwether. “I don’t think this cycle has been fundamentally different from any others in the industry, except in terms of its degree,” says Chang. “The plunge was very steep and very quick—it took about three months. Then the surge was steep as well—but it again took three months.

“If you take 100 as the base, things dropped to 30 or 40 very suddenly, but then demand shot up to 200 just as fast. So it was severe, but it was also over very quickly. Six months and we were through it.”

In the near term, Chang expects the current fourth quarter and the first quarter of 2011 to represent a dip. “But that’s again always how it works. It’s fundamentally seasonal, in that the second and third quarters are strong, followed by a weaker fourth and first.”

In the longer term, Chang is looking to build TSMC’s role in green products. In part, this has been reflected by an increasing focus on low power processes and design services for its core chip business. However, the company has also been building a role as a manufacturer of solar cells and LED lighting. “These are investments in the hundreds of millions of dollars, so they’re some way below the billions we have to invest in fabs,” says Chang. “But green technologies are going to be important.”

Fundamentally, though, his optimism expresses itself in technological terms, particularly the drive to smaller production processes. “We haven’t started to invest in 20nm [production] yet. Our investments so far and next year have and will be devoted to 28nm, 40nm and 65nm—the technologies that we know will work,” Chang says.

“But if you ask me how far will Moore’s Law go and will TSMC be there? Well, Intel will try to extend Moore’s Law as much as possible. Samsung will probably try for DRAM and Flash so they can leave their competitors as far behind as possible. But the main thing is that if Intel’s there, we’ll be there.”

Given Chang’s and TSMC’s records to date, you certainly wouldn’t doubt that forecast.