Justin Rattner will this year mark 35 years with Intel. His career with the technology giant has seen him collect numerous accolades, particularly for work in areas such as high performance computing (HPC). He was Intel’s first principal engineer and was its fourth member of staff to be named a fellow (he is today a senior fellow). Elsewhere, he has received such plaudits as Scientist of the Year from R&D Magazine. 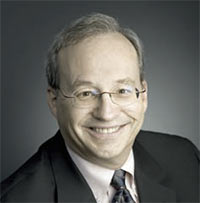 More recently, Rattner became only the second person to hold the post of chief technology officer at Intel. He considers himself privileged to be able to look out across the next five or ten years and investigate technologies on the horizon. Given the R&D resources at his disposal, it is hard not to feel jealous.

So, having him as one of the keynote speakers at this year’s Design Automation Conference (DAC) is quite a catch. At the same time, Rattner sees DAC as an opportunity to highlight ongoing research within Intel to which he hopes the EDA community can contribute. His presentation, “EDA for Digital, Programmable, Multi-Radios” will largely address an already fast-moving aspect of electronic system design rather than one appearing on the horizon—the translation of analog circuitry into the digital domain.

The meatier stuff must wait on the speech itself, but Rattner’s description of how Intel got to where it stands regarding this other form of A-to-D is in itself very revealing. “We were conducting radio research primarily in the analog domain, but we came to a point where we realized that it was unlikely that Intel would ever set the highest performance and deliver the highest quality if we carried on down that road. It’s not in our DNA,” explains Rattner.

“So, the research team stepped back, looked at what actually is in our nature and said, ‘OK, let’s carry on with the radio research, but now trying to get the highest performance by using digital as much as possible.’ That has led us down an avenue where—on both the transmit and the receive sides—it looks like you can build a radio that is mostly digital, save for one or two analog elements. We’re not talking about just a soft radio here, but all the way from the antenna to the MAC and back. And another thing that happens when you adopt this perspective, is that you realize that you’re now dealing with computational problems rather than simply circuit design problems.”

Justin Rattner’s history with Intel includes a long stint as one of the key members of its high performance computing (HPC) team. As such, he encountered the challenges inherent in issues such as parallelism and writing software for multicore systems long before they became common concerns. “We have got a history here and a lot of knowhow that we built up from HPC, but it’s still a big challenge. It isn’t all HPC-driven,” says Rattner.

“There’s not a lot of experience out there among developers, people are not familiar with the tools and there’s been very little training, particularly at the academic level, until the last two years. So, right now, we’re probably putting more money into software research into parallelism than into hardware research into it. Interconnecting a bunch of processors is not nearly as difficult as programming that collection of processors.”

Intel has been developing a series of new tools to aid the challenge, feeding them out for developer review via its experimental Web site—http://whatif.intel.com. “One tool that we have had out there is a software-based transactional memory version of C/C++—that’s had a very good response so far,” says Rattner. “We’ve got another C dialect, CT with the ‘T’ for throughput, which has a very powerful vector abstraction—it’s basically a high level source for writing data parallel programs. That has so far only gone out to a limited group of users, but we will make it publicly available later in the year.”

Rattner says that he expects development tools and projects to coalesce around suitable application domains. “We’ve identified three broad classes. The first is recognition problems. The second is data mining problems. And the third is synthesis—both in the literal sense of, say, creating images, or in the more virtual sense where you are doing a kind of modeling that is predictive in nature,” says Rattner.

Intel has already begun to build some ‘non-production’ applications in these fields as it tries to identify appropriate techniques for algorithms, data structures and recomposition. “We’re working with that type of problem, looking at the higher level algorithmic issues and the lower level detailed mathematical techniques that get involved—some of which are statistic in their nature—and from those you can create things that can be programmed,” says Rattner. “We’ve got our first results and there will be more things becoming public in the next few months.”

There is then the aspect of identifying the nature of the overall radio system that the market requires. This takes the challenge from one of simply radio design to the ‘multiradio’ concept Rattner will expand upon at DAC.

“We’re looking at things from the platform level, particularly with regard to future mobile devices, whether they’re cell phones, smartphones, laptops and MacBooks, or something else,” says Rattner. “What all these devices have in common is that they already have multiple radios—so when you set power, area and other benchmarks, you might do so today on the basis of probably three radios, but we’re fast moving towards, four, five, more than that. You have Bluetooth, Wi-Fi, GPS, near-field, and then WIMAX and LTE, and that’s not all of them. They just seem to go on forever.” “The traditional approach goes, ‘OK, we’ll stack up these radios and then pray for some antenna space.’ However, what we’re now looking at is this multi-radio approach where the entire send and receive chain is engineered so that it can be switched and reconfi gured very quickly.”

Such an objective requires very agile techniques for changing frequency. It also, with regard to the baseband, demands a capability to reconfi gure arithmetic elements on the fly so that devices can shift from one radio protocol to another seamlessly and run multiple protocols simultaneously. “If you are going to have seamless hand-off from one protocol to another, it’s pretty much inevitable that you must have both running at the same time,” says Rattner. “But it isn’t just about that—it’s about what people want from their devices. Right now on my Blackberry, it’s frustrating that as soon as I take a voice call, I stop getting e-mail. Then when the call ends, there’s this fl ood of e-mail. Well, that’s not convenient anyway, but what about the times when you might want to send an e-mail during a call or a Web link? It’s happened to me—I think it happens to a lot of people.” The work Intel has done on multi-radio is well advanced.

Some aspects have already been published, but not all. More pertinently, Rattner says that a demonstration of its heavily digital approach could take place before the end of the year. “We’re not looking at something that’s 5 or 10 years away,” he says. “We’re building this stuff on today’s processes—so we’re talking 45nm—and as for commercial production, you can never be 100% sure but you’re probably looking at 2011. We’d expect to see this at 32nm.”

Also, as Intel looks to commercialize its multi-radio strategy, it is beginning to identify some further indicators in terms of the transition of analog circuitry into the digital realm. One important one is that the crossover point where digital strategies deliver major cost and performance efficiencies over analog-led designs is settling at about three radios and upwards. Given the functionality demanded of mobile products, the fruits from what Rattner calls “looking at old problems from new perspectives” could prove very timely.

Another interesting digital-to-analog shift lies in technology Intel demonstrated in April at its Shanghai developer forum, in the arena of computational photography. “It’s interesting because it shows the way thinking works when you look at these boundaries between digital and analog,” says Rattner.

Such disruptive thinking, present here and elsewhere on the company’s research agenda, has a solid commercial aspect. Intel did not get to be Intel without shrewd husbandry of the bottom line.

“We’re not so naïve as to believe that the PC business will continue to grow and ensure the financial health of the company,” says Rattner. “The market is definitely changing. PC growth worldwide is not what it was five years ago. There’s been a dramatic reduction—so dramatic that if you take it in isolation, there’s no longer enough there for Intel itself to be considered a growth company. And that’s quite a change. But it also means that there’s this tremendous interest—and not just on the business side but increasingly evident on the research and technology side—in taking the company into new areas.”

Justin Rattner’s DAC keynote takes place in the opening session starting at 8:30am on Tuesday, June 10 in Ballroom ABC at the Anaheim Convention Center.