Mentor Graphics has spent much of the last two years extending the capabilities of its Xpedition PCB software along the lines of a chip-to-package-to-board design flow. It was inevitable once that work was complete, the company would turn to address the other side of the process, the growing challenges raised by multi-board designs as systems of systems (SoS) proliferate.

The formal announcement came a few weeks ago and we have just had a chance to sit down and discuss the innovations with Dave Wiens, Product Marketing Manager in Mentor’s Systems Design Division.

Xpedition has been extended with capabilities aimed at not only the system architect and the PCB designers working from his direction but also into areas such as cabling, manufacturability and more. Wiens describes the process as one of “both integration and automation”.

On one level, Mentor is bringing a clutch of existing products still closer together. In cabling it has the well established Capital software. In manufacturing, it has Valor. SystemVision is another recognized play but more on the mechatronics side. All of these – and more – make key contributions to the Xpedition SoS flow.

But there has also been a clear attempt to address an emerging SoS market that is not merely straining but has arguably already breached the capacity of traditional methodologies.

“We’ve been designing systems for generations but it’s become a question of scale,” says Wiens. “When you are talking about a motherboard and a daughterboard and basically that’s it, the challenges in cross-domain collaboration are not that great. But when, as we’re seeing now, you’re talking about 10 or 20 or 100 boards within a single system that really ups the complexity – and, on top of that, the relationships that can cause problems aren’t simply electronic but they do stretch into the mechanical, cabling and all sorts of fun things.”

Figure 1. The multi-board evolution of systems of systems (Mentor Graphics)

Nevertheless, you can take the traditional architect-PCB designer relationship, and how Mentor is looking to improve that, as a good example of the philosophy at work.

“At the architectural level, these guys don’t want complicated tools. They’ve only just graduated from paper and they’re still using fairly straightforward software. They might be using [Microsoft] Visio as a drawing tool (some even use PowerPoint) and those have limited intelligence within them in terms of how you manipulate the object,” says Wiens.

“Similarly, when it comes to defining connectivity between the boards, they generally use an Excel spreadsheet. ‘Pin 1 on Board 1 maps to Pin 5 on Board 2, and here’s the signal.’ And so it goes on pin by pin. Again, not a lot of complexity where you have two boards; it’s maybe not such a big deal to handle an ECO. But when you have tens of thousands of connections in these systems, it becomes a pain just finding the first one, never mind making changes to it.”

So capture a clearer system definition from the outset and there are clear opportunities through integration and automation to save plenty of time and heartache, speeding up the handoff to the PCB design team.

“But then you see a further level of problems,” says Wiens. “Because [architect-to-designer] tends to be a one-way traffic. There’s little basis for communication back and forth between them. So, errors occur or, where there may be chances to optimize, they aren’t taken because nobody wants to take the risk.”

The extended Xpedition addresses this example head on. There is integrated communication when design changes are made so that they are flagged for all relevant approvals. “So, less automation here, for good reasons, but still the emphasis on integration,” says Wiens. “And importantly, you open the chances for closer collaboration.”

Here’s another example, but this time for cabling. “You might just want a ribbon cable in some instances, but what if you’re talking about 25Gbit/s communication. Now the architect needs to be able to clearly indicate constraints to the cable designer – that cable had better be differential pair, well shielded and so on,” says Wiens.

“By integrating all these system design environments, you’re making sure those messages get through clearly and quickly.”

And you also get into another of today’s hotter areas: multi-disciplinary design 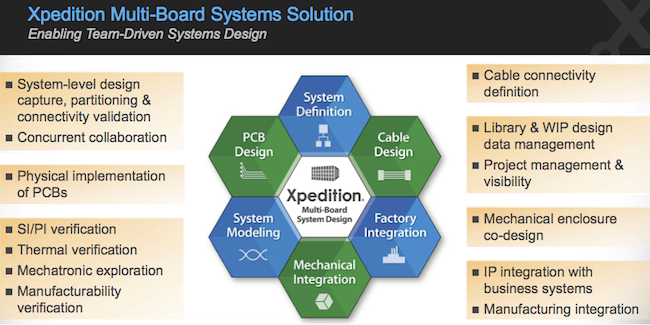 It’s all very practical stuff, but where will Xpedition go next. “We do want to do more on the architectural side, breaking down the abstractions there – concept development, features, functions, and system decomposition,” says Wiens.

But then there is also the question of Siemens’ recent recommended bid for Mentor and its impact.

“Obviously where we are going with Xpedition brings us closer to that PLM and factory area where Siemens is a massive player,” says Wiens.

“We have already got neutral formats that pass data into their software, but also those of other players like PTC and that will continue. But, if you look at what we’ve done now with Xpedition – a lot of this draws upon technology that is already within Mentor (Valor, Capital and so on). It’s not strange to say then that the level of integration that takes place around in-house technology is always going to be greater. And, looking at what will happen if everything goes through to plan with Siemens, you can draw some pretty ‘safe’ conclusions from that.”

This second part looks at Mentor's views on flow neutrality, how DRS360 was born, machine learning and the threat from embedded Trojans.