Assertions are already used in pre-silicon verification and can help halve debug time. So why not synthesize assertions into real logic gates in the final silicon, to catch those unexpected bugs that make validation so much harder? Here’s how.

Performing verification on real silicon introduces new challenges. On the one hand, real silicon offers great execution speed, which enables long test runs that reach deep into the design’s state-space. On the other hand, real silicon lacks both good controllability and observability, which serve an important role in pre-silicon verification. Assertions can address both the controllability and observability challenges associated with pre-silicon verification, for example in RTL simulation. There is emerging interest in using assertions to address these challenges in post-silicon validation as well.

Before we explore how this works, we need to define controllability and observability.

Observability refers to the ability to observe the effects of a specific internal finite state machine, structure, or stimulated logic element. For example, a testbench generally has limited observability if it can only observe the external ports of the design model.

To identify a design error, the following conditions must occur:

1. The testbench must generate the proper input stimulus to activate a design error.

2. That input stimulus must propagate all effects resulting from the design error to an observable output port.

It is possible to set up a condition where the input stimulus activates a design error that does not propagate to an observable output port. In these cases, the first condition applies; however, the second condition is absent, as illustrated in Figure 1. 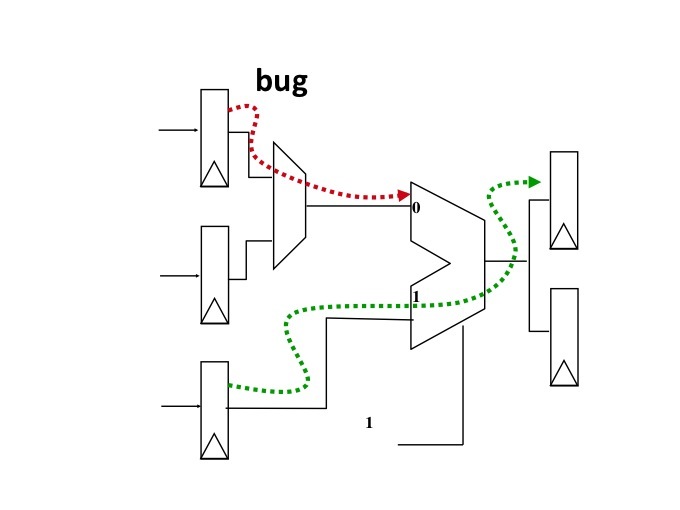 Embedding assertions in the RTL model increases observability, because the simulation testbench no longer depends on generating input stimulus to propagate a design error to an observable output port. The approach means that improper or unexpected behavior can be caught closer to the source of the design error, in terms of both time and location. It also cuts debugging time by up to 50%, according to case studies. In addition, embedded assertions can identify complex bugs in the design that never propagated to the output ports due to limited simulation run times, and therefore, were never detected by the simulation testbench.

If assertions can help you overcome problems with testbench observability and controllability in pre-silicon verification, why not also use them in post-silicon validation? Coverage properties, which are a form of assertion looking for desirable behavior, can be used to identify controllability issues resulting from either a poor simulation testbench or a poor test that is applied to the actual silicon during post-silicon validation.

The theory and process of synthesizing efficient hardware checkers from SystemVerilog or PSL assertions is fairly mature and is well covered in the book Generating Hardware Assertion Checkers: For Hardware Verification, Emulation, Post-Fabrication Debugging and On-Line Monitoring.[3]

One problem identified during a workshop on post-silicon debugging at DAC 2012 dealt with the number of proprietary methods currently being used to address the issues above. Ultimately, industry standards and recommended best practices must emerge to foster broader industry adoption of synthesizing hardware assertions.

For example, the challenge in addressing the first issue is to identify a useful set of assertions for areas of the design that might contain a bug. This is not trivial since, by definition, the bugs you want to find are the ones you didn’t think of. At the same time, though, no one wants to waste silicon real estate by synthesizing hardware assertions that provide little value.

One way some companies are addressing this problem is to implement a reconfigurable fabric into the SoC, which enables assertion checkers and coverage monitors to be programmed as needed. With this approach, the post-silicon validation engineer can change the observability focus during the debugging stage without committing to a fixed set of assertions identified prior to synthesis.

For the second issue, that is, obtaining the pass-fail status from the assertion, various techniques are currently being used, ranging from:

For the third issue, that is, providing a standard set of enable/disable controls across multiple hardware assertions, the scan channel can also be used to control reconfiguration and to load the assertion bitstream data into the programmable fabric.

Hardware assertions and coverage properties are not used solely to identify errors and measure coverage. In fact, they are often used to trigger embedded trace buffers that serve the function of an embedded logic analyzer. For example, a coverage property could be created to identify an interesting event within a design. Once that coverage property triggers, an internal trace buffer could be enabled to capture a set of data from an internal bus. The captured data could then be scanned out for further analysis. Hence, hardware assertions and coverage properties can be an effective mechanism to trigger other internal debugging logic.

Synthesizing hardware assertions and coverage properties into emulation is common practice today. It is supported by most EDA vendors, and results in improved observability and reduced debugging time. Synthesizing assertions into silicon to improve post-silicon validation is currently only practiced by advanced processor and SoC companies. However, as the complexity of designs grows, we should expect more interest in advanced techniques to improve post-silicon debugging. Establishing industry standards for hardware assertion synthesis, managing on-chip assertion status, and controlling hardware assertions during post-silicon validation will be necessary to ensure broad industry adoption.

[2] Tim Cheng: “The Changing Roles of Verification and Test in the Late-Silicon Era,” 2009 PROFIT.

Harry Foster is chief scientist for Mentor Graphics’ Design Verification Technology Division. He holds multiple patents in verification and has co-authored seven books on verification, including the 2008 Springer book Creating Assertion-Based IP.  Foster was the 2006 recipient of the Accellera Technical Excellence Award for his contributions to developing industry standards, and was the original creator of the Accellera Open Verification Library (OVL) assertion standard.

One Response to Synthesizing assertions into hardware for faster silicon debug