How Cadence, Intel and Xuropa accelerated the semiconductor design process by squeezing 15% more capacity out of a virtualized server farm

Companies have been virtualizing their data centers since the 1990s to increase the utilization of their servers, automate the provision of computing power and cut costs.

Virtualisation is a key technique in ‘cloud computing’, which is defined by the National Institute of Standards and Technology [1] as:

“a computing model for enabling convenient, on-demand network access to a shared pool of configurable computing resources (e.g., networks, servers, storage, applications, and services) that can be rapidly provisioned and released with minimal management effort or service provider interaction.”

The ability to access large amounts of computing resources on demand could help chip designers accelerate compute-intensive jobs such as verification and so get chips to market more quickly. Using the optimizations described in this feature could squeeze even greater utilization out of cloud resources, further reducing their time to market.

There are two main forms of cloud computing:

Some key characteristics [3] of cloud computing include:

Despite these benefits the semiconductor industry has been slow to use the public cloud, despite their potential advantages over private cloud offerings. Here are three reasons for this reluctance:

While virtualization has delivered benefits by abstracting away the complexities of the hardware, this abstraction also makes it difficult to guarantee computational performance metrics such as CPU, memory, and I/O bandwidth, because the real-time state of the underlying hardware is unknown. Without that state information it is hard to predict performance and impossible to match the demands of a particular job to the resources of a particular server.

You can make a ‘best effort’, setting initial scheduling policies for a particular server so that it has enough CPU, memory and I/O bandwidth to run a set of jobs simultaneously. As soon as the jobs start running, however, their resource demands may change. For example, one job may need more memory bandwidth than forecast, starving other jobs of the resources they need to run at the same time. Meanwhile another job may be under-using its allocated memory, releasing resources that could be reapplied if the hypervisor was aware of the opportunity and able to manipulate the resource allocations appropriately to match the dynamic requirements.

Cadence Design Systems, Intel, and Xuropa have jointly built an experimental cloud-computing infrastructure to solve this problem. It uses EDA tools from Cadence, HP servers based on Intel processors, the OpenStack cloud stack software, and a cloud platform from Xuropa. 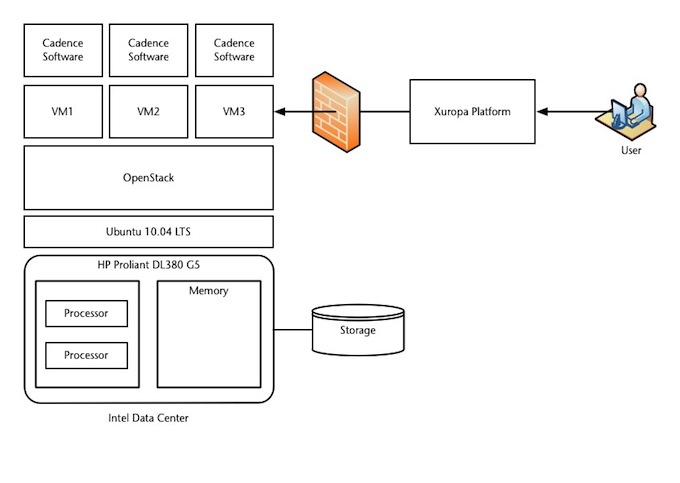 Users log in to the system through the Xuropa platform, and run jobs using scripts that control the Cadence tools. The idea is to simulate a chip design engineer using a browser to access the cloud and execute jobs without the need for IT coordination and support.

The key component in the overall cloud framework is its intelligent monitoring capacity.

The intelligent monitoring system extracts hardware statistics from system counters and monitors on each processor core in each processor in each server. The framework uses this information, along with the characteristics of each workload, to work out where each job should run and the best way to configure the overall cloud to meet the demands placed on the hardware resources.

These calculations are also guided by appropriate policies. After characterizing a number of EDA workloads using software and semiconductor designs provided by Cadence, we developed a policy based on memory bandwidth to guide the OpenStack nova scheduler to allocate workloads to the compute nodes that best met the needs of each workload.

The vast majority of cloud environments, especially in the public cloud, are not designed to support the kind of high-performance computing jobs used in semiconductor design and verification. EDA tools need a varying mix of CPU utilization, memory and I/O bandwidth as they run, and the mismatch between their resource needs and the architecture of the cloud results in lower application performance and less cloud efficiency than would be possible with some optimization.

We built our experimental set-up so that it modeled the heavy utilization found in most IT departments that are trying to maximize the return on their IT spend, so our results would be relevant to real EDA users.

Table 1
Benchmark results with and without optimization (Source: Cadence/Intel/Xuropa – click image to enlarge)

We found that although the Cadence tools were better at managing memory bandwidth utilization than expected, our framework technology was still able to demonstrate up to 15% improvement in cloud throughput, when compared to the same workloads run on a cloud without the intelligent monitoring and scheduling technology.

It will take vast amounts of computing power to design and verify the billion-gate chips that are on the horizon. Technologies such as the framework we have described here can increase the efficiency of private clouds, and may also help make public cloud offerings more attractive by driving down the overall cost of design.

This framework and similar optimizations are also contributing to a trend that is driving the cost of computing towards zero. Under these economic circumstances, it is worth asking whether a semiconductor vendor could move their design work to the cloud and become a ‘CAD-less’ chip company, in the same way that chip companies gave up their manufacturing assets and became fabless in the last century.

[4]       G. Soundararajan and C. Amza, “Online Data Migration for Autonomic Provisioning of Databases in Dynamic Content Web Servers,” in Proceedings of the 2005 conference of the Centre for Advanced Studies on Collaborative research, Toranto, Ontario, Canada, 2005, pp. 268-282.

James Colgan started his career as an embedded software developer for Panasonic in Japan. After six years in Japan defining and launching products (and reaching fluency in Japanese), James headed out to Silicon Valley where he spent the years prior to founding Xuropa in executive leadership roles (strategy, marketing, and business development) in high-tech, software and intellectual property companies.

Naresh is a software manager at Intel, responsible for new architectural investigations. He has been with Intel for 22 years in various roles, including EDA development, silicon design automation, Intel-HP alliance management, and launching virtualization technology on all Intel platforms.

Naresh holds a PhD in computer engineering from Syracuse University, and an MBA from Santa Clara University. He holds 4 patents and authored more than 20 publications in the CAD domain.