A look at USB 3.1, which offers data rates of up to 10Gbit/s, and the way that the USB 3.1 protocol has changed to support this rate.

The USB standard keeps evolving, with the recent USB 3.1 release offering data rates twice those of USB 3.0. The new spec is backwards-compatible with previous specs, and is expected to work with existing software stacks.

In practice, this means the USB 3.1 protocol offers enough bandwidth to carry full 1080p/60 HDTV signals, or to transfer data to storage devices at up to 450Mbyte/s.

As USB has developed, so has its terminology. Here’s a summary:

There are changes in every layer of USB 3.1.

Cables and connectors have been improved to cope with the 10Gbit/s data rates of USB 3.1. Although USB 3.1 will run over standard A and micro B type connectors, a type C connector has been introduced that can be used at both ends of a cable, and can be flipped over. The Type C connector is smaller and thinner than previous connectors, has 24 pins (more than twice as many pins as the previous connectors, to enable flipping), and runs at a slightly higher bus voltage of 5.5V, rather than 5.25V.

The higher-frequency operation of USB 3.1 means that designers may have to use repeaters to counter cable losses.

These repeaters must meet the transmitter and receiver specifications applied to a host or a device. They have to implement elastic buffers, skip insertion and removal, and support link power management commands, low-frequency periodic signalling (LFPS), and a new speed negotiation protocol in USB 3.1. They also have to be backward compatible with the Generation 1 link training and status state machine (LTSSM).

The USB 3.1 link layer definition tries to preserve a lot of the USB 3.0 link layer architecture. There are extensions in link flow control, but there’s a similar packet framing and LTSSM structure. The goal is to offer error performance as good as, or better than, that of USB 3.0.

USB 3.1 addresses an issue with the USB 3.0 protocol, in which a single-bit error can cause the link to go into recovery in two cases: with SKP ordered sets; or with start link commands. This can cause error rates of up to 5.7×10-15.

USB 3.1 uses a new encoding scheme, known as 128b/132b, rather than the 8b/10b encoding used in 3.0, which cuts the encoding overhead from 20% to 3%. The 4bit header in the 128b/132b scheme indicates whether the block represents control or data. The header is encoded in such a way that a single-bit error can be self-corrected, and a two-bit error can be detected so the protocol can enter a recovery process.

The USB 3.1 packet structure begins with the data packet header, which can be encoded to represent a deferred or non-deferred packet. The data packet header has two copies of the length field, to increase the robustness with which framing symbols are detected within the 128b/132b encoding scheme, given a single-bit error.

This classification enables type-one traffic to be given priority over type-two traffic. In turn, this means USB 3.1 can do a better job of ensuring that periodic transactions can meet their bandwidth requirements.

USB 3.1 adds a new start-up speed negotiation protocol, designed to get the link up to the highest rate supported by both devices. It uses the LFPS handshake introduced in USB 3.0, adapting it slightly to turn it into a pulsewidth modulation message called LBPM (for LFPS-based PWM message).

The LTSSM is updated in USB 3.1 with new states that support this protocol.

The most important change to the protocol layer in USB 3.1 is the addition of support for Multiple INs, which allows hubs to maximize throughput, and ordering rules for these Multiple INs. The precision time management scheme introduced in USB 3.0 has been updated with a new field for the transfer type and packet headers. The route string has been enhanced to include a weight for the device to host data packets. And there is more bandwidth for isochronous transactions.

Multiple INs play an important role in ensuring that the enhanced bandwidth of USB 3.1 can be exploited. 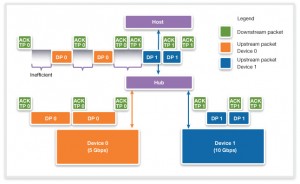 With Multiple INs, the USB 3.1 host sends an IN request to both devices and the hub buffers the data coming from the 5Gbit/s USB 3.0 device and transmits it whenever there’s capacity on the upstream port, maximising the use of the available bandwidth. 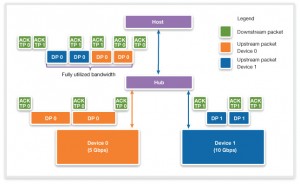 Figure 2 With Multiple INs, USB 3.1 bandwidth can be efficiently used, although hubs need to do more buffering (Source: Synopsys)

This means, of course, that hubs need more buffering capability. USB 3.1 hubs use store-and-forward strategies, instead of a repeater/forwarder architecture as used in USB 3.0. 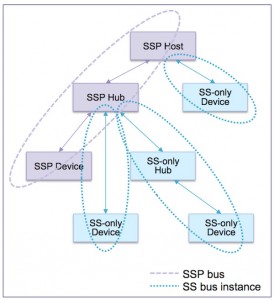 Figure 3 Mixing USB 3.1 and 3.0 hosts, hubs and devices leads to the creation of different forms of bus instances (Source: Synopsys)

In the diagram (above), multiple USB 3.1 hubs and USB 3.0 hubs are connected to a USB 3.1 host. This host can schedule Multiple INs to the USB 3.1 devices. It can also schedule Multiple INs to different USB 3.0 endpoints, as long as they are on different bus instances. A bus instance starts whenever there’s a transition between USB 3.1 and USB 3.0. However, the host cannot use Multiple INs when scheduling to USB 3.0 endpoints connected to a USB 3.0 hub.

Another addition to the protocol layer is transaction packet labeling, which identifies a packet as control, isochronous, interrupt or bulk.

Packet forwarding in USB 3.1 is designed to allow fair arbitration between devices, even if they exist in a lower layer of the connection topology.

The round-robin arbitration mechanism that controls access to the host, irrespective of where devices exist in that topology, uses weightings. 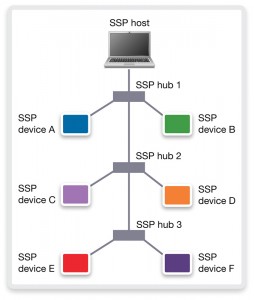 Figure 4 USB 3.1 arbitration mechanisms use weightings to ensure fair use of the available bandwidth (Source: Synopsys)

Each packet is given an initial weighting, depending on its speed, so Gen 1 packets get a weighting of 4, while Gen 2 packets gets a weighting of 8. The weight of the packet from a hub is the sum of all the weights of all the active downstream devices on it. Ports with heavier weights get proportionally more turns in the arbitration algorithm. In this way, devices at the lowest layer of a connection topology get fair access to bandwidth on the host.

The transaction packet labeling introduced in USB 3.1 needs some help from USB 3.1 hubs, which have to remember whenever there’s a transfer going downstream to a USB 3.0 device or hub. When that packet comes back upstream, it needs to attach a transfer-type label so that the rest of the hierarchy knows the type of transfer that applies to the packet.

Consider a USB 3.1 hub using Multiple INs to accept upstream packets at the same time from a Gen 1 device on one port, and a Gen 2 device on another port. Because the Gen 1 device is sending its data at half the rate of the Gen 2 device, its packets are sent to the upstream host as every third packet in the upstream link. This means the hub has to buffer an extra packet from the USB 3.1 device.

The shift to USB 3.1 from USB 3.0 brings a number of important changes:

Find out more about USB 3.1 and Synopsys’ implementation in its USB University USB 3.1 protocol overview video.

Find out about USB 3.0, which USB 3.1 builds upon, in this series of articles:

Eric Huang worked on USB at the beginning in 1995 with the world’s first BIOS that supported USB keyboards and mice while at Award Software. After a departure into embedded systems software for real-time operating systems, Huang returned to USB cores and software at inSilicon, which was acquired by Synopsys in 2002. Huang also served as chairman of the USB On-The-Go Working Group for the USB Implementers Forum from 2004-2006.