Thinner phones are going to need new connectors. Many designers are considering USB Type-C, and the related Audio Device Class 3.0 specification (ADC 3.0), for use in high-quality digital headsets.

The ¼in phone jack was invented more than 100 years ago to connect people who were using a new invention called ‘the telephone’. Today, the 3.5mm modern equivalent of that enormous jack has become ubiquitous, but mobile phone designers are looking for a new approach to audio connectivity so they can make handsets even slimmer.

Designers are considering many proprietary and standard USB audio protocols. One of these is the recent USB Audio Device Class (ADC) 3.0 specification, which is meant to enable industry to standardize on a protocol and so speed up consumer adoption. ADC 3.0 enables high-quality digital headsets with a local digital signal processor (DSP) to handle features such as adaptive noise cancelling, user-defined equalization, and hot-word detection (that is, spotting phrases such as ‘OK Google’ or ‘Alexa…’). The specification also defines power-saving strategies that should help it become the standard audio protocol for mobile phones that use the USB Type-C connector.

Analog audio solutions, typically using that 3.5mm jack, generally don’t use a lot of power. Figure 1 shows that audio processing for voice calls or MP3 playback is typically bursty, which allows functional blocks to enter lower-power modes between bursts of activity. Some manufacturers have implemented even more optimized power profiles for audio playback than shown.

Unlike analog headsets, USB audio headsets use isochronous transfers that provide the guaranteed bandwidth necessary for audio streams – at the cost of greater power consumption. The power profiles to support a USB headset are shown in Figure 2. The system has two more functional blocks (USB Host and USB Device) than the analog approach shown above. The additional blocks operate continuously in high-power mode, and some implementations even require the application CPU to stay in high-power mode continuously to feed the USB host with audio bursts to the speaker and process samples from the microphone.

The additional power required to support legacy USB audio is of little concern for a headset used with a plugged-in desktop or laptop with a high-capacity battery. However, legacy USB audio cannot replace the 3.5mm phone jack in mobile phones and other portable, battery-powered products, because it would drain the battery too quickly.

The ADC 3.0 specification uses this LPM L1 based power-saving strategy, even though LPM L1 is not widely used nor supported today. A successful proof-of-concept of this approach was built using Synopsys DesignWare USB IP and is shown in Figure 4, as follows: 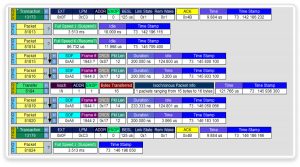 Designers can save power by putting the CPU and/or DSP system in deep sleep between USB bursts. It is also possible to schedule multiple audio bursts in advance, to save more power by leaving the CPU and/or DSP subsystem in deep sleep for longer – at the expense of greater audio latency. The acceptability of this approach will depend on the application.

The audio quality of headsets with analog connections is limited by the choice of ADC, DAC and audio processing in the phone, tablet, etc. Device makers trade off cost, power and quality and their choices, once made, cannot be circumvented. However, when device makers implement ADC 3.0, there are no ADCs or DACs in the device. Device makers can concentrate on reducing power, since they no longer have much influence over features, cost and audio quality.

ADC 3.0 headsets support up to 24bit/192kHz audio format for high-quality audio. Headset makers can add a local DSP to implement features such as microphone beam-forming, and active noise cancellation (see Figures 5 and 6).

It is also possible to use ADC 3.0 implementations of USB audio to enable the design of multipurpose headsets. For example, manufacturers could design a combined wireless Bluetooth and wired USB headset that charges the battery when connected to a phone or USB charger: Bluetooth is used for convenience and phone calls, USB for listening to music, watching videos or just cancelling ambient noise.

To implement ADC 3.0 in low-power products such as phones, tablets or laptops, designers will need a host controller that is compliant with the ADC 3.0 specification and which can control Link Power Management status. Synopsys’ DesignWare xHCI USB 1.1 controller was used for the LPM L1 proof of concept discussed here. A Synopsys PHY, available in mature, low-power processes for headsets and in advanced process nodes for hosts, also supports LPM L1 using proprietary extensions to the PHY/controller interface.

Audio connectors have been getting steadily smaller since the 1/4in jack was invented for telephones over a century ago. Just as it must have been hard to visualize the need for a 3.5mm jack for mobile phones then, it was equally difficult to imagine that the 3.5mm jack would itself eventually need replacing. That time has now arrived, and well thought-through implementations of the USB Audio Device Class 3.0 specification will enable the development of power-efficient, feature-rich, cost and quality optimized digital headsets that use a USB Type-C connector to replace the ubiquitous 3.5mm jack.

Morten Christiansen is a technical marketing manager at Synopsys.

The basics of USB 3.2, how to implement it in an SoC, and how USB Type-C connectors and cables are used in USB 3.2 systems.