Richard Pugh is the Product Marketing Manager for Mentor's Emulation Division. He holds an MSc in Computer Science and Electronics from University College London.

New markets for multimedia and high-definition video are helping drive silicon growth. One market which exemplifies that is unmanned aerial vehicles, or drones. A recent report from BI Intelligence estimates that investment in drone-powered solutions will exceed $12bn by 2021 (Figure 1). Against this backdrop, the drone segment is benefiting greatly and advancing rapidly thanks to its use of hardware emulation. 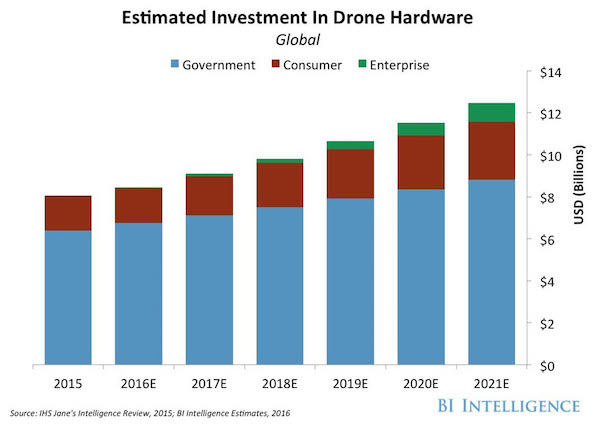 With drone applications expanding beyond military systems into consumer and commercial uses, the market is getting ever more competitive. To keep up with the market’s evolution, drone silicon suppliers are integrating high-definition video and other features into their SoCs.

Verification of the video capture circuitry, data collection components, and UHD-4K streaming video capabilities found in drones is challenging. The Economist recently reported that a single drone flight can generate as much as 100 gigabytes of data.

Such enormous output volumes (and the need to store them) makes drone verification a natural fit for emulation because the technique handles large amounts of streamed data very efficiently. In broader terms, here are four reasons underpinning the overall trend toward emulation:

Design sizes ranged from 15MG to 25 MG. Emulation performance was the critical factor. Multiple video protocol standards were used (HDMI, eDP and MIPI CSI-2). By using Veloce VirtuaLAB Multimedia, they found multiple bugs in both their DUT (RTL) and firmware that would have been very difficult to find without an accelerated verification environment designed for multimedia applications. 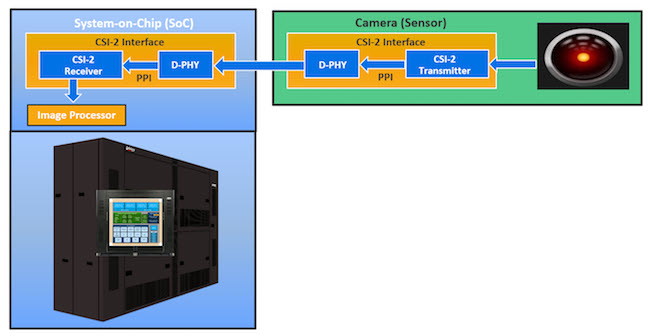 A virtual emulation environment is key

Let’s look under the hood. To perform effective verification of a multimedia SoC, there must be a virtual audio-visual device to generate or receive/display UHD-4K streams to and from the DUT (along with HDCP 2.2 encryption/decryption). This configuration allows teams to verify and debug the SoC pre-silicon in a software-based environment, providing user flexibility and a high performance.

UHD-4K verification solutions for use with hardware emulation meet these needs (Figure 3). With the UHD-4K protocol running as a software model on an emulator, engineers can use system-level applications to drive the verification and debug process from a PC or workstation. Instead of having to painstakingly build a testbench to create a UHD-4K stimulus, users can simply grab an ordinary video file, even a pre-existing AVI (or WAV, TIFF, or BMP) file, and auto-convert it into a UHD-4K stream.

Auto-generating a protocol-compliant UHD-4K stream saves time and risk since it eliminates the need to validate conversion compliance. The UHD-4K stream content is user-controllable by selecting a preferred pixel format or other parameters, and the UHD-4K output is compliant. Set up for the stimulus can be done in a wizard or command line, including scripting of multiple stimuli.

Having auto-converted the video file, the UHD-4K protocol software plays the resultant stream into the DUT running on the emulator. The emulator extracts and displays the audio-video output from the DUT and supports pixel-level graphical debugging of the displayed content. Users can trace particular streams or frames in detail, in video and audio.

An AVI can be exported from the DUT output to verify that it plays as expected in a real user application, such as Windows Media Player. This allows for inspection by the human eye that can pick up errors in audio and video more efficiently than stepping manually through waveforms. Users can still zoom-in to the image to scrutinize pixel data and examine audio detail, or export data for step-by-step waveform debugging if needed.

To facilitate debug, a programming interface can be used to export the display stream database and validate pixel data by comparing the actual against the expected outcome. If a problem is found, the log data can be output, showing content and time, so engineers can trace back on the emulator to what else was occurring when the error happened.

Debug can be a live process, capturing DUT output directly into a display and debugging on-the-fly to analyze and fix a problem immediately. Alternatively, results can be captured in a database for subsequent debug. In batch mode, automated regression testing can be performed and may also be scripted for increased efficiency and productivity.

With new multimedia standards and capabilities emerging to meet increasing demand, ever more companies are going to need emulation to churn through the enormous masses of data required for verification. The VirtuaLAB Multimedia application verifies any design that includes graphics, display/monitors, and HDMI (the widely adopted protocol for capturing and encapsulating video and audio used in multimedia equipment today).

Virtualized, multimedia-targeted emulation solutions reduce the risk for UHD-4K and HDMI developers by giving them a virtual environment in which to eliminate the fault errors at the pre-silicon stage. Virtualization further increases verification productivity by making emulator resources available 24/7 from anywhere in the world, and by significantly reducing the time to set up and run new projects.

Virtualization is becoming ever more common during the Covid-19 outbreak, even for complex technologies like emulation, and showing its strengths.

Sigasi has launched a software kit to provide inhouse tools builders and EDA vendors with a way to build in code-editing features.